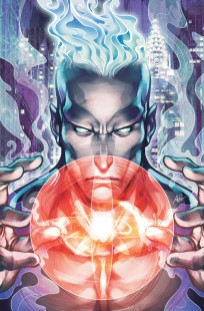 GONE TOO SOON FROM THE NEW 52! Captain Atom is Here!

We see a lot of Supermen. We see a lot of Batmen, Flashes, Spider-Men. All of them guys with different costumes and names but really just clones of a more popular character. We don’t see a lot of guys like Doctor Manhattan though; a being who is essentially indestructible and ageless with the power to control matter at the atomic level with a thought.

If we do, I’m unaware of most of them. Being a recent DC fan; I am somewhat familiar with Captain Atom.

As it turns out; Doc Manhattan is a clone of Captain Atom, not the other way around. However; in his new incarnation they seem to have a lot more in common. But first; Back story!  Originally created in the 1960s for Charltan Comics by Joe Gill and Steve Ditko. 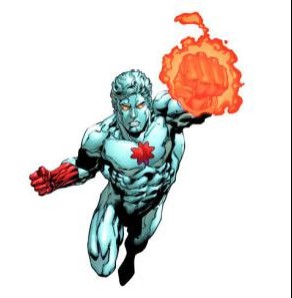 He served as the inspiration for Manhattan in Alan Moore and Dave Gibbons Watchmen. Funnily enough, Doctor Manhattan has become more popular than Captain Atom; almost how Superman and Captain Marvel squared off in the sales charts way back when. It seems with the New 52, DC thought Captain Atom could learn a thing or three from his more successful cousin.

It feels strange going back to superheroes after reading the surprisingly good Sword of Sorcery featuring Amethyst. Even more so after reading of another molecular inclined hero, Firestorm. This issue was intriguing in its own way. Not the wacky monster fun of Frankenstein or the 90’s tinted Fury of Firestorm, Captain Atom #1 is about a man who feels like a walking Atomic Bomb. I feel in this day and age we don’t really grasp the danger of Nuclear weapons. We understand the danger of radiation well enough but Atomic weapons? We may have left that fear in the past. It is important to keep in mind for reading this issue though. Captain Atom (whose real name is not given but I assume its Nathanial Adams) constantly has to worry about losing control and imploding, a potential Hiroshima any given second.

He spends his time fighting super threats as a way to help others and do his part. He starts off with the ability to absorb and redirect energy but soon gains the power to see and influence atomic reactions. The cost is it destabilizes his own atomic structure every time he does this. He seeks help from his friends at the Continuum, Ranita and Dr.Mangala. Ignoring their pleas to rest Captain Atom instead goes to prevent a Volcano erupting in the middle of New York City. As he absorbs the thermal energy he feels himself losing control and resigns himself to disintegrating if it saves lives. Meanwhile, some mutant alien rat things are freaking out in a NYC alley. 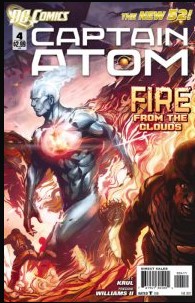 Some complaints; one we never see Captain Atom’s origin much less learn his real name, In his new debut to thousands of new readers. Second, the costume. Some smoke drifting off his scalp and the feeling that he’s a naked silver guy. We’ve already got one of those (oh damn, I may have stumbled onto to something horrifying. Moving on).

The story is not bad; there is a mysterious timer counting down throughout the issue giving some suspense to what happens next. Captain Atom has a personality; cavalier about his powers around others but internally he fears the day he loses control. He has an interesting supporting cast in a surprising local. The art really surprised me because the cover gives off this metallic digital aesthetic. Inside it is closer to a smoother version of Albert Ponticelli’s pencils who a water color polish. Not bad, just not what I was expecting.

I was glad Captain Atom was a guy with a personality, who expressed fear in believable ways to reasonable concerns. His willingness to sacrifice himself at the end is classic heroism.  I could really care less about some mutant rat alien, but I am interested in seeing how Captain Atom survives almost imploding in a volcano in the middle of New York City. This is my first time reading a JT Krul comic so I’m not sure if this is typical of his writing or if his best work is elsewhere but I think he did a reasonable job of writing a Captain Atom comic. It’s kind of a shame he picked this one as I don’t think it was the idle way to show off Captain Atom to new readers.