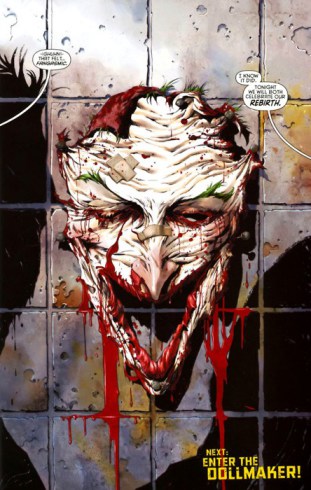 FACE OFF! The Story Behind The Joker’s Face!

The following comes from Tony Daniel (the writer / artist of the New 52 Detective Comics) via his Facebook page:

“THE STORY of how the ripped off face came to be. The Joker with the hole in heads splash was to be the original cliffhanger to Detective Comics #1. Joker was SUSPECTED of being partially lobotomized by the Dollmaker and left in a vegetative state (or so that’s what the crooked ME would tell Gordon).

WHAT WAS TO BE: Was the Joker faking it? Joker would’ve escaped from the Arkham hospital before a police transport, with the aid of Dollmaker’s henchmen. (Remember the nurse)? He would’ve disappeared for a year, and double crossed by the Dollmaker who would’ve held him captive for some time because he wanted to study the “worlds greatest villain.” Long story short, Joker would’ve killed Dollmaker and his cronies, except for the Nurse who at that point fell in love with him and helped him. DC felt the lobotomy angle was a bit too over the top. They wanted the crossover the following year to be between Detective Comics, Batman and the others. So Scott Snyder and I got on the phone to talk about what we could do for the crossover, “The return of the Joker.”

Scott told me he had an idea about Joker being unrecognizable to Batman. Where he takes his make up off, and we would get to see Joker’s real face. So I explained my Dollmaker villain and what he does to his victims. I explained he could just remove the Joker’s face. A bit more extreme than the lobotomy idea, certainly. But for some reason DC bought the idea. I explained that we could leave it ambiguous as to whether or not it actually was the Joker’s face or one of the DM’s victims. Wherein I would craft a story where Batman is in search of a faceless man who he believes is the Joker (guided by the face DNA) who also happens to be a serial killer. In fact, an idea I had, was that it wasn’t the Joker’s face in the cell, but actually the Dollmaker’s face. And Batman would follow the trail of bodies and evidence right into the Dollmaker’s lair. But DC really liked that it was actually the Joker’s face in the cell and went in that direction.

Anyway, even when writing a story like that, I like to have several ‘outs‘ or directions I could then turn to if one idea doesn’t work out. I think they did fine going the way they did in the end. Of course, I had to make my departure from Detective a bit prematurely due to being overworked at the time. I think fans like the current direction, judging by all the cosplayers dressed up with the torn face. It’s very cool to see, and I’m happy in my one issue where I handled the Joker, I left an impression, love it or hate it, to remember.”