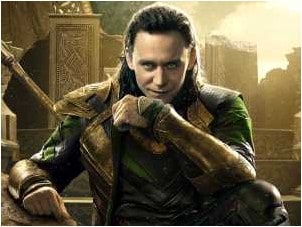 The creation of this article began with a few general observations that quickly snowballed into some extensive research and eventually finished off with some personal reflection.  As you know I’m relatively new to comics and for someone who is relatively new my exposure to Loki began with the Phase 1 Thor film and then progressed into the Avengers film and finally kid Loki in Young Avengers.  I will admit that in the first Thor movie Loki stood out and was one of my favorite characters in the film. I remember thinking the actor really nailed it. In saying that I was so mesmerized with Chris Hemsworth performance as Thor that there were no other thoughts in my head after the film.  Then Loki appeared again in Avengers and by this time I had done some extensive research (that’s what we call Wikipedia these days right?) I had a better idea of the god of mischief. I’m not sure if it was my newly acquired information or just a brilliant performance by Tom Hiddleston but of all those great names in the movie Loki was a bigger part of the post theater conversation.  Here began the fire inside me that burned for Loki.  He was not the typical villain.  For some reason I did not hate him.  For some reason I wanted him to win.  I did not want his evil plan to succeed but I wanted him to change his mind and fight alongside his brother.  Why did I have these feelings?  Could I be mirroring Thor’s feelings?  The possibility crossed my mind.  I see Thor as the hero therefore I see myself in Thor.  If Thor sees hope in Loki then I should too.  I chalked it up to compassionate hero and moved on, although this time my eyes and ears were pealed to anything Loki.

If I had to trace my interest in comics back to one moment, The Avengers movie is probably the point of inception. I wanted to know more about Loki and I wanted to know more about Thanos, thus the research began.  The comic reading quickly followed where I found Young Avengers, in fact the very first iFanboy podcast I listened to was Ron’s last show where Young Avengers #1 was his pick.  I went out and bought it and I am very thankful I did.  Kid Loki of Young Avengers quickly became my favorite character.  What is it about this character that draw’s me in?  To be blunt Loki is a lying scumbag (earmuffs).  Usually not my type.  However I always root for him to be good.  I always root for him to do the right thing.  Every time that he disappoints and every time that he lies I hang my head with shame.  But it is amazing how quickly I dust myself off and get back on the Loki horse.  The guy has a hold on me the reader, just imagine what he can do to all the characters.

At this point in the story we are getting closer to the Phase 2 Thor movie.  The excitement around the film generates conversation with friends where I find out that a new female friend really enjoys all the Marvel movies.  I have become such a huge fan of the Loki character I am equally excited to see Hiddleston as Hemsworth on the big screen.  I asked this friend if she was excited to see Thor to which she obviously responded yes.  I just tossed out the generic line, “Thor is awesome.” (in hindsight I should have went with “Do you like double fisting Mjonir’s”)  To which she answered, “Yes but Loki is better.”  Honestly I was very taken back by this comment.  I knew Loki was an addicting character but how did she?  We already had the “reading comics” conversation and I knew she had not read a comic book.  So she had the same Loki obsession as me simply from two movies.  This shocked me.  Why didn’t she like Thor? Even I would lick those armpits. Again I brushed it off and chalked it up to this girl being able to spot fantastic characters.  A relevant piece of information, this girl now has a weekly pull list including (drum roll) Loki.

As time went on I began to see more and more female Loki cosplay which I’m fairly certain was not of a drag queen nature.  Finally it hit me a few weeks ago (I may be a little bit behind the times).  At my LCS a girl walked in with a Loki hoodie (the hood had two horns, so cool).  My LCS was selling little Marvel bobble heads in a mystery box.  There is no way to know which bobble head you will get.  There were a number of different characters including two different Loki’s.  One Loki had a 1/12 chance of being chosen while the other Loki was the rarest at 1/144.  I watched this girl open up box after box trying to get Loki.  She eventually gave up after settling for Thor.  This is when it hit me, people love Loki and from my observation especially women.  I went home and flipped my copy of All-New Marvel Now! Loki #2 to the letter column.  Sure enough there are 6 letters in the back, 5 of those letters written by females.  I love the new Loki book.  I think it is funny, witty and adventurous.  I wonder if there was this kind of love for Loki before Tom Hiddleston.  I have no experience with Loki before the movies so all the information I am dealing with is based on current observations but it appears that interest in Loki (both male and female) has skyrocketed since the English born actor embodied the sneakily sexy god of mischief.  I wonder how many people there are out there who followed the same path I did.  Their interest in Loki slowly increased with every viewing of Thor and then took off with The Avengers film.

Reed Beebe (my own personal yoda) sent me many links of blogs dedicated to this very thing, a love for Loki. I have linked a few of them below for you to check out. More interesting to me is a link he sent me on the increase in female readership.  Comixology conducted a survey a few months ago to collect some information on their users.  They offered a free comic upon completion of the survey which was definitely enough to get me to participate.  The survey results are actually quite interesting.  First of all one stat that I personally subscribe to is that digital comics are a starting point and gateway to buying print.  I think there are buyers out there who might be intimated by the comic shop and feel more comfortable buying in the solitude of their own home.  Obviously there are those who prefer digital to print, but speaking from personal experience there are definitely those out there who go digital at first just to get a foot in the door.  Comixology’s results on core customers is of interest.  The core group is as expected, males between the age of 27-36 who have been reading print comics for a long time.  However the emerging customers are woman ages 17-26 that are newer to comics, with many reading digital comics for the first time.  Of buyers new to Comixology in the last three months 20% are woman and apparently this number is rapidly increasing.  There is a number floating around that on Facebook 47% of self-identified comic fans are woman.  I do not really put much weight on the Facebook number.  A fan of Marvel movies could be a self-identified comic fan, that does not mean they are purchasing comic books.  However the number is still something to notice and the Comixology number is definitely a positive number.  I think the difference in the numbers shows that there is still an untapped female buying market that is rapidly finding their way to either digital or print shops.  If the British charm and all around magnetism of Tom Hiddleston can tap into some of that market I am all for it.  A nice smile can go a long way.  It brings up the question.  Are we all under one of Loki’s spells? Could a quickie break the spell?  I’m not sure but the spell is working on me. 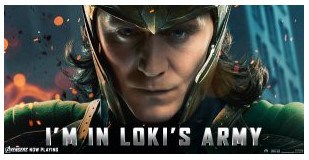