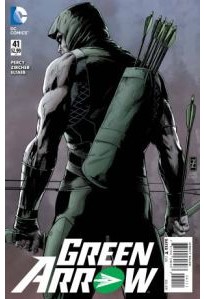 Much like Jeff Lemire and Andrea Sorrentino’s celebrated run, Benjamin Percy and Patrick Zircher have the task of softly relaunching the title while marking their own distinct vision.

Comparisons between the two are inevitable as Sorrentino and Zircher’s art feel like parallels. While Zircher has less abstraction, the colors and mood of the art feel the same in this as most issues of Lemire and Sorrentino’s run. Which isn’t a bad thing, nor should it imply Patrick Zircher is copying another artist.

The story is sort of a “day-in-the-life” which are few and far between. Citizens of Seattle, particularly African-American males, are being abducted suddenly in open air by a blur. Meanwhile, Oliver Queen ruminates on how philosophically deep Seattle is. He has enrolled his half-sister Emiko Queen in school and continues his duties as Green Arrow investigating an albino individual linked to the recent abductions.

What can be both a weakness and strength of Green Arrow is making him more like Batman. In comics this often comes across as cheap and makes the character seem like a pale imitation. In the CW’s “Arrow” it works because there is literally no Batman, hence the Arrow can stand on his own (most of the time). The idea of making Seattle feel like it has personality, let alone GA’s home base, is good but runs fairly close to becoming like Gotham in fostering disturbed individuals and plentiful chances to brood.

Emiko’s scenes are good but again she feels like an extension of Damien Wayne. Her exasperation at school and her classmates is a good foil to Oliver though.

Zircher’s art is the strongest part of the book, feeling solid and cinematic in the choice of camera angles and character expression. There’s also a sense of energy too, helping the book really feel like its own part of the DCU.

Overall: The story is good, the focus on Green Arrow being more street-level is sound, and the art is arresting. If the team can move away from Batman-related imitations, I can see this becoming a strong run for the Emerald Archer.