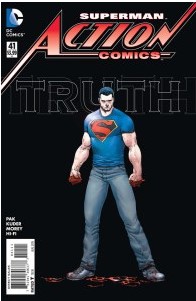 Through a chain of events we have to read “Superman #41” for (whenever it comes out), Clark Kent has been revealed as the Man of Steel and mostly depowered. What this entails exactly is unclear but it seems he has no flight, heat/x-ray vision/telescope vision, freeze breath, invulnerability and vastly reduced strength.

This issue deals with Clark making his way through the US, with only his wits and large roll of cash. Everywhere he goes he runs the risk of being recognized but can’t let go of his mission to help others no matter what. He returns to Metropolis, where he gets a hostile welcome from the police force but also a warm welcome from his old neighborhood rechristened Kent-town. Most of them rejoice at Superman returning home but others, like the police, force mistrust and even fear him despite his humble new status. As he rushes to help firefighters deal with a giant shadowbeast (which have been chasing him for months, but is only mentioned now), the Metropolis PD move in to dismantle Kent-Town.

This issue marks an interesting parallel with Pak’s previous issues of “Action Comics” where Superman had to use his great powers responsibly. Here, he has to do the same without the abilities that make Superman, Superman. It’s both a well-threaded story thread but also a back to basics approach. It’s a Superman resembling the 1939 iteration, but also the one Grant Morrison introduced at the start of the New 52 in 2011. I was a fan of that short-lived approach and thought it was a great way to reintroduce the man of tomorrow in the modernity, but returning to it only 4 years later makes me wary. Still, Pak and Kuder have proven to be reliable at turning out a good Superman comic monthly.

Overall: An interesting set-up issue, with great art from Aaron Kuder, has me interested in a down-to-earth Superman. It has the potential to make him more relatable, and give his stories dramatic tension since he is not as powerful.