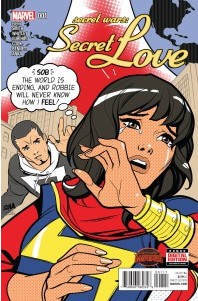 Among the many positive decisions Marvel made in designing their Secret Wars Event was throwing open the doors to all types of genres .Besides the usual superhero antics, tie-ins have ranged from the common (sci-fi and horror) to less frequently explored (Westerns). This week, Marvel adds another to the latter category: romance. Their Secret Love anthology takes the tropes of romance comics, blends them with superheroes and serves up a delightful one-shot.

The first story (“Guilty Pleasure”) is also the most ambitious. Written and illustrated by indie star Michel Fiffe, it revisits the Ann Nocenti/John Romita Jr. era of Daredevil. The set-up is more or less a classic love triangle: Matt/Daredevil loves Karen, but Karen is jealous, as lately her boyfriend seems to be infatuated with the mysterious Mary/Typhoid Mary/Innocent Mary/Bloody Mary/et al. And so, Karen trails Daredevil as he does the rounds of Hell’s Kitchen. Fiffe locates his tale in the Inferno domain, which lets him evoke a specific segment of Nocenti’s long run on the title (immediately following Nocenti’s initial Typhoid Mary arc, she penned the series’ Inferno tie-ins).

While Fiffe has acknowledged the personal importance of these issues to him, his homage is definitely tongue-in-cheek. There is a playful sense to the scenes, especially as Fiffe highlights some of the more absurd aspects of Hornhead’s career (“He’s fought Nazi hippies in San Francisco”). For his art, Fiffe strikes the perfect balance between channeling the work of another, while also preserving his personal style. Fiffe’s sketchy line fits well with Romita’s work of the period, suggesting an affinity between the two artists. This is especially true of Fiffe’s rendering of Romita’s version of Mephisto. Still, despite all these throwbacks, Fiffe never loses his own voice, filling the pages with his own idiosyncratic manner. This is best demonstrated in the panel depicting Mephisto’s defeat, which is full of cartoony, haunting ghouls. It is a fantastic piece of art which sums up everything that is so great about this story.

“Fan of a Fan” by Felipe Smith takes a different track. Smith travels to Doomstadt where young Robbie Reyes has just won another race in the Killiseum. In the stands, sits Lisa, silently pinning for her crush Robbie. Meanwhile, over at the Circle Q concession stand (yep, God Doom saw fit to preserve a little bit of Jersey in his New Order), Kamala Khan excitedly announces she has fixed the cash register. Bruno sighs his admiration. (Is there any reality where Kamala is not instantly endearing?). It is to Smith’s credit that he is able to slide the convenience store so effortlessly into Secret Wars. Indeed, it proves to be a clever set-up for Kamala and Robbie crossing paths and soon teaming-up together. Smith tosses in a twist at the end, which is more satisfying than the more predictable choice would have been. Smith’s art is strong as well, empathizing the goofy charm of the story.

“Misty and Danny Forever” by Jeremy Whitley and Gurihiru shifts gears again. It is set in a domain where Misty Knight and Danny Rand set aside their costume adventures, got married and had a child. As the time passed, though, they have found, as do many couples, the excitement has faded from their relationship. Whitley uses this set-up for an investigation of marriage and how to keep the flame alive. Yes, there might be some dinosaur punching, but the heart of this tale is Misty and Danny, sprawled out with popcorn in front of an old kung-fu flick (guess Pam Grier night was last week). Gerihiru’s art is good, even if it lacks the personal flair of the other installments. The overall look is more animation cells than comic book panels. However, it is fine and does suit Whitley’s more down to earth concerns.

“Squirrel Girl Wins a Date with Thor” by Marguerite Bennett and Kris Anka is about what happens when, well, Squirrel Girl wins a date with Thor. He is her prize for victory in the Annual Supertriathlon for Animal Welfare. Bennet’s story is the shortest of the bunch (a mere 3 pages), yet she packs in a lot of great character beats. She is ably assisted by Anka whose charming art really nails the laid back vibe of the narrative. Also, he gets to draw great sequences such as Squirrel Girl and Thor’s dancing, along with a very special ride the God of Thunder has prepared for his date.

The issue rounds out with “Happy Ant-Iversary” by Katie Cook. Cook re-imagines Ant-Man and The Wasp as actual insects, and then proceeds to show the Marvel Universe from their perspective. Wasp travels through Central Park, following a trail of clues that lead to an anniversary surprise. Like much of Secret Love, this tale has a quirky, off-beat sensibility which is delightful. Dialogue is told with pictograms, including a few puns along the way. The art is cartoony, which makes it a great match. The end result has the feeling of an extra-long Sunday comic strip. As an added bonus, New Yorkers, will enjoy the various riffs on Central Park landmarks.

Overall this was a strong anthology issue; all of the tales were a pleasure to read. Romance, despite its former heyday, has long been a neglected genre in comics. Hopefully projects like Secret Love, and the indie series Fresh Romance, will begin to rectify that oversight. As with the Secret Wars Event, comics in general will always benefit from a wide variety of story-telling.