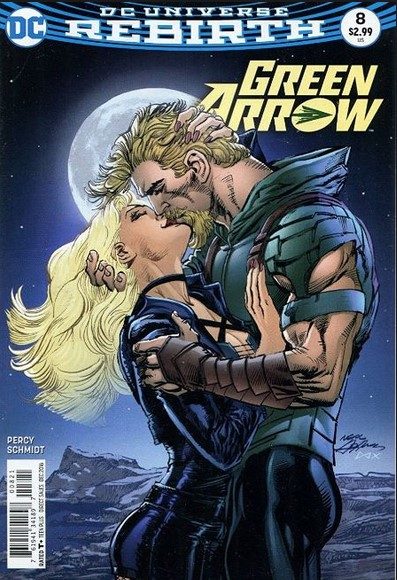 During the month of September DC Comics will be doing a line wide crossover event affecting almost all of their superhero titles. If you’d like to skip this event but still need your DC fix NBC has you covered with DC’s Post Crisis Rebirth. In it we will explore the many important, influential and just plain rad titles that came out of DC Comics original line wide reboot.

One of the common misconceptions I find with people talking about comics of DC’s post crisis period is that they became “grittier” with the embrace of Watchmen, Batman: Year One & The Dark Knight Returns. While it’s not wrong it’s like making the correlation between the sale of ice cream rising with crime rates in inner cities; technically it’s true but it doesn’t really tell the whole story. The above mentioned books and most of the other strong works that we saw from DC after Crisis Of Infinite Earths didn’t so much succeed from being grittier, darker, more real or any other meaningless signifier you assign to them but because creators were getting to put their stamp on super hero comics in a way they never had before. That’s not to say that gritty wasn’t a part of that as the late 1980’s was right about the time that politicians started their “war on drugs” which combined with the larger wealth gap and wholesale gutting of government services really meant a war on urban America and comics certainly started reflecting that in a lot of ways. But to lump them all in together is to miss the details and it’s those details that make the work special. For Moore, his time on Watchmen, The Killing Joke, From Hell & V For Vendetta where using the urban dystopia themes of the time as an exploration of western class structures, political strife and psychological horror while Frank Miller’s Daredevil, Batman: Year One, Ronin & The Dark Knight Returns are more mediations on the feeling of imenant danger living in an American city in the 1980’s and watching it decay in real time. Mike Grell’s time on Green Arrow is similar in that while it’s taking place in the same tapestry but it’s themes and idea’s are completely singular. Grell’s Green Arrow is primal and locked in on details while it explores very real modern issues of sexual violence, drug addiction, love and aging in a vision that is haunting in it’s own unique depiction of modern urban America. While Grell’s time on Green Arrow with the excellent Long Bow Hunters miniseries and extended ongoing run may not be thought of in the same breath as some of the more well known comics of that era is every bit as good as it was able to “modernize” the character by recognizing and exploring things that were primitive and universal about the human condition.  For Grell the city was a jungle and everybody was fighting to be an apex predator. His Green Arrow showed that through the eyes of an aging hunter. Gritty doesn’t do it justice.

Mike Grell started out drawing Superboy & Legion Of Superhero’s for world class asshole Jim Shooter in the early 1970’s before creating the too rad for this world Warlord at the publisher and eventually striking out on his own with creator owned titles Jon Sable Freelance & Star Slayer. In 1987 he returned to DC Comics to relaunch their legacy hero Green Arrow with a three part mini series titled Long Bow Hunters that he wrote and drew before launching the ongoing monthly series as the primary writer. Long Bow Hunters is pretty much a straight up masterpiece that is criminally underrated in comic book cannon as it does what Garth Ennis did to rescue The Punisher in the 2000’s over a decade prior but replaces the silliness with a very honest look at urban poverty and the people it effects. Oliver McQueen has moved to Seattle with his life partner Dinah aka Black Canary as they set up a floral shop while fighting crime in the evenings. From the first issue forward Long Bow Hunters jumps head on into third rail topics like crack cocaine or violence against woman but it also handles that with care and depth like few other comics ever have. Within the first issue Grell shows a crack head breaking through a glass window, a prostitute killed by a serial killer, Oliver and Dinah having role play sex and Green Arrow shooting arrows through the hand/ear of would be muggers but it also shows a very real conversation between Oliver and Dinah on the futility of marriage and children along with strong mediations from Oliver on grapaling the limitations of his aging and reflection on life choices of his past. As the story progresses we see the moral ambiguity and plot evolve as Dinah has to deal with post traumatic stress disorder from a kind of sex torture while Oliver uses the leftover cash he get’s from busting a drug operation to fund his superhero work. This is all done in some truly gorgeous visual story telling from Grell with a free flowing layout and rough pencils that look like a precursor to Sean Murphy but with a more classical and precision line work. At points the characters fade into black and white as they reflect or say something profound but when the book gives you action it jumps off the page with life and fury. This would continue into the ongoing series as much of the consequences from Long Bow Hunters would carry over to the latter book as we watch Dinah and Oliver continue to deal with her trauma. It is also ahead of it’s time progressive in the way that Oliver is the one that want’s to get married and have children while Dinah is the one refutes him and has to stand firm in accepting the choices the couple made in becoming urban vigalantes. Grell’s Green Arrow eschews super villans altogether in favor of focusing on the ways that people leverage and abuse their power to their own ends and often at the expense of others. This is where the jungle motif of predator and prey comes in as it makes Green Arrow the hunter. But it is also very much about going back to basics as long bows are used because of their simplicity. In Green Arrow Grell strips away all the continuity and DC Universe baggage that the character had accumulated to focus on stories that were concrete in their modernity and humanism without pulling punches on the dark reality. The specific focus that Grell takes on the effect of sexual violence against woman throughout the run in particular is as measured and thoughtful as it get’s in popular media as it is as unflinching as it is careful and empathetic. Rape is always fucking awful in Grell’s Green Arrow but the admiration and heroism that he gives to it’s survivors truly drives the narrative and spirit of the comic in a way that is nothing short of inspiring. You walk away feeling both the pain and the triumph of the victims as they end up being the true superhero’s in the story.

While the exploration of themes of sexual violence against woman is central to Grell’s run on Green Arrow you could say the same with the way he approached drug addiction, organized crime, poverty, corruption or even serial killers in that he manages to incorporate touchy subjects without them feeling exploitive. Miller’s comics might be the most visceral and Moore’s might be the grandest statement on inner city life in the 1980’s but Grell’s Green Arrow is the realest in the best way possible. That his characters are so relatable and his handling of there challenges is so sympathetic and compassionate you can’t help but feel so much in these books. It’s been said that comic’s creators learned the wrong things from Moore and Miller’s seminal late 1980’s work as they saw “gritty” as the be all end all of displaying realism in comics but reality is way more complicated than that. Real life is hard as fuck but it’s also extremely joyful. It’s insanely challenging but overcoming those can be highly rewarding. It sucks until it’s awesome. While a lot of comics creators may have missed that, Mike Grell quietly gave some much needed perspective on Green Arrow and with that created a timeless comics story about the struggle, pain, triumph and joy of modern existence. Real life can be gritty, messy and so much worst but it also can be lot’s of other things and Grell’s Green Arrow is about all of it and it’s that which makes it great.