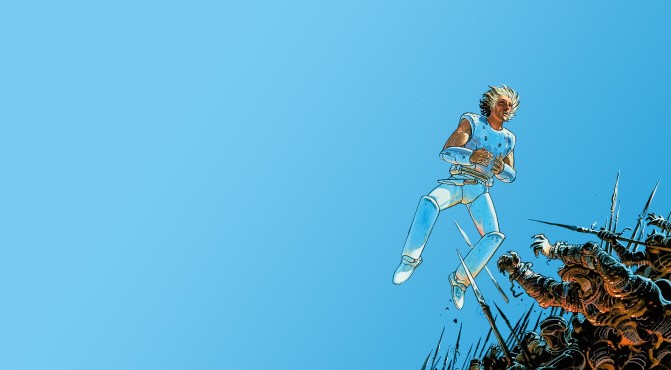 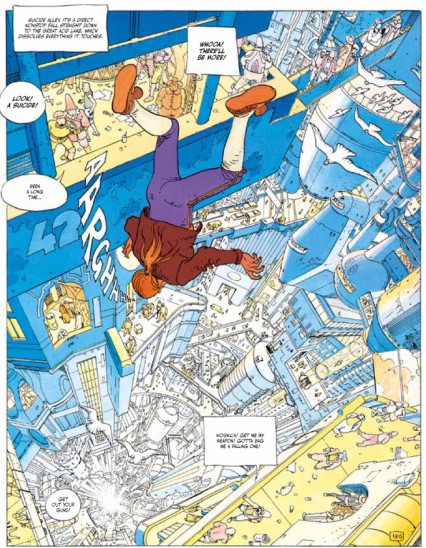 Anybody that pays close attention to pop art has the “on my list” stuff that you want to check out but missed out on when you first jumped in the fan base. The directors movie that was underappreciated on it’s initial release, the author that you weren’t aware of who you would supposedly love or the album that was canonical that you never got around to hearing. Because of the sheer volume of material every comics fan has a huge back catalogue that they plan on reading someday and if you don’t your doing it wrong. The writer who initially sparked my interest  in returning to comics in my twenties has only read one Alan Moore comic; I’m not writing this to shit on dude because honestly if I could write about comics 1% as good as Brandon Soderberg does about anything including comics I can walk away from this site knowing I accomplished something but more to illustrate that the depth of readership in comics is fluid and anybody claiming expertise in the medium is likely full of shit, arrogant or both. So you probably have had the experience of reading that comic series that everybody told you about and being like “that was great” but it’s rare that something can exceed your expectations in a way so disproportionately to what was already very high hopes to begin with but then you if you were like me a few weeks ago you hadn’t read The Incal yet because there are very few comics ever created in the history of the medium that are this imaginative, this thoughtful, this heartfelt or this good. I have a list of the seventy best comics ever created. The newest title on that list is the first volume of Uncanny X-Force 1-20. The oldest is Jack Kirby and Stan Lee’s Fantastic Four. The vast majority of it is late 1960’s to the late 1980’s or the early to mid 2000’s from Marvel & DC comics or the can’t not be there indie books like From Hell, Love & Rockets or American Flagg. After reading The Incal I immediately put it fourth on that list trailing only The Dark Knight Returns, All Star Superman & Morrisons New X-Men and if you told me that The Incal was better then those books I couldn’t give a valid argument against that statement. The Incal is just that good and while it’s expensive, maybe hard to find depending on where your from and a large, expansive reading experience it will be worth more then every penny you pay, all the effort you take finding it and all the time it takes consuming it and while I may praise a lot of comics on here and I stand by almost all of that (sorry for anybody that listened to me on Paul Cornell’s Wolverine) there is nothing I’ve written about here that on my first time reading experience has been anywhere close to being on the level as The Incal. There has been nothing like it before or since in my breath of experience. 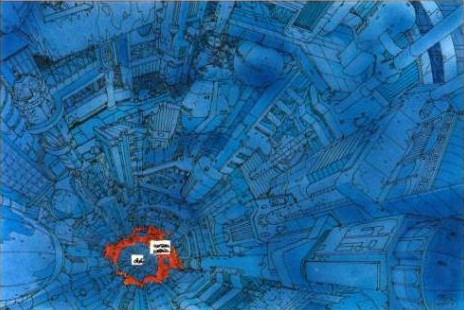 The Incal is comic written by Alejandro Jodorowsky and illustrated by Moebius. Initially created and published in France, it’s the centerpiece of what would later be referred to as the writers Jodoverse or Metabarons universe and has been reprinted in English three times most recently in September of this year by Humanoids publishing. Jodorowsky is more well known for being a visionary film maker whose worked explored themes of spirituality through a lense of ultraviolence. He is perhaps most notable for originally being the director pegged to adapt the science fiction novel Dune where he was set have the film star Salvador Dali, Orson Wells and Jodorowsky’s own son, feature original music by Pink Floyd, Magma & Henry Cow while having a script that would have made for a 14 hour long movie. In the end no studio would budget his vision and eventually David Lynch would make a much more straight laced version of the movie years later. Think about that for a second, David Lynch was the conservative choice in a binary between him and Jodorowsky. In addition to his film work Jodorowsky has an extensive comics bibliography dating back from 1966 to today including several stories illustrated  by the late French artist Jean Henry Gaston Giraud or as most know him by Moebius. The extent to which Moebius has revolutionized and influenced the comics medium cannot be overstated for the breath of influence it has had all across comics. Basically if you’ve read a copy of Saga, East Of West, Prophet, Thanos: The Infinity Revelation, Avengers, Rai, Bucky Barnes The Winter Soldier, Infinity Man & The Forever People, Guardians Of The Galaxy, Rocket Raccoon, Alien: Fire & Stone, Mind MGMT, Uncanny Avengers, Annihalator, Batman/Superman, Action Comics, Multiversity, Roche Limit, Thor: God Of Thunder, Captain Marvel, Pretty Deadly, Shutter, Starlight, Lose, Avengers 100th Anniversary, Transformers vs GI Joe, Low, Black Science, The Wake, Supreme: Blue Rose, Captain Victory & The Galactic Rangers, Zero or basically any comic art that made you say “whoa” instinctively, chances are the Moebius influence is entrenched in it’s DNA. The scope and imagination with which he illustrates his comics is unmatched by just about anybody short of Jack Kirby and in reality he’s probably the only comic creator that could really go toe to toe with him in that regard but because the vast majority of his work was published in his native France his material can be difficult for American audiences to collect. Moebius comics are infamous for their cost and that’s even more true for the rare English transaltions of his work. The work he has done directly in English has been the writing on a Little Nemo comic, some art for a Halo graphic novel and perhaps most notably Silver Surfer: Parable with Stan Lee. Before Incal I had only experienced Moebius art in Parable and while that is great it is nowhere near matching the manic energy of his French work and The Incal is regarded by some as the greatest illustrations he has ever done. 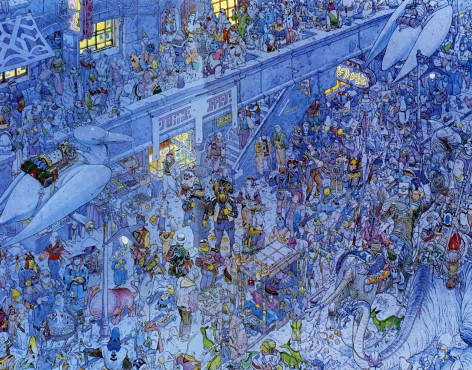 The Incal is a future dystopia story that evolves into a treatise on spiritual enlightenment by morphing at every turn as the story progresses from one fantastic setting to the next. It hits the perfect medium of expansive science fiction and relatable personal journey that will remind you of being a child and discovering the wonder of science fiction and epic story telling for the first time. It centers on John DiFool, a “private eye” that is content to waste away his life on whiskey and android prostitutes before he comes in contact with “The Light Incal” essentially the positive light force which in turn brings about his call to adventure as forces for light and dark surround him in seeking out the power of the light Incal. This leads to an expansive cast that end up with John including two princesses; one of which he falls in love, his biological son that he had by the other, a master assassin that has guarded the boy all of his life, a warrior with a wolf head and DiFool’s pet bird that swallows the light Incal and becomes sentinent in the same way as his human counterparts. It’s a ragtag Star Warsesque bunch that is reluctantly tasked with saving the universe from the forces of “The Dark Incal”, the dark half of the light incal, and chief among the reluctant faction is DiFool himself, a man that is constantly being pushed and pulled towards doing the right thing as he wants nothing more then to go back to his “homeowhores” in spite of the utter demise and oblivion all of existence is facing. The world building is contiously fantastic, expansive and mesmerizing as the locations, setting and logic of the universe are always expanding from beginning to end. The concepts and execution of vision from Jodorowsky and Moebius is in complete synochracy while the illustrations is purely breath taking in the manner of it’s originality, detail and scope. But at it’s center the brilliance is John DiFool’s non journey that does not give him the easy victory or answers while creating a fantastic allegory for the sins of the past repeating themselves, the futility of complacency and the necessity for individual transformation. It’s final page is a beautiful conclusion for the story that manages to allow you to feel everything you just read in one final page like nothing I’ve ever seen before. 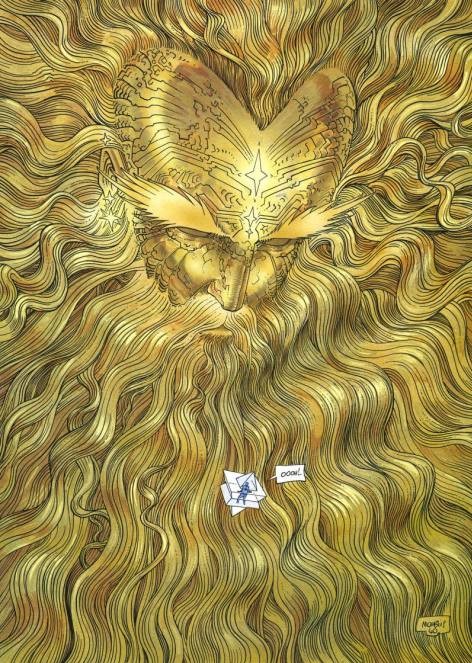 If there is one phrase you could assign to The Incal as a summary of it’s brilliance “like nothing else” is the most pure and accurate description I could think of. The fact that it can be such a dynamic influence on close to 70% of 2014’s best comics while still feeling completely singular and superior over thirty years past it’s creation is a testament to it’s overwhelming excellence. But The Incal is never too high concept or up it’s own ass as it’s story is as easy to follow and relatable as anything on the stands and can be approached from almost any perspective with an open mind and desire for wonder. If we look at comics in 2014 and think about the importanace of creator owned books it is tempting and partially accurate to point at successful properties like Watchmen, New Gods, Love & Rockets, American Flagg, Y The Last Man ect as pioneers of the genre but I’d argue that if you were to look at the most successful creator owned books in 2014 The Incal is perhaps the most important in setting the tone and ambition for these comics and by extension of the importance that creator owned work plays to the comics medium overall. Anybody that consumes a lot of art is going to have a hard time being truly floored by that type of art the more they take in and that’s doubly true when were talking art from over thirty years ago. When you buy comics weekly for a little while you really start to feel like you’ve seen the same thing over and over again depending on how you look at it. The Incal is the exception, the alpha, the omega and the cipher for which modern comics as a medium function and I gaurentee if you haven’t already experienced it’s wonder that it’s the best comic you’ve haven’t read yet. You can roll your eyes or disregard this altogether but if you do read The Incal you’ll thank me for it after you pick your jaw off the floor. Look out the window when your done with The Incal, it will look much more beautiful then you ever remembered it being before. 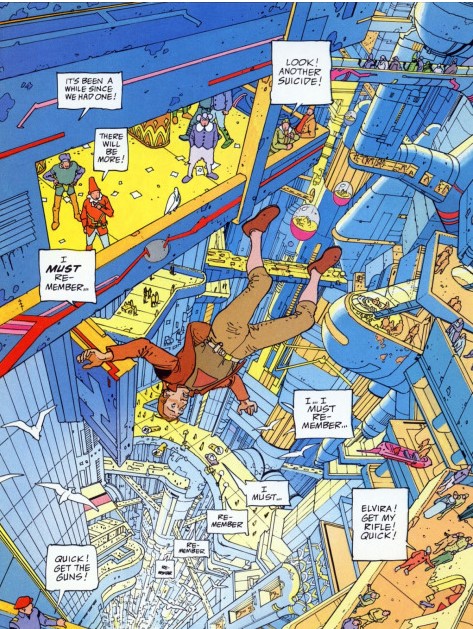