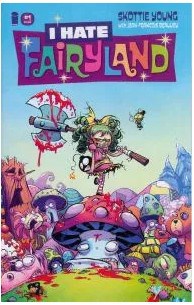 Review of I Hate Fairyland #1

There comes a time for many creators when they wish to work against expectations. Over the past few years, Skottie Young has steadily built up a reputation as the “cute kids” guy. His first break came illustrating Marvel’s well-received line of Oz comics, which led in turn to steady work producing adorable baby variant covers for the company. These proved popular enough to be spun into their own limited-series, the Secret Wars tie-in Giant-Sized Little AvX. Despite a rather unwieldy title, Young’s AvX book was a delightfully whimsical romp through the Marvel Universe. It was pure fun. This week, Young cycles back around to Oz territory with a riff on children’s fantasy literature. However, as its title suggests, I Hate Fairyland is not a gleeful stroll through sepia-tinged tales of old. Instead, Young has produced a bloodily vicious send-up of the genre. What remains the same is Young’s talent for crafting a fun story. Well, assuming that you regularly laugh at liberal doses of black humor.

I Hate Fairyland begins in standard fairy tale fashion with a seemingly every day young girl. Gertrude looks content playing with her stuffed animals, yet the narrator announces that she wishes she “could be taken away” to a magical realm. Right on cue, the floor opens up, sucking her into a black vortex. The narrator continues in the posh tones of the genre (“A grand adventure awaited her”), yet Gertrude is far from reassured. Pulled out of the soothing pinks of her room, she plunges through empty darkness. She is positively scared out of her wits, screaming and fearful of death. When her plummet finally ends, she is surrounded by a wide assortment of fantastical creatures. (Young’s talent for either design or facial expressions should never be underestimated). At the center of this tableau lies Gertrude, badly battered and bruised. Gertrude gives little indication of being enticed by any quest. She simply wants to go home. Which, of course, can solely be done in the manner of a quest. And so she sets out with on a journey that she is told should take a day’s time.

Twenty-seven years later, Gertrude’s mood has only soured. Nearly three decades have passed since Gertrude arrived in Fairyland and all she has to show for it is a body that magically does not age and a temper that only grows sourer by the panel. In the span of two pages she not only kills off the story’s narrator but also gleefully slaughters literally an entire sky of stars. Gertrude is a force of nature, storming through whatever situation she encounters, unconcerned with any consequences from her actions. In many ways, she is a brat. She is, however, an entertaining one and a fitting guide for Young’s story.

Young’s art serves his tale well. As mentioned above, Young’s creativity as an illustrator is on full display. The issue is full of striking creatures, some adorable, some less so. He has managed to introduce an adult sensibility into his style without losing any of the charm that often animates it. For example, a fallen star flops down dead in a pool of its own blood; above it in place of the traditional skull symbol to indicate death is a skull within a star. There is a large amount of wit evident in these pages. Young is clearly having fun with his concept.

I Hate Fairyland is a logical progression from some of the other work Young did for Marvel. His Rocket Raccoon book gave him the opportunity to break away a little from the pure goofy sensibility to explore more character based and sophisticated narratives. His other Secret Wars project, the one-shot Howard the Human allowed him to submerge himself in the gritty world of private eyes, though, once again, reflected through Young’s own perspective. Young draws on his past experiences with Marvel to take the next step in his career: his first creator-owned comic. Maintaining this high level of hijinks without slipping into monotony can be tricky. If Young is able to keep the spirit of the series fresh, I Hate Fairyland promises to be a wickedly good time.