My NBC readers I would like to let you know that I have failed you. One of the chief functions of my writing here at Nothing But Comics is steering you, the reader, towards great comics. So for all the precious indie comics that I’ve championed on the site or all the Marvel books that I swore up and down were awesome I really whiffed on one title and that was Afterlife With Archie. This should have been a no brainer, I love zombie stories, I’m not reading any zombie comics and I love Francesco Francavilla, an illustrator that our own Josh aka Ithosapien once enquired if he had “made a deal with the devil” to be as talented as he is. Still early on in the sites inception Cosmo sent out one of many mass group e-mails asking if anybody was going to be reading Afterlife With Archie and my response was meh. Yes it’s Francesco Fracavilla doing horror but Archie? Really? So I’ve spent the better part of the year seeing all the praise heaped upon the title while wishing I could see some Francavilla interiors, still asking myself that central question to the conundrum, Archie? Really? Yes really because Afterlife With Archie is a fantastic comic that takes all the tropes of great teenage horror and then morphs it into something far more interesting. 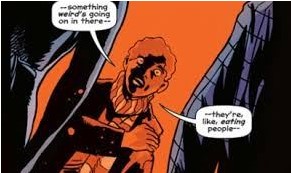 My experience with Archie is pretty minimal as I’ve always understood the basic dynamic of the book and all the main players without ever remembering having read the comics. Looking at it from the outside Archie seemed to be pretty basic in nature, Archie has two girls fawning over him and Jughead like’s hamburgers. Again I don’t think I’ve ever read an Archie book so I’m sure that’s a huge generalization. Over the last year as the publisher has tried new and different ways to reimagine the characters like the introduction of Kevin Keller or The Fox relaunch or the death of Archie I didn’t think much of it because in the end it’s Archie, I have all these books by Warren Ellis, Brian K Vaughan, Matt Fraction, Scott Snyder, Jonathan Hickman ect. why would I read something out of that publisher? Deep down I knew that Afterlife had to be more then that, the creative team was too talented and it was getting too much love for it not to be borderline decent. But it’s more then decent, it’s hauntingly beautiful, truly scary, smartly written and fully realized. Forget everything you think you know about Archie because Afterlife defies even the greatest of expectations.

Afterlife starts out on the very basic premise of the franchise but introduces a little darkness with Jugheads dog getting run over. That little bit of darkness set’s in motion a  whole chain of events that ends with Riverdale in flames,

half the cast gone and, I kid you not, Cthulhu.  It really is a genius concept when you think about it as Archie is almost the perfect starting point for a teen horror story, all the players and archetypes are there and the backstory is basically built in because of everybody’s familiarity with the franchise due to the ubiquitousness that comes from 70 years of publication. Still in lesser hands that becomes a crutch where as in Afterlife writer Robert Aguirre-Sacasa humanizes his cast and creates a plot for them that feels truly terrifying. A problem I have with a lot of modern horror fiction is that it generally rests on it’s tropes while attempting to shock and scare by virtue of the sheer brutality in it’s narrative and while that clearly works for a lot of people I find it pretty fucking boring. The beauty of Afterlife comes from the way Sacasa pushes the story past all that to the point that it transcends the genre, it’s history or any preconceived notions you might have had going into the book. It’s a horror story with a well worn starting point that manages to completely up end it by exploring the details and expanding the concept. Also this is a comic drawn Francesco Francavilla and I’m not sure I need to say anything more on the art outside of that but in the interest of full coverage I’ll posits that Fracavilla was born to make a comic like this and he is the essential element that takes Afterlife from being very good to great as his pulp illustration style gives the book it’s creative voice that is unlike anything else. While Scarra certainly writes very well here don’t get it confused, this is a showcase for Francavilla as he turns in some of the best pages of his career and proves that he’s an artist worth following no matter what comic he illustrates. He’s one of the best of this era; period.

What’s perhaps most special is how Afterlife With Archie manages to fire on all cylinders because of the care that is given to the project. Like with IDW’s Transformers vs GI Joe they could have just put any 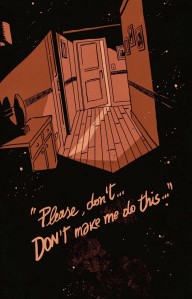 old creative team on here and done a run of the mill zombie story and still sold a lot of copies and gotten a lot of press just based on the sheer novelty and popularity of the property and concept but they did more than that, they went big and swung for the fences and the result is a horror comic that defies even the highest of expectations by taking all the tropes of both the property and the genre and expanding that naturally. I watch horror movies all the time. Even outside of October they are always on. Horror can be a lot of things but Afterlife With Archie is the best that I’ve seen in the genre for quite some time. Everything was tranquil and run of the mill ordinary in Riverdale but Scarra & Fracavilla burned it all down and that is how you make an Archie Zombie book.