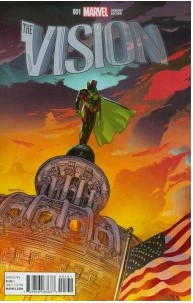 Review of The Vision #1 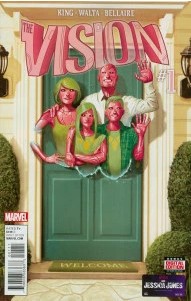 This week’s edition of All-New All-Different launches from Marvel brought the usual mix of high visibility (Extraordinary X-Men, the inevitable new Deadpool title) and second-tier properties (Hercules). Somewhere in between these two categories is The Vision. The Vision has a long, rich history, and is held by many fans as one of the greatest Avengers ever. Yet, unlike several of his peers among Earth’s Mightiest Heroes, he has never sustained an ongoing series. The most extended run would have been a twelve issue mini he shared with his then wife the Scarlet Witch. On Wednesday, Marvel released the initial issue of a new solo series, which they hope will reverse this trend. It is a mostly strong debut.

Writer Tom King has taken Vision out of New York and resettled him in Arlington, Virginia. The Vision is supplementing his Avengers’ duties with a post as adviser to the President Of The United States Of America. This setting of government employees residing in D.C. suburbs is presumably one familiar to King from his days working in the C.I.A. Indeed, King’s sensitive take on the foibles of everyday life is the strongest element of the writing. The issue opens with narration discussing why most people choose to move to places like Arlington: they got job related to government, they hope to do their part to change the world, they wanted the safest neighborhoods for their kids, yet near enough that they could benefit from the culture of a metropolitan area. Along the way they made compromises, altered their goals. It is a lovely opening which laments what might be lost with the passing of time without ever sounding smug or judgmental. This extends to King’s portrayal of George and Nora, a couple who pay a neighborly welcome visit to the Visions. George is clearly biased against the unconventional nature of the Visions yet King never lets this cheapen the character. He is not a fire-brand hater, simply another middle-aged man living a quiet life. Indeed, when the narrator describes what will be George’s final moments, it is one of the most poignant moments in the issue.

Sharp-eyed readers will note that I referred to the Visions. The Vision has built for himself a synthezoid family: a wife and two children (twins intriguingly enough). In the Pym/Ultron family tradition, brainwaves were used from someone else for the wife, then merged with his own for the children. (King is mum on who that woman was or if her contribution was voluntary). This creates some interesting social situations as the family tries their best to be like any other on the block. As might be imagined, the twins’ first day at high school is a bit on the awkward side. As he does in other sections, King has a sharp insight for human nature which carries over to the Visions as well. For example, when Vision’s wife grows silent during his description of a gift from “the Witch.” King makes good use of such details, most strikingly in how he returns to a floating water vase presented to the couple by Silver Surfer. It has a great payoff at the end, when the family’s suburban idyll is rather violently jolted asunder.

Walta does a fine job of conveying these subtle emotional notes through his art. Many of the scenes have a wistful sense to them, which is reinforced by Bellaire’s autumnal color palate. Walta’s art has just enough of a cartoon element to highlight what makes the Visions stand out from their surroundings, yet not too much as too tip anything into caricature. Then when danger strikes he is able to render it with the proper visceral force.

There is a lot to recommend in this issue. However, there is also something which does not feel entirely right and it is very much the character of The Vision himself. Long known as one of the most empathetic of heroes (his most iconic moment involves him crying), The Vision recently purged all of his emotions from his memories. As a result, his is no longer the same. He sounds more like a generic robot and less like the synthezoid that fans have loved for the past few decades.

I trust that Mark Waid (who is writing the Vision as part of the All-New All-Different Avengers) and King have a long term plan for the character which will hopefully resolve these concerns. For now, though, I can say that King’s new series is a great comic book, but I cannot say that it is a great Vision comic book.