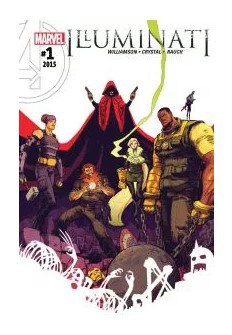 Joshua Williamson has made a name for himself in the last few years. I knew he had something special when I read the first volume of Ghosted. He later went on to create Nailbiter and Birthright. Two high intensity, highly entertaining comics. This past summer he proved that those skills can carry over into the marvel world when he wrote a fantastic tie in to Secret Wars titled Red Skull; although it ended unsatisfactory, I blame that on the shortness of the arc, not the execution by Williamson. All these fantastic books have one thing in common; Williamson makes the villain relatable. Starting with his Image titles and carrying into his Marvel work, Williamson strives writing the “bad guys”.  He creates deep and rich characters. He strips them down and shows us what it is like to be on the evil side of “good vs evil”. The label villain isn’t always as black and white as you may think, sometimes it boils down to one decision, one moment, that could label you for life. Enter Illuminati. With Williamson’s track record on handling the humanity of villains, Illuminati is a perfect fit.

When you step back, Illuminati is the story of a group of criminals who want to put their name on the map. A group of criminals tired of always losing to the Avengers. It is their time to win. Bad guys all over the world are winning these days, why not The Illuminati? However, when you get a little closer, you see that this book is about the fight people with a criminal record have to face to regain a “normal” life. Illuminati #1 is about Mary MacPherran also known as Titania. She has been released from prison on parol and only wants two things out of life. She wants for her husband to also be released from prison and she wants to live a normal life, a life free of crime. She quickly finds out that there are few in this world willing to give a second chance. Once criminal is slapped beside your name, good luck getting a job, or even being trusted (editors note: future Marvel/Black Panther writer Ta-Nehishi Coates has writing extensively about this problem in the USA). Mary is fighting the urge to slide back into the life of crime. She struggles daily with the temptations to steal her way to a better life, but she knows that if she does that, there will never be a chance for her and her husband. Mary gets a job as a security guard and after doing her job and protecting a pawn shop from an armed robbery she is taken into custody for using her powers. This is where she starts nearing the breaking point. She can’t even do her job without being questioned about it. Luckily for her The Hood comes to save the day, and offers her an opportunity she can’t refuse. She desperately wants to get out of the life of crime, but the world has forced her back into it. With no other options she accepts the job and you have your newest member of the Illuminati.

Joshua Williamson is the right man for this story. I pain for Mary. I see her struggling and fighting to enter back into society, while every single person slams a door in her face. When she finally makes the choice to join The Hood, it is completely understandable. Shawn Crystal gets his shot at a big ongoing Marvel debut  and does a fantastic job with the character work, which is exactly what a Williamson book requires. I see shades of Sean Murphy in his characters expressions. Mary is the team member that really sticks out, probably because she is in most of the panels, but she always has this tense look on her face. It is easy to see that she is having a hard time with this new life she has chosen. There is also a nice piece of flare that Crystal adds, whenever there is an explosion or someone crashing into something the sound effects are written with the scattered debris. It is really cool vision that bring the noises to life.

If you like Josh Williamson you will love Illuminati. Issue #1 takes a look at the tough road people face daily when they are judged by past mistakes. Next issue we get to meet the whole team! I can’t wait.