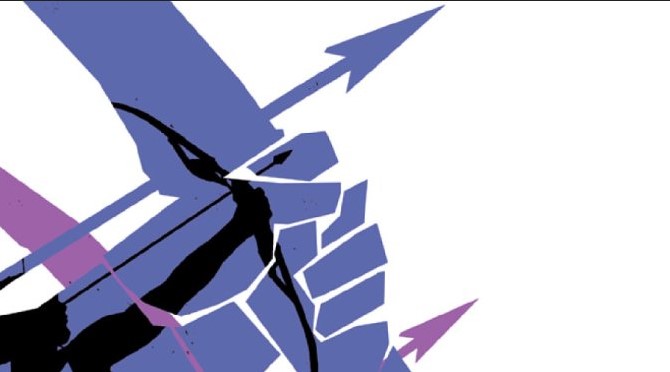 Requiem For A Hawkguy

With word that the final issue of Matt Fraction & David Aja’s Hawkeye will arrive after the series has gone into a state of constant delays over the last year and that its replacement is coming hell or high-water in March of 2015, it’s a possibility we’ve seen the last issue of the series already or, best case scenario, we will see the final issue within the next couple months. Writer Matt Fraction has turned in his final script and appears to have moved on from Marvel for the time being, while artist David Aja has remained relatively quiet save for next issue’s preview going up last month. I’ve gotten over eagerly anticipating each new issue to accepting that it, in one way or another, it will soon be over. And I’m fine with that. Most expectations had Hawkeye lasting under ten issues and originally I had no interest in checking out the book as I had long since soured on Matt Fraction as a writer by the time the series debuted. But persuasion and curiosity got the best of me, and I’m glad it did because Hawkeye would turn out to be the best and most influential superhero comic of the last five years, setting a new bench mark and helping shift the landscape of Marvel & DC comics for the better. It showed a new spin on an old character that was refreshing, modern and universal by focusing squarely on the humanism of its protagonist. Hawkeye was the most extraordinary ordinary comic of its time and it achieved that with a simple elegance that was singular to its creators and the nation of fans who fell in love with the book. The concept of Hawkeye as this sort of humorous everyday superhero narrative had already been successful with recent Marvel books like Daredevil  or Wolverine & The X-Men at the time of its release. If you read the tea leaves you could probably see it exceeding expectations based on the success of those books or similar comics in tone like Saga, but even so at that time Hawkeye was going against the grain. It came out facing a climate where Marvel was putting everything it had into its events and crossovers, while DC Comic’s New 52 line had developed into a monotonous one-note 90s rehash within a year of its launch. Superhero comics were stagnant and there wasn’t any clear sign that things were going to get better. While the basics of Hawkeye certainly had some precedent, it immediately stood out in 2012 with its unique voice and quality almost immediately. Writer Matt Fraction had been coming off a career low-point with the less than well-received Fear Itself, an unpopular Thor run, the short lived Defenders and a long turn on Iron Man that started out with an Eisner win but had turned redundant. I know I wasn’t interested in the book whatsoever as it took my brother-in-law sending me texts with pictures of the interior pages to pick it up, but once I read the first issue it was readily apparent that Fraction and former Iron Fist partner David Aja had something really special on their hands.

A while back I wrote that Hawkeye felt like a modern analogue of Miller’s Daredevil in its updated re-imagination of the character, but there’s one key difference that sets them apart stylistically. In Miller’s Daredevil, the creator was living it real time in a crime ridden New York City of the late 1970s/early 1980s as he was just starting in comics. By the time we see Fraction on Hawkeye, the writer has already been to the top of the mountain and was looking downward. He had written X-Men, Iron Man, Thor and a couple of event books. At that point, Matt Fraction doing a superhero comic had already felt fully realized and explored. What Fraction hadn’t done much, to many readers dismay, was transcend his superhero work with his natural gifts as a comic writer. Instead he was a writer for Marvel comics with a full family, a large back catalogue and not much in the way of that classic Marvel book we were all waiting for. The modern everyman in a big city parallel between Fraction’s Hawkeye & Miller’s Daredevil comes with a huge gap in age and experience but ultimately works in the book’s favor. Fraction & Aja are creating Hawkeye as Hawkguy, a late 20s bro who lives in Brooklyn, drinks lots of coffee, rescues a dog, has trouble with woman and is kind of awkward with his partner Kate, 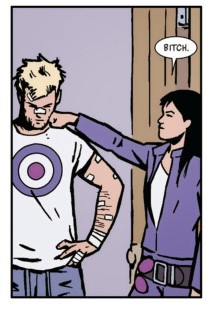 the younger female version of himself with similar issues, but is also a little bit smarter and realistic about them. The antagonist is half eastern European mafia goons and half Clint Barton himself. Because this is Fraction looking backwards, he is able to approach it with a level of wisdom and honesty that would be more difficult had it been done in the moment. Anybody who’s bummed around a big city in his twenties can relate to the Hawkguy persona because Fraction is approaching feelings that are universal at that stage of life. That’s a feeling of fighting the world and yourself in equal measure while just trying to enjoy life and learning what “the right thing” actually is. It’s life as a work in progress, and it’s easily Fraction’s most personal Marvel writing due to the experiences he lived through and grew out of. Hawkeye was Fraction trying to figure out the navigation from young to grown ass man, and while it doesn’t have an answer, it does have a reflection and for readers like myself that was everything.

If writer Matt Fraction gave Hawkeye its voice, artist David Aja gave the title its style with his art setting the tone for the comic going forward as he brought an innovative design theory to the series aided by his fantastic illustration technique. From the first issue of the book, Aja set a precedent for the title’s visual aesthetic, and then kept leveling up on that going forward. The Lucky and deaf issues were his shinning achievements in the way he used the design of his panel layouts to innovate his visual storytelling, but each of his contributions had Aja doing some of the best work of his career. That transcended to guest and co-artist like Annie Wu, Francesco Francavilla, Javier Pudilo, Steve Lieber, Chris Espolioussa and Jesse Ham, all who contributed fantastic interior work on the title in the spirit of the style established by Aja. And the best part about all of this is that Fraction, Aja & co’s unorthodox style, the natural obstacles the title faced, the fearless creativity and voice brought to the title; the best part of all that was that it actually worked. It worked better than anybody could have expected. It was more than a successful title about a b-list character: it changed comics for the better.

hurricaine Sandy while merchandise related to the title was used towards anti-violence & hearing disabled based charities. One issue was told from the perspective of a dog. Another was told from the perspective of someone with a hearing disability because a mother asked them to do it for her son. It went completely against  the grain of superhero comics and the tide shifted towards it. It gave one of comics best writers a second life and it helped make superhero comics daring and fun again. If it wasn’t the best superhero comic of the last five years, it is without a doubt the most important and it achieved all that by making a dormant intellectual property feel human and relatable. The Hawkeye comic is over, but its legacy is still being felt and that’s never going away. Hawkguy is forever.