Cracking the Kindt Case: Mind MGMT Volume One: The Manager

Mind MGMT. What can I say? A book about messing with minds, designed to mess with minds. Matt Kindt comes up with some of the most interesting, mind expanding stories. Or does he? Do I actually like his writing or am I being manipulated by something else between the pages? Have I read it before? How many times? Does Mind MGMT even exist on my shelf? Do I even have a shelf? Could I ask questions like this until you stop reading? Of course but then your day will remain unchanged, aside from the 20 seconds you just wasted reading this intro. For better or for worse the course of your day will change after reading this article so perhaps you should take a chance on the day and continue reading.

In my quest to “Crack the Kindt Case” Mind MGMT was next on the chopping block. To provide a very brief overview the story is about a crime fiction writer Meru who is set out to chase a story about a mysterious flight where every passenger on board lost their memory and two years later are still yet to recover. She is in search of the only man who boarded the plane but was not recorded as getting off it. That man being Henry Lyme. Henry works for an agency called Mind Management who specialize in the development of mind control. The extent of the mind control varies. Agents specialize in different fields such as persuasion, affection, distraction, mind reading and even self healing. Henry is Mind Management’s top and most dangerous agent, and it appears he has gone rogue. Henry is leaving breadcrumbs for Meru to follow to find him. Just as Henry leaves Meru breadcrumbs, I believe Kindt has also left me breadcrumbs to cracking the Kindt case.

When following breadcrumbs there is only one place to start, with the first morsel. I think the first breadcrumb Kindt has left is the Amnesia Fight, Flight 815 to be exact. This is the same name as the Flight that crashes in the popular TV show Lost. Sounds like a legitimate clue right? Well, lets flip back a few more pages and go ahead and close that front cover. The first clue is in the same vein but can be found on the cover itself, “Forward By Damon Lindelof“. Is it a coincidence that the Amnesia Flight in Mind MGMT has the same flight number as the Oceanic flight from Sydney to Los Angeles and the forward is by the very man that created this TV show? I am going to go with not a coincidence, final answer. So then what is the connection? One might say that Matt Kindt is probably just a fan of Lost and is paying homage to the show. One might say that…but TheOneWhoKnocks would never say such a thing. When it comes to Matt Kindt, I have learned my lesson: everything in his books is in there for a reason. If you have not watched all of Lost and were planning on binge watching it sometime soon, then you might want to avoid the next paragraph as I rack my brain to find a connection between Lost, Mind MGMT and of course the glue that binds them altogether, the Revolver character P.K. Verve. 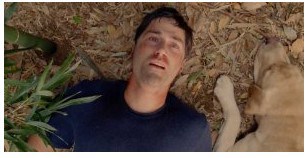 Let’s begin the Lost comparison with the main character Jack. The series opens on Jack lying in a jungle and opening his eyes. His plane had just crash landed on an island. The series poetically closes on Jack lying in the jungle and slowly closing his eyes as he watches a plane fly off the island saving his friends. If you played the whole series on a loop, Jack would wake up in that same jungle and it would all start over again. This is paralleled in Meru’s life. She wakes up one morning knowing she wants to write a book about the Amnesia Flight. She follows leads and finds Henry Lyme. She figures out her story, eventually finds her way back home. After completing all this the cycle starts over. She forgets everything she has done and begins her search for Henry Lyme again, unaware that she has done it many times before. Now throw this idea into our Cracking the Kindt Case theory. Not only do we have alternate universes but we also have stories being told that potentially are not the first run through. Think of Revolver. Sam wakes up and the world is in shambles. We get thrown right into the middle of it. We have no idea if this is the first time this has happened to Sam. He claims that because he hit his head earlier that’s why it started happening. But Verve has been travelling back and forth for years, so why did Sam just start travelling back and forth now? I think Mind MGMT just shone some light on this one. Yes, Sam hit his head and then the travelling between worlds started, but they didn’t start because Sam hit his head, he just forgot that it had been happening before hitting his head. Similar to Meru, perhaps this has been happening to Sam for several years now. This is yet another layer for the Kindt universe. The stories we read might not just be in alternate worlds from each other but might also be on time loops. Mind (wait for it) MANAGED! 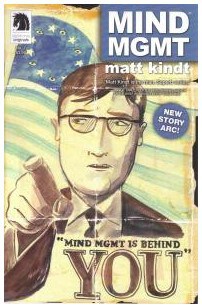 Now I uncovered one other thing from reading Mind MGMT Vol 1. Both Revolver and Mind MGMT have writing in the trim of the pages. In Revolver it is a news ticker that incorporates the page number you are on. In Mind MGMT it is excerpts from the Mind MGMT field guide. Pretty cool stuff. Usually the excerpt from the field guide had something to do with what was happening on the page. If there was a chase going on the excerpt would be about what to do while getting chased. Cool stuff for sure…but that is not it. On field guide number 4.17, things get interesting. The secret messages begin. Just a few words are bolded and this carries on for two issues of the comic. When you put all the bolded words together here is what you get and it is yet another huge clue to the Kindt universe.

Are you there? If you can read this then it’s not too late. Keep paying attention. Nothing is what it seems. You aren’t the first. This isn’t the only time. You have to get out now before they do it again. If you haven’t done it yet, it might already be too late. Take Bill and get out. You need to snap out of it. How many times has it been? I’m running out of ways to communicate. But I think this time it will work. Just focus on the Talisman. You won’t remember right away but eventually you will. Know that you have been here before. You don’t need to be afraid. It gets easier every time. You’re wondering who I am but if I tell you now you won’t believe. I’ve tried it that way before too. You need to come to the realization on your own. But know that you aren’t, you aren’t on your own. There is you and more of you.

Alright two things. First I have no idea what the Talisman is in this story. A Talisman is like a “good luck” charm, I think. This is also a connection with Lost as that show is heavily based on the science vs faith concept. Jack the main character who is the man of science makes a decision at the end of the show completely based on faith to save his friends and possibly the world. Very powerful moment. I think the Talisman is going to create this science vs faith battle in Mind MGMT. However the real heavyhitter in this field guide message is the last sentence. “There is you and more of you.” This hammers home the fact that all these characters and all of Kindt’s stories can coexist. There are multiple Meru’s, just as there are multiple Verve’s, and multiple Sam’s. So again my question arises. Which character are we reading? What are the other characters doing in this world? Perhaps the job of Mind Management is to make sure people don’t realize that they could travel between worlds. Terrific stuff! Thanks Matt!

Mind MGMT is a fantastic story jam packed with head scratching and mind blowing moments. When I read Mind MGMT I definitely need a pad of paper beside me in case I forget what happened last page. Stay tuned next week for Mind MGMT Volume 2. I will warn you I have already read it and there is a clue in Mind MGMT volume 2 that bust this Kindt Case wide open. It’s a doozy, it’s a game changer. Or is it? I can’t remember…