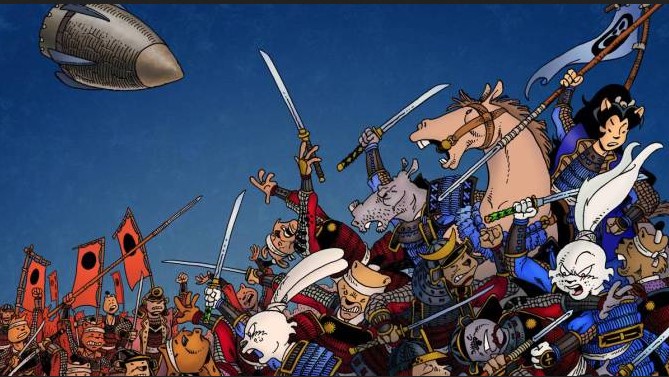 It’s war of the worlds with samurai. Do I really need to say more? Go buy it. Yesterday. It’s a fantastic six issue series set twenty years in the future of Usagi Yojimbo, a comic about a samurai rabbit who wanders the Japanese countryside. That’s literally all you need to know going in. The main character, Usagi, the bounty hunter Gennosuke, and Usagi’s son, Jotaro, have become high ranking members of the Geishu clan. They’re waging the deciding battle in the war against Lord Hikiji when a giant, mysterious object falls from the sky. From then on, it’s war: samurai versus aliens and it is glorious. Each issue is action packed and chaotic, with fantastic artwork. Stan Sakai is the master of the action sequence and mixing loud battle scenes with quiet character moments. In the twenty years between this series and the main, a lot has obviously happened.

My favorite moments are not the samurai fighting the aliens’ tripods but instead the quiet character moments. There’s a lot of history between them, and it’s made obvious from page one, but it’s a testament to Mr. Sakai’s writing that he can keep a story new reader friendly while also making the character moments meaningful for both old and new fans. Look no further than Usagi and Tomoe. These two have been teased as a couple almost from the start, but in the twenty years, Tomoe was in an arranged political marriage with high ranking member of another clan. I lover their conversations of what might have been, and after the death of her husband, the future. They bicker a lot more often than before, but it’s still obvious that they love each other. It takes the characters to a place that they hadn’t really gone before, and I like it. 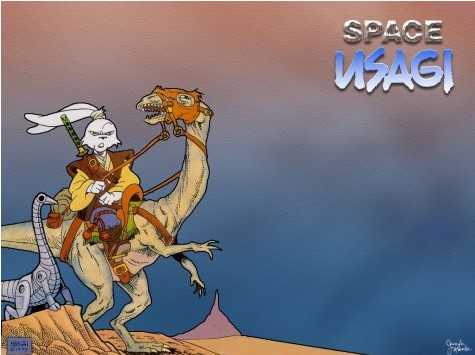 Another bit of brilliance of Senso is how it fits into Space Usagi, another series set in the same universe. Without giving too much away, the ending of Senso ties into this series, and fits perfectly. For those who haven’t read the awesome Space Usagi, the main plot is a space opera where the descendants of Usagi still live by the samurai code. Usagi Yojimbo takes place during the time period where Japan closed itself off to trade so one would expect that in the future the United States would eventually force Japan to open its doors to trade and later westernize. So what changed? The alien invasion. By the end of the series, they have the aliens’ technology, and the protagonists adapt it so that they can explore space, thus creating the world of Space Usagi. That’s just my personal theory, but wouldn’t that be cool?

I don’t want to give too much away, because Senso has some really

shocking and heartrending moment better experienced for yourself, but I highly recommend it to both new and old readers. The artwork is beautiful, the story epic, and it’s just fascinating to see where the characters will be in twenty years. Go check it out. You will not be disappointed.