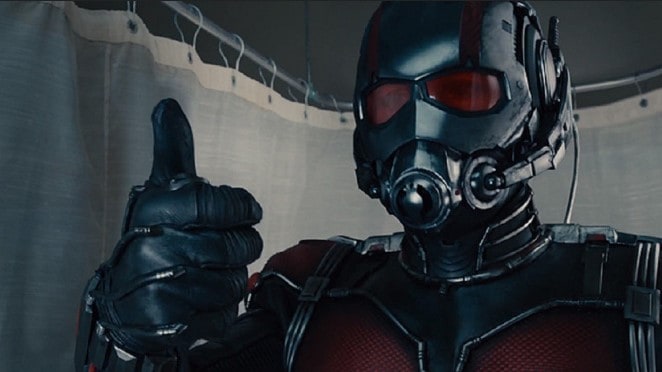 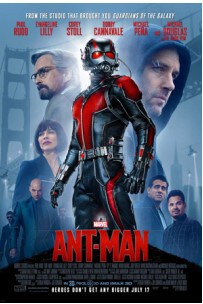 With the arrival of Ant-Man, Marvel Studios continues to expand the scope of their Cinematic Universe. Following in the footsteps of last year’s exercises in espionage/conspiracy thriller (Winter Soldier) and science-fiction adventure (Guardians of the Galaxy), the studio adds heist comedy to their repertoire. Like those previous movies, Ant-Man successfully manages to blend its style with the MCU’s larger framework, while still offering audiences something a little different. It might not reach the same heights of Winter Soldier/Guardians (which admittedly set the bar pretty high), but it is an entertaining two hours.

Beyond tone, however, the film also broadens the MCU by reaching into its past. This is not the first time that Marvel has done this, though, it has been largely limited to the Captain America family and the period of/immediately after World War II. Ant-Man is concerned with the more recent event, which build a link between the 1940s and the present. Indeed, Ant-Man’s very first scene is a flashback. The year is 1989 and Hank Pym is furious with the heads of SHIELD. It would seem that they have been trying to recreate his Pym Particle formula without his permission. This leads to a confrontation between Howard Stark (John Slattery in full-tilt Roger Sterling mode), Peggy Carter (Hayley Atwell proving once again to be one of Marvel’s best casting calls) and an unfamiliar third party (Martin Donovan, a long way from 90s indie films). Not trusting Stark, the government or really anyone with his discovery, he resigns from the agency.

From there the film settles into the present and its main protagonist Scott Lang. Lang is freshly out of prison, after having committed a robbery (sorry, burglary) with activist undertones. Good intentions of helping others only gets a fellow so far though, as shown in one scene where his past actions are praised/cited for firing him in the same breath. The fact that Lang is being laid off from an actual ice-cream chain is probably one of the oddest uses of corporate sponsorship in recent memory. (Folks it is safe to bring your children to Baskin Robbins; we would never give a reformed felon a second-chance by gainfully-employing them). Regardless, Lang is without an income, which makes him unable to meet child support for his young daughter Cassie which in turn makes interacting with his ex-wife Maggie and her new partner Paxton (a cop no less) a bit awkward.

Thus, reluctantly, Lang lets his old friend Luis talk him into joining a new crew for another heist. Only this one leads him to Pym and the Ant-Man suit. Pym has spent all the years since leaving SHIELD burying his shrinking technology so that it would never be abused. Now his former protégé Darren Cross is very close to not only replicating it, but also militarizing it for the highest bidder. Cross labels his breakthrough Yellowjacket. (One of the advantages of the comic book Pym’s long history of identity crises is that it leaves creators with a different name for pretty much every facet of the character’s legacy). Together with his daughter Hope van Dyne, Pym has a plan for dealing with Cross, but he needs Lang’s help. At least he thinks that he does; Hope is a lot less confident about the ex-thief’s value.

From here the film builds-up to an elaborate heist of the Yellowjacket prototype. Director Peyton Reed, drawing on a screenplay that (in)famously went through copious revising (Edgar Wright, Joe Cornish, Adam McKay and Paul Rudd all receive final credit), does a good job balancing potentially contradictory tones. Even the most solemn Marvel outings like Winter Soldier have found room for quips, yet, even more so than Guardians of the Galaxy, this is the MCU film that feels most like a straight-up comedy at times. (My colleague Patrick compared the early stretches to a Judd Apatow project). Many of the funniest moments are provided by Michael Pena’s Luis, especially the pair of brilliantly rendered “see I knew this guy, who . . .” sequences. 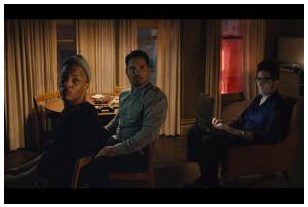 At the same time, none of this humor clashes with the more somber themes of second chances and father/daughter relationships. The serious moments do not feel tacked on, but naturally part of the larger story. The same is true of the action sequences which flow smoothly. Unlike Age of Ultron, the CGI is more restrained here, resulting in less image blurring. Most impressive is that none of the fast-paced shrinking/enlarging fights lose any resolution. Overall, the effects have a polished, yet lived-in look, such as the dingy bathroom where Lang uses the Ant-Man suit for the first time. This creates a visual demeanor which matches the film’s hero. The creative team clearly had fun with the concept devising several funny visual gags based on size variations.

Paul Rudd does a good job playing Lang as a decent guy who only wants to get his life back on track. He has a sense of commitment not just to Cassie but to larger causes (as in one scene where he refuses to abort a mission for Pym even after coming face-to-face with unexpected opposition). Rudd’s performance is quite likable.

As alluded to above, the Hank Pym of the comics has had a long, complicated history. Bringing the character to screen was always going to involve tricky choices about what elements are or are not essential. The writers of the film have found a good middle ground. They refashion chunks of Pym’s backstory while still folding in many of his long-standing traits. The movie’s Pym is a brilliant scientist who feels guilt about his deceased wife, has a troubled relationship with his daughter and protégé Cross (“the son I never had”). The Pym Particles themselves serve as a substitute for A.I. research (since Tony Stark invented Ultron for the MCU), allowing Pym to confront the unintended consequences of his scientific explorations. Indeed, Cross’ video pitch for a planet made safe by Yellowjacket tech ends with an image reminiscent of Stark’s dream of an Ultron wall around the world. Michael Douglas, expertly juggles these various layers, while still presenting Pym as sympathetic character. His flaws are there, but so is his desire for setting things right. As played by Douglas, he is one of the highlights of the movie.

Aside from the already mentioned Pena, the rest of the cast is good, if not outstanding. Evangeline Lilly does a fine job with Hope, even if the role seems a little rote at times. Still, she brings a good personality to it, and I would be happy to see more of her in the future. David Dastmalchian and T.I. get some good laughs in as the supporting members of Luis’ crew. Bobby Cannavale does what he can with Paxton, though it is a mostly underwritten role. Judy Greer, meanwhile, is flat-out wasted as Maggie. How do you cast Greer in a comedy then somehow not give her at least one zinger?

As for credit teasers, there are two of them. The mid-credits reveal is not a shocker, but is a nice confirmation of what many fans hoped would happen next. The end credits scene though is a bit more unexpected. As teased pre-release it points ahead to next year’s Civil War, making an intriguing suggestion at what one source of disunion might be. On a related note, the concept of “quantum space” plays in important part in Ant-Man’s narrative. “Quantum space” immediately brings to mind a certain Sorcerer Supreme set to make his own Cinematic debut in 2016. I suspect that viewers will be revisiting this plain of reality again. Overall, Ant-Man smoothly integrates himself into the larger MCU. 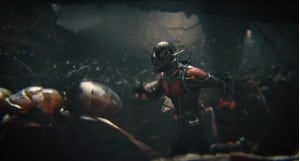 This was an enjoyable film. While it does not have the same ambitious storytelling or grand scale of Age of Ultron, it also lacks some of Ultron’s flaws (i.e. over-stuffed narrative, poor CGI). In some ways, it is the more satisfying film. It gives audiences a different spin on Marvel’s established formula, a fresh flavor to their Cinematic Universe. After all, audiences appreciate variety, something more than the same monochromic treatments.

Or, more simply, sometimes it pays to think small.