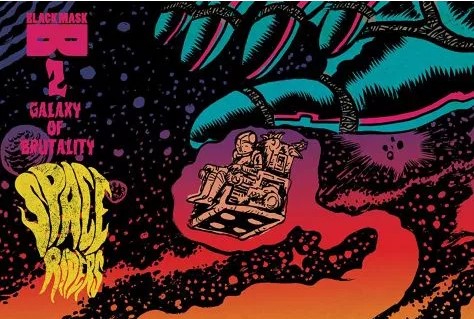 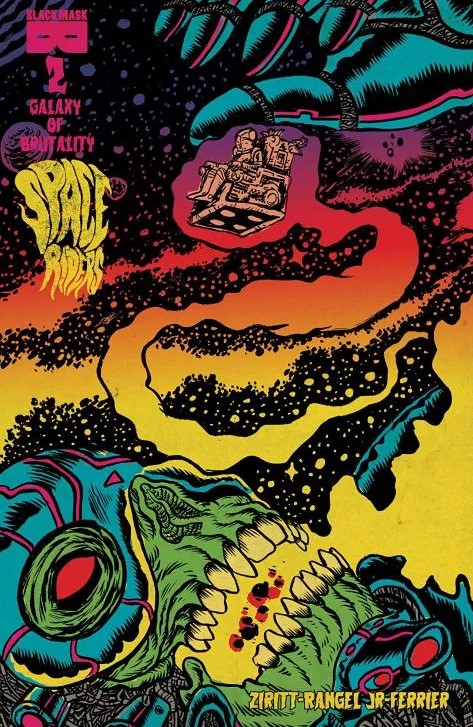 Captain Peligro reconnects with his crew, and long lost mother. Meanwhile, an evil space god and his minion are about to seize control of Space Riders HQ…

Space Riders has always been a series of stellar art, while the plot took a backseat to the visuals. Not to say it was pointless, but with this latest chapter, the two are now on more equal footing.

The book reads like a homage to The Fifth Element, The Hitchhiker’s Guide to the Galaxy, and Green Lantern, as Captain Peligro moves from one crazy situation to the next like a Clint Eastwood character. Despite the outlandish plot and its devices, its very easy to follow. While it may wear its inspirations on its sleeve, its pretty awesome seeing giant space squids and aliens dressed in biker space armor.

I can’t say enough about Ziritt’s art, as it really is unlike any other style you see in comics now. It’s like the album art you saw on 70’s covers, bright and glaring, its subject matter seizing your eyes. On reflection, Ziritt’s style is like a spiritual continuation of Jack Kirby and Jim Steranko’s work in the 60’s. The bold body shapes, the sublime color combinations, and the geometric technology, it all was prominent in the heyday of comics and its mostly vanished in modern times.

I’m always excited to see what Ziritt’s pen puts on the page next, as it seems literally nothing is off limits. The Omega Structure is a prime example of this, a huge wall in the Universe that is also a giant tomb for celestial beings but with 80’s punk aesthetics.

Its hard to believe that Space Riders could get any better, but Rangal Jr and Ziritt have outdone themselves with this issue. It encompasses what makes comics great, as well as reminds the reader of favorite touchstones in science fiction. Now more then ever, I can’t wait for the next issue. 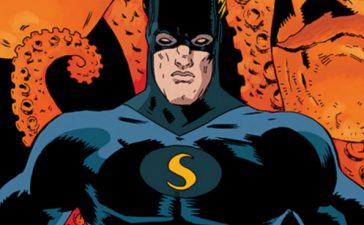