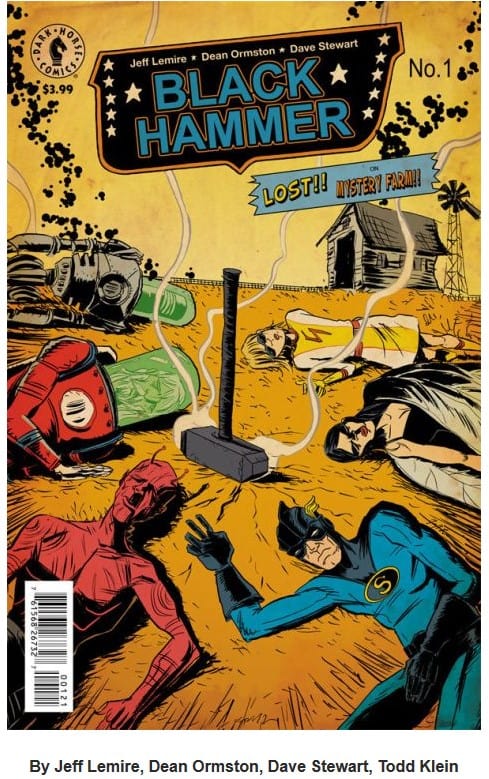 Jeff Lemire’s long awaited Darkhorse comic, Black Hammer, finally sees release this week.  Much like his other post-DC work, it contains an energy and freshness that has reminded readers why he is such a big name in comics.

When it was first announced, a flurry of names was thrown around including of all things Watchmen.  Any creator seeking to connect their work to a watermark like Watchmen is surely setting the bar high, or inviting a barrage of criticism for being so daring. To its credit, Black Hammer is almost nothing like Watchmen but if someone were so inclined they could see a tangential connection in inspiration. Indeed, Black Hammer is fairly shameless in showing off the works that Lemire is basing the book on by way of homage but also instantly connecting readers with well-known archetypes.

Instead of being cheap, it’s actually smart and economical of creators to tweak classic characters to make them their own. Everyone knows Superman, but instead of going out of your way to show why character X isn’t like Superman, it makes more sense to let the reader make the connection that “yes, this character is like Superman but also not”. The character may seem like a poor imitation, but knowing off the bat what this character is supposed to be allows the writer to quickly differentiate these new characters.

Perfect example, the inside cover of Black Hammer #1 has a logo clearly based on the original Justice League of America logo. This let me know, “ok these characters are like the Justice League” which very quickly helped me deduce why there was a martian, robot, and dimension hopping spaceman in the cast.

Wildly diverse cast aside, the story of the issue is more of a slow tease. These characters have been living at this farmhouse for 10 years, sort of uncomfortably yet like a normal family they argue and bicker while some just plain don’t want to be there anymore. Abe Slam, a former crime fighter posing as an aged farmer actually enjoys his new quiet life except for his eccentric houseguests. At this point, they’re all pretty honest with each other in who they dislike and who they don’t mind being around which gives the issue some dark comedic moments. 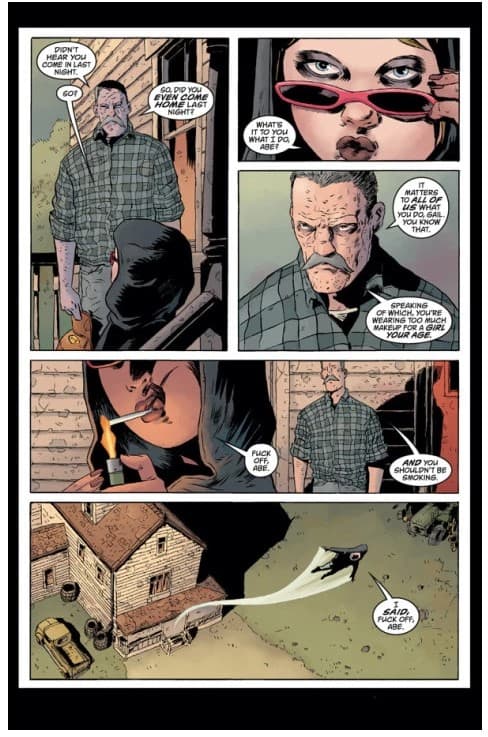 Why they’re stuck there or what they’re trying to escape from is a mystery, but it’s connected to the Black Hammer, whose wielder sacrificed himself to save his team-mates. In a distant, sprawling city, a reporter is documenting the 10 year anniversary of the citiy’s famous heroes who vanished saving it. 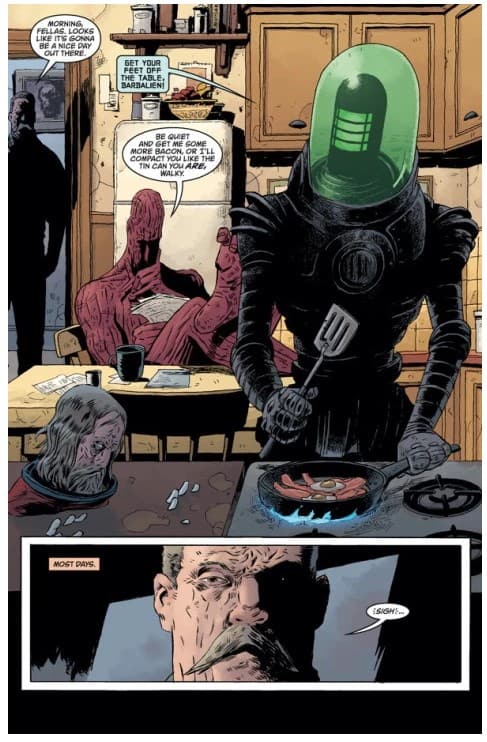 The art by Ormston actually looks a bit like Lemire’s illustration style early in the issue before transitioning to a pulpy, iconic look that reminds me a lot of Mike Mignola. The overall figures don’t have much detail but Ormston tends to give each face a lot of lines around their eyes and nose to convey depth and age. It’s very different because that puts all this focus on their faces since there’s twice as much detail there then on their clothes or background scenery. It works for the weird, mysterious tone that Lemire establishes and also humanizes the characters somewhat. Visually the issue looks very much like a 1960s comic with bulky robots and glowing mechanical orbs, played against a rural setting on a farm. The contrast works because it plays up these elements that don’t belong together and shows that (most of ) these characters don’t belong there.

Tonally, the issue feels more like a cross between DC’s  Starman and Image’s  Invincible which is a strange pairing. It evokes all this past history, not the least of which old superheroic adventures, but framed in a post-modern context. Golden Gale feels very much like a character in Invincible but that’s not the only aspect that forms that connection, it’s also the casual way these strange characters just exist side by side and the way Lemire plays with well-established archetypes from the Big Two.

Black Hammer #1 seems very different from anything else the creator has done recently, but like his current writing on Moon Knight; he appears to be going for a wry, supernatural mystery story set in a superhero book. Although not much happens in this issue, it sets up a lot of questions about where it goes from here.  For fans of Jeff Lemire and offbeat capes and tights comics this is definitely worth checking out.