You should be watching One-Punch, Man 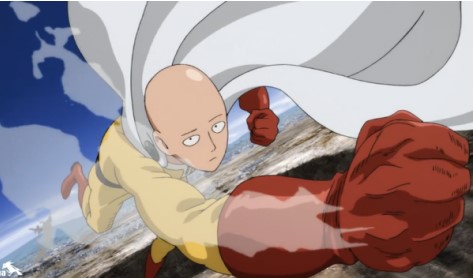 The next step up for the superhero genre is here and its not in the form of a blockbuster movie, a comic from the big two or even from the Western Hemisphere.

The newest anime on the Toonami block, One-Punch Man, is required viewing for any fan of the superhero genre.

Imagine if Robert Kirkman took Superman, put him inside his comic Invincible, but then wrote it like Deadpool. That is the awesomeness of One-Punch Man, a series that satirizes superheroes and their cliche tropes but also manages to be a great story of what it means to be a hero.

Created by the man who operates under the pseudonym One as a web-comic in 2009, his series exploded in popularity and one of the top manga publishers in Japan approached him to serialize his stories. The comics were redrawn by Yusuke Murata, another manga artist who has been published by Weekly Shonen Jump, the same publisher who brought One-Punch Man to a wider audience and ultimately helped to make it a anime.

Set in a world where superheroes of all shapes and powers exist alongside crazy scientists and giant monsters, these things have become common place. Saitama was a normal guy who after failing to land an actual job, decided to pursue his childhood dream of being a hero. After training for three years and going bald, he becomes so strong he can defeat any opponent with one punch. Punch. BAM! Done. No kryptonite, magic or special light matters; if he punches someone they get annihilated. With this incredible power, he has become bored with fighting since he can win so easily.

In spite of this,  he continues to act as a superhero out of the hope he can find a challenging opponent which becomes increasingly unlikely. His reflexes are faster than the fastest hero on the planet, his body is pretty much impervious to pain or injury and even without punching someone he’s still freakishly strong.

The secret to his unbelievable power? Resistance training: 100 push-ups, sit-ups, and squats every day with a 10 kilometer run, three meals a day with no heating or AC ever to build mental fortitude. The only downside to all that is Saitama went completely bald overnight.

Saitama goes about his business until he meets an overeager cyborg named Genos, who has this long and dramatic origin that Saitama insists be condensed to 20 words or less. Basically, Genos is hunting for another cyborg that destroyed his hometown and family but needs to become stronger for the day he does. He begs Saitama to take him on as a disciple, which he absently agrees to until he realizes Genos is serious. Genos follows him around every day hoping to learn the ultimate secret of Saitama’s power, because he doesn’t believe a normal human could achieve it by basic resistance training. At first Saitama is annoyed by Genos constant presence, but tolerates him out of loneliness or because Genos helps pay rent when he moves into Saitama’s apartment.

There’s six episodes of the anime that have aired in the US so far and as yet, I can’t determine any deep meaning behind it. Maybe its a journey of Saitama looking for purpose or a sense of achievement for his efforts, but I do think I can point to a possible moral behind each episode.

Episode One: Saitama’s backstory, and his current dilemma that his life lacks meaning with his unbeatable power.

Episode Three: The pair use their combined capabilities and prove themselves as heroes.

Episode Four: Saitama learns about his lack of recognition for all the good he’s done and vows to change it.

Episode Five: Saitama and Genos sign up for the hero registration, with the former getting an average ranking for his lack of dedication at being a hero.

Episode Six: Saitama actually has to try at being a hero, since his low ranking will be revoked if he doesn’t perform any heroic deeds at least once a week.

There’s much more fun and story development in each episode, but those are the barest broad strokes. There’s a healthy amount of humor ingrained in the show as well, from Saitama’s causal observations on his opponents (the giant naked guy should put on pants) and his annoyance when people remark on his baldness, to how ridiculous every villain’s motivations are.

One-Punch Man is an incredibly well done anime and take on superheroes. I’ll be immensely surprised if it doesn’t become as revered as Dragon Ball Z or Gurren Lagann. In only six years, One’s work has gotten published by Weekly Shonen Jump and become an anime. For comparison, that’s like if the Tick was turned into a blockbuster movie 2 years after he was created.