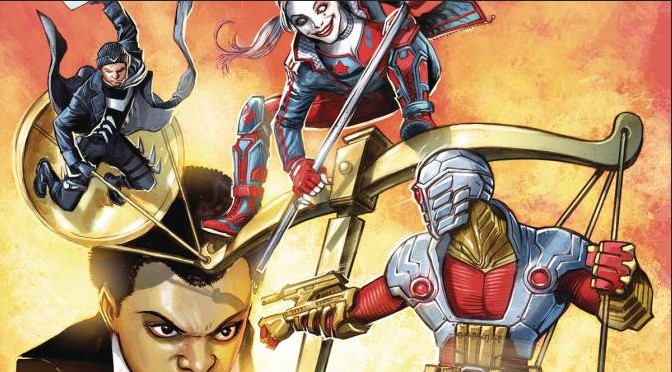 John Ostrander returns to the title he made famous in the 1980s, delivering the book we needed and deserved for Task Force X…

I’ve written so much about Suicide Squad over the last couple of months, it’s crazy. I was actually enjoying it until I saw the movie, then things went downhill. Neither of DC’s Rebirth issues for the series were all that encouraging, or really what they should’ve been aiming for with all the mainstream coverage. Luckily, someone like Ostrander could come back to show how to do the Squad right and convince us it’s still a cool idea that just needs proper execution. Top to bottom, this single issue could be read as a correction of the live-action movie and the most recent Suicide Squad #1. The plot is very low-key; the Squad has to rescue a U.S. Government official who is confirmed to be a war criminal from a foreign nation without getting caught or having their target killed.

The entire issue is concerned with that premise, not the Squad saving the world or retrieving something vague and/or magical. There’s nothing wrong with taking the team to the heights of absurdity, like Tim Seely did with his brief time on the last volume, but I feel other writers lose control of the plot and characters by going too big. Ostrander’s plot is refreshingly simple but becomes more engaging as he adds in details of the Squad’s mission, like them only having a three minute window to save their target or Captain Boomerang making up Australian slang to sound cool; those details makes the book a delight to read. The script is so thorough it could’ve been q better version of the movie; that’s how well-constructed it is.

The art has a mixture betweeen cartoonish and stylistic realism, which makes the action feel real and the humor accessible in seconds. The capture of Senator Carmody is orchestrated like a big budget thriller, with tense closeups and charged action. Every character’s emotion is visible on their face, along with appropriate body language to sell their personality traits. Every character from Waller to Harley Quinn, looks the part in their posture and expression. My favorite sequence is Deadshot drawing and shooting his handguns while in midair on a motorcycle. It may not sound remarkable, but how its done is simply three panels doing what they need to do without hindering the story or even drawing attention to how impressive Deadshot’s kills are. The art’s subdued approach, like the writing, simply shows its strength by not focusing on fancy visuals. 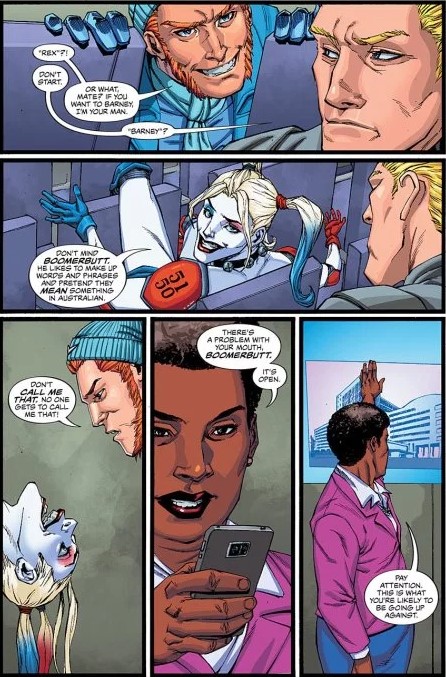 In many ways this feels like a modern interpretation of Ostrander’s first issue of Suicide Squad #1 from 1987, the only change being updated clothing, a change in cast, and a different political undercurrent. Instead of Bush Sr, this issue plainly has his son’s Presidency in mind. Terrorism isn’t the focus, but national security is, even if it costs lives and property damage to save face. It’s an approach thats a good mix between past and present, in that its more concerned about America’s role in global politics instead of what a single politician may have said recently on the news.

The Squad’s mission does go sideways, despite their clever preparations and subterfuge and it feels right for the title. Any mission where everything works out for this group would be poorly thought-out. If I had any gripe, it would be Amanda Waller trusting Boomerang’s word that a teammate was going off-script and punishing them for it. It works because Boomer is a scumbag, and its not called Suicide Squad for nothing, but it felt like too much trust being given to a guy with too few moral qualms about his behavior.

Pat has talked before about how the Squad was about the normalcy of failure and that theme continues here. Despite everything the Squad does, by the end of their mission they come away only with the skin of their teeth and the promise that they’ll be back at it again soon. They jumped through hoops with no reward, except to live again to die another day, and it is so much more fitting than an espresso machine or supervised family visit.

I’m sure there’s more than one way to write the Squad, but Ostrander’s tried and true approach just works so well compared to others who tried to go all out. It makes me sad he won’t be continuing with the characters again anytime soon, as aside from Seely he’s the only one that seemed to nail the concept and the characters recently. If nothing else, Ostrander proves why his revamp of Task Force X worked in the 80’s and works now, the Squad is a cog in a machine that is constantly trying to keep moving and they’re forced to play the game or get run over.

If you want a good book about Suicide Squad to try, or just miss Ostrander’s original take, this issue is perfect for you. I questioned the $4.99 price until I started reading it, and by the end I felt like it was worth every penny.