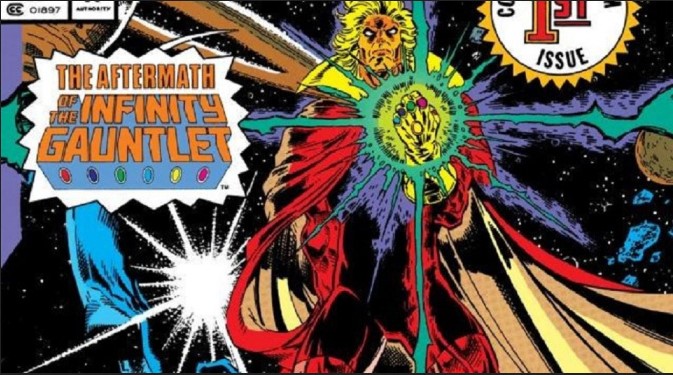 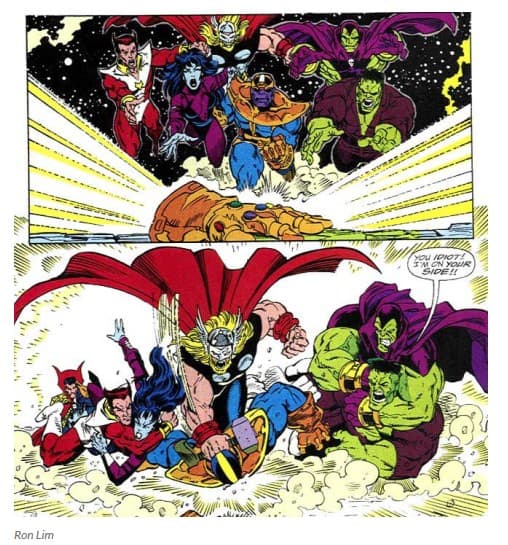 Contains a spoiler for the mid-credits scenes of Guardians of the Galaxy Vol. 2, plus multiple ones for Infinity Gauntlet and its aftermath.

This past weekend Guardians of the Galaxy Vol. 2 arrived, racking up the box office and leaving fans wondering what was next for the Marvel Cinematic Universe’s cosmic heroes. The immediate answer is Avengers: Infinity War which will involve Thanos, Infinity Stones and some sort of existential threat to life throughout the universe. The question is what comes after all that. Guardians writer/director James Gunn has already confirmed that there will be a Guardians Vol. 3 for Phase 4 of the MCU and that he will be returning to helm it. In his statement, he reiterated Marvel Studio’s party line about Avengers 3 and 4 being a culmination of everything which came prior. He also dropped a hint that, like Earth’s Mightiest Heroes, the Guardians will see some status quo shifting post-Infinity: “It will conclude the story of this iteration of the Guardians of the Galaxy, and help catapult both old and new Marvel characters into the next ten years and beyond.” This is a rather broad statement which covers a wide amount of ground. The universe is a vast place and, even with certain character rights tied up at Fox, still well-populated with assorted friends and foes. The following is not in any way a prediction of what Marvel and Gunn are planning but simply an imagining of what one possible avenue could be.

First one huge assumption needs to be made: that Marvel is not doing a faint when it comes to the basic plot of Infinity War. The conflict for Avengers 3 and 4 will be dominated by the Infinity Stones and Thanos. Marvel Studios President Kevin Feige claims the title for Avengers 4 contains a spoiler for Infinity War, yet the other day Zoe Saldana, who plays Gamora, said it would be Infinity Gauntlet which is hardly a surprise for any fan with a basic knowledge of Marvel history. Regardless, an extensively bookmarked copy of the Gauntlet omnibus was recently glimpsed in a Marvel video announcing the start of filming for Infinity War. So, it seems pretty safe to assume this story-line is coming to the screen in some shape or form. Thus one of the essential questions for what the MCU will look like post-Infinity is what happens to those stones after the dust settles in Avengers 4. The simple answer is squirrel them away in Asgard next to that other Gauntlet in the trophy room. A more intriguing route though, would be to continue following the lead of the original 90s saga. 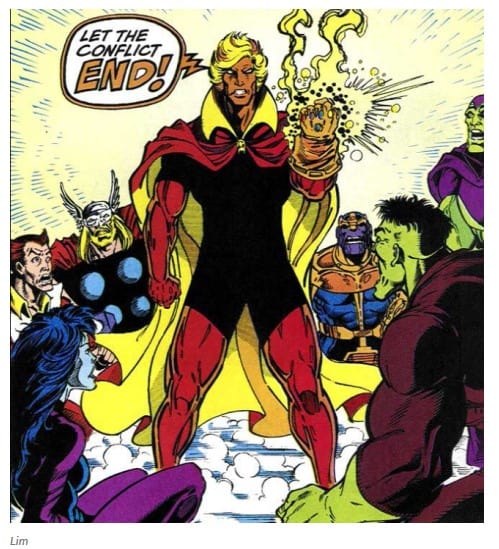 Writer Jim Starlin ends the comic Infinity Gauntlet with Adam Warlock holding the Gauntlet. Warlock’s original intention is to keep supreme power for himself but other cosmic entities have different ideas. Adam Warlock is given a hearing before The Living Tribunal as an opportunity to plead his case for godhood. (Imagine how striking such a sequence could appear on film. One of the best Easter Eggs in Doctor Strange was when Baron Mordo name dropped The Living Tribunal). Eternity argues against Warlock, essentially stating that omnipotence may not be trusted with any individual with as troubling an emotional history as Warlock. What if Adam’s evil mirror self, The Magus, arose once again? Would the universe then be at the mercy of yet another deranged tyrant, one arguably worse that The Mad Titan himself? Eventually The Living Tribunal rules against Warlock and Adam concedes. He volunteers to split up the gems among five trusted individuals of his choosing (the sixth gem, the Soul Gem, remains in his keeping, as he had possessed it in the past). Thus, Warlock goes about assembling the Infinity Watch and Marvel gets a spinoff/sequel title also written by Starlin.

The Watch was entirely made up of cosmic characters and as such, could easily function on screen as a new iteration of the Guardians. Two of the members are already well-established for viewers: Gamora and Drax. A third member, Pip the Troll, is widely rumored to be debuting in Infinity War. When Warlock distributed the gems, the sixth member was kept secret. Eventually this figure would be revealed as Thanos. Such a choice sounds counter-intuitive, especially to newer readers most familiar with the Jason Aaron/Jonathan Hickman version of the character. This current iteration emphasizes his psychotic nature over all else, reducing him to a cosmically empowered Joker. Starlin’s is more nuanced, especially post-Gauntlet. Having thrice gained godhood only to lose it foolishly each time, Thanos hears the message his subconscious is trying to tell him. He grows reflective, more aware of the metaphysical balances required for the universe to function. It is a long subtle process, during which Thanos never entirely abandoned his shifty, scheming personality. To see this play out on screen could be quite interesting and would be vital to having the MCU’s Thanos be more than a generic power-hungry brute. The fact that Marvel hired for Thanos Josh Brolin, an actor with a history of playing characters in over their heads (No Country for Old Men) and/or crippled by their own inner demons (Milk), suggests that they may have this dynamic in mind. 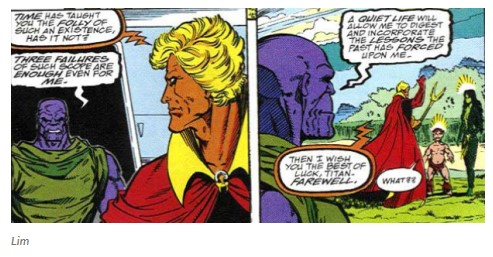 That leaves two stone keepers. In the comics, Warlock gave the Mind Gem to Moondragon. Moondragon is a character with a long history both on Earth with the Avengers and in space with other cosmic figures. In the comics she was also the daughter of Drax (before he was transformed into the Destroyer). The films have been tiptoeing around Drax’s family, painting a vague picture of loss without any details. Are they playing coy in case they wish to introduce Heather at some later date? It is definitely a possibility. (Probably one of the reasons Rachel McAdams’ love interest was brushed aside so unceremoniously in Doctor Strange was to leave the door open for Cleo in future installments). Moondragon would arrive with a bit of baggage from the comic books; many fans have an active dislike for the character. However, the hatred of some fans for Scarlet Witch post-Dissembled did not hamper her big screen debut. With the right writer and actress, the same could be done for Moondragon. Also, it would be greatly helped if she were introduced along with her partner Phyla-Vell. Both characters had a strong presence in the Dan Abnert and Andy Lanning stories, which remain the primary source of inspiration for Gunn’s Guardians. Phyla-Vell’s backstory would require some tinkering though nothing too complicated. Also, adding them would finally open up the MCU to LGBTQ characters. Their relationship was well-developed in the comics and did much for softening Moondragon’s at times harsh personality.

Finally there is Adam Warlock himself, who presents a bit of a logistical quandary. The Sovereign mid-credits sequence in Guardians Vol. 2 stated rather strongly that Warlock will be arriving sooner than later. The question is when. Warlock has a prominent role in Infinity Gauntlet. Though most of what he does could be transferred to other characters, it would not have the same feel. This is where Fox’s grip on several of the cosmic characters, such as Silver Surfer, really hurts. In Gauntlet, Warlock is a Gandalf type figure, strategizing battle plans while also contemplating the nature of reality. There is a mystical other-worldliness to him which suggests deep wells of wisdom. There really are not any pre-established MCU characters that could step into the role. Perhaps Strange, if he was not still learning the ropes himself. The comics’ version of Starhawk could perform that function but the MCU’s, not likely. Getting Warlock right would mean allowing him time to breathe and evolve; it is hard to imagine him stepping straight from cocoon into the midst of Infinity War. Given the current time frame, the best choice would be keeping him off the table until Guardians Vol. 3.

Marvel could still do some version of the Watch if they wanted; the exact same 90s lineup is no more essential than the exact Abnert/Lanning Guardians’ rooster was (still waiting for Bug to join the MCU). For example, Mantis could be easily substituted for Moondragon. Rocket Raccoon with a Space Stone would be interesting. The Soul Stone could be returned to The Vision, its current owner. As always, the key element is getting the core essence of the characters and stories right. The details are up for reappraisal.

As stated in the beginning, this is not an argument that Marvel will film the Infinity Watch, but simply a musing on how that is one choice they could make. The Avengers could simply smash the stones or lose them through some convenient wormhole in the fabric of space-time. Nick Fury could swing by and have them freighted away to whatever government warehouse is storing the Ark of the Covenant. Or Howard the Duck and Cosmo could runoff with them in the end.

The possibilities are, well, infinite.