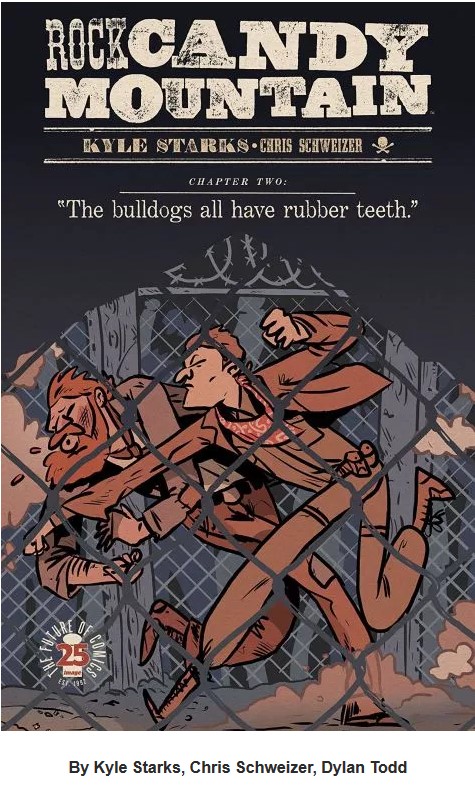 This Week’s Finest goes to one of the most off-beat books to come out this year by far, featuring: hobo fight clubs, the Devil, and government incompetence; Rock Candy Mountain #2…We often put a bias on first issues, as they’re full of promise and the potential to be new and exciting. Which to be fair, a number of them do fulfill those lofty goals (see half a dozen best selling Image series). What is often forgotten is that, “every issue is someone’s first”, meaning there is someone out there who will read issue 500 of Superman as their first issue. Everybody starts a story somewhere, even if it’s not the actual beginning. My first issue of Rock Candy Mountain coincidentally is this one. Such was my excitement that this series was finally out, I didn’t read the cover carefully. Nonetheless, I still found the comic charming and engaging enough to outweigh series I’ve followed from their beggining.

The story involves a hobo badass-fighter named Jackson and a man on the run named Pomona. They’re fleeing the FBI and entering an illegal hobo fight club. The title of the comic comes from the song “Big Rock Candy Mountains” by Harry McClintock, but it also refers to a Shangri La for vagrants where they won’t suffer the hardships they’re experiencing now. Jackson is convinced the place exists, and his ultimate goal is getting there. Pomona it seems is just along for the ride, and is dumbfounded by hobo culture.

I know Kyle Starks from his strong run on Oni Press’ Rick and Morty tie-in comic (which won him TWF on a previous occasion) and so when I heard he was creating his own Image series featuring Hobos in the 1920s, I was intrigued. After reading the book itself, I’m sold. It’s very much an Image book, in that it feels like something nobody else would be publishing unless the creator bet everything on it to succeed.

Starks has a gift for off-beat humor, in similar style to Rick and Morty or perhaps even Cartoon Network’s Regular Show. It’s witty and funny in its own special way, without feeling like a copy of something more generic.

The art style used here reminds me strongly of Gilbert Hernandez combined with Micheal Allred. It’s flat, relying less on perspective and more on proportion to convey objects in space. The camera doesn’t seem to follow conventional approaches either, switching between a wide shot of the characters and then a close-up of their face. The style is deceptively simplistic, but that only allows it to be animated in the reader’s head as they follow the panels. 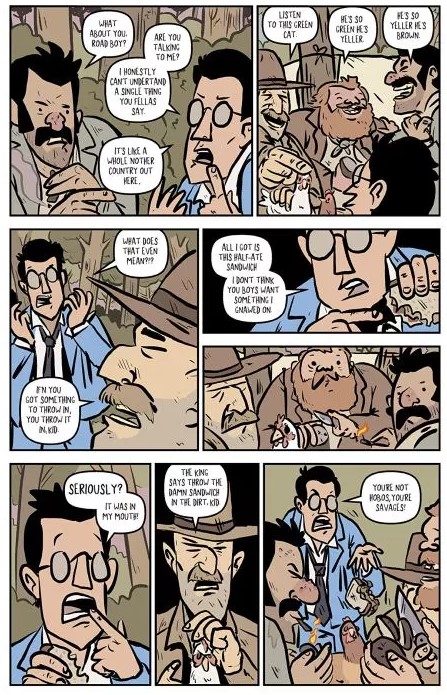 Tonally, this is a farcical comedy of the highest order. Almost nothing is serious, everything is played for laughs, and it honestly works. If Dan Harmon tried adapting O Brother Where Art Thou?, this is probably what we would end up with.

Due to its story sensibilities, the plot itself isn’t really the focus here. I’m just jumping into this series, but even I can tell the point of this issue is the hobo fight club, which is amazing all on its own. It’s the laughs that are important here, and laugh I did at the visual gags and much of the dialogue.

Starks has placed yet another series in my heart, and its fitting that its a comedy. Despite comics being nicknamed “funny books”, there’s very few that would fit that title. In times like this, we need more reasons to laugh. Rock Candy Mountain is unapologetically true to itself and Starks’ brand of comedy writing, and is hopefully destined to be another hit series for Image.

It’s a book that reminds us to hold onto our dreams, and not let the quirky nature of reality slow us down.