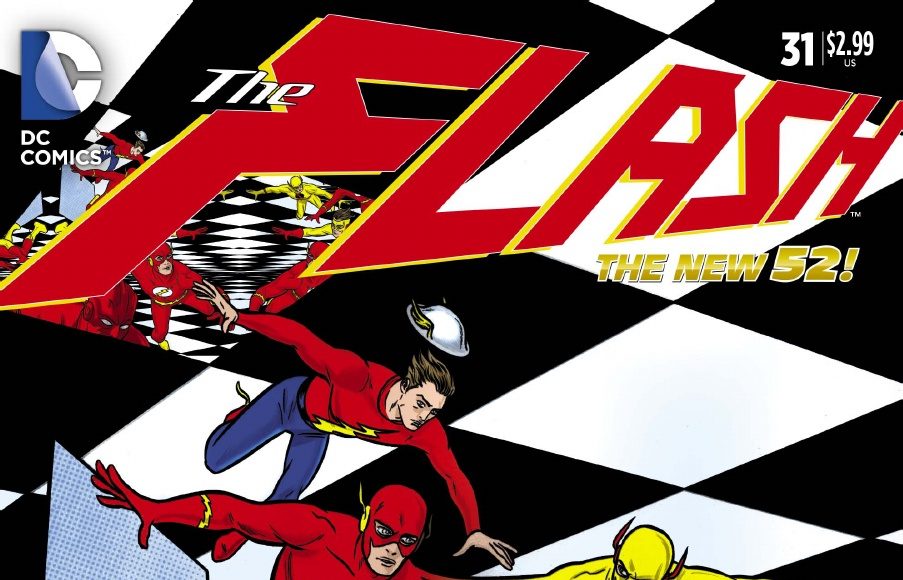 Using the same trick he used on GL, Venditti began his start on this series by teasing an epic threat in the future and then piecing it back to the present.

The story: Barry Allen has failed. Wally West is dead. He has more power than ever, but feels hopeless about using it. He decides to travel back in time to prevent his mistakes and save Wally’s life. First, he is making sure Rogues like Grodd and Mirror Master never plague innocents again.

Future Flash is on his way to the Present, and what will happen is still uncertain. Will he undo his origin? Kill Present Barry? What is for sure is the life expectancy of the Rogues just dropped hard. I could understand taking down Gorilla Grodd, but Mirror Master? There is a reason for that choice, but it’s interesting that in the Future the Rogues never become more ruthless. Also interesting is Future Flash’s attitude. Most heroes seem to toy with quitting every so often, but not Flash. Flash is all about moving forward; what that means is different for each of them. For Future Barry, it’s about running back to the past to make the future better. Even on the precipice, Flash holds onto any thread he can that it’s not hopeless.

The Art: Booth’s art improves here from the previous issue. Flash’s running stances appear much more natural, and his speed movement more consistent. However, almost every character has unusually long legs. Twice what their arm-span is. He does continue to include diversity in the characters drawn so I’ll forgive the odd autonomy choice.

Overall: A solid issue from the new team. Although the opening sequence will feel familiar to GL fans, enough about this issue should feel comfortably inline with expectations to current Flash readers .

PS: Are the writers ever going to address the Flash’s limits on using his speed? Buccellato and Manapul established that if Barry runs too fast it tears open wormholes and has to shed the extra energy to avoid it. I’ll be very curious if Venditti and Jenson will tie the current story into the past team’s.