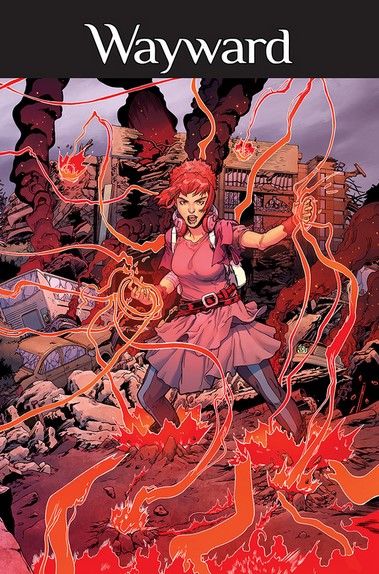 Pre issue #5 I was a fan and supporter of Wayward. Post issue #5 I am a huge fan and recommender of Wayward. Zub and Cummings deliver the strongest issue of the series. I am doing a lot of reading these days to catch up on some series I have fallen behind on. It is nice to read a bunch of issues in a series but it does sometimes get a little difficult to start a pile of comics when you have 5 or 6 to read of the same title. Well in this case it is unfortunate that I am caught up on Wayward because when this issue ended all I wanted to do was reach down and pick up Wayward #6 and keep trucking. I settled for the next best thing. Grabbed my computer to tell all you readers out there how great it is.

Wayward so far has been about a “team” of supernatural teens who all have their own unique powers. I put team in quotes because so far the definition of team has been that they all have something very exceptional in common so they spend most of their time together. Enter issue #5. This is the issue where the team of teens actually becomes a team. Rori, Ayane, Shiari and Nikaido all figure out that being a team means having each others back, and having each others back means that they are never alone. Each one of these characters has been looking out for themselves for so long that when they formed the supernatural team it made no difference to them. Even though each kid was now part of a team they were all still operating under the “me against the world” mentality. This issue is emotionally impactful as each of these teens realizes they have friends who would fight for them and are in turn worth fighting for. It is a wonderful issue.

To go along with this fantastic team building there is one of the best in house brawls so far in the series. Personally I am not a cat person, I don’t know what it is about them but I just feel like they are always thinking about killing me. Anyways what I found out today is that even though I’m not a cat person, I am the kind of person who thoroughly enjoys when a clowder of cats burst through a doorway and turns a terrible situation into a fair fight. The art in this issue is fantastic. The colours of the blue and red fight scene are mesmerizing.

This was really just a fantastic issue all around. The characters found what they are really capable of both physically and emotionally which is the one two punch when it comes to comic books. I can’t wait for more. I was going to write a clever send off like Wayward stays on track, but I can’t do that now because this issue didn’t stay on track, it left the runway and took flight.