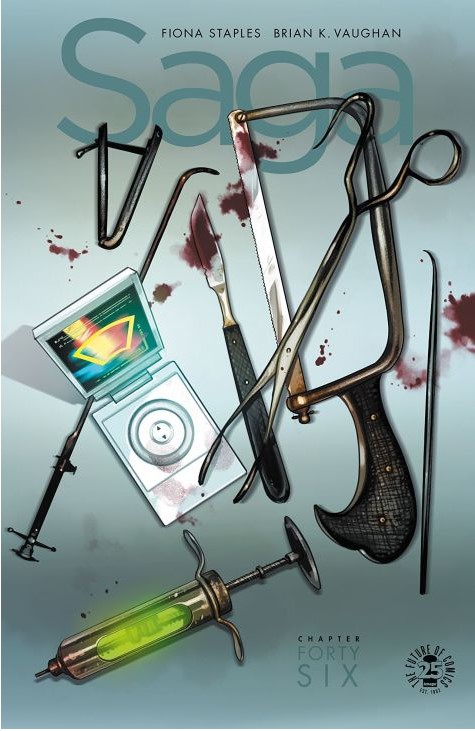 Saga is a comics series that’s known for it’s big moments; the stunning and imaginative scenery, the distinct design sense, the big ideas, the eclectic extended cast of strange and exotic alien humanoids and animorphic counterparts, and the epic story lines. At forty six issues and counting, Saga is a big, beautiful tapestry of war and family wrapped in an enthralling and modernist space opera. But at it’s heart, Saga is a comic that is connected by it’s small moments; the interpersonal connections and emotional resonance that threads together the larger tapestry. Issue #46 is an installment that’s almost entirely made of those later parts, there’s no cool new spaceship, planet or monster, no action scenes, even very little in the way of the books subtle usage of humor. Instead, the issue is broken off into three sections focused on the interactions between two characters. Yet that, three conversations between two separate individuals, encompasses something as beautiful and thrilling as anything Brian K Vaughan & Fiona Staples have ever presented for readers with Saga in its entirety.

For those familiar with Vaughan’s past work, the strength in portraying the interpersonal amidst the bombast of genre is a trait that’s permeated his best writing throughout his career in comics. In that sense, Saga #46 represents some of his most focused writing in the series, with potent dialogue between the characters. While much of the conversation runs the risk of going off the rails as Vaughan focuses on hot button issues like transitioning and abortion, the writer handles them with a level of care and respect for both his characters, and the real world analogues they represent. It avoids having the topics they talking discuss feel like white man speaking off mount pious to his readers, but instead as a natural extension of the story and it’s actors. Their viewpoints, discussions, and evolution’s of thought are complex and messy, but feel honest and real to what’s been established over the series as a whole and within the context of the current installment. Saga #46 is about people, and all the myriad ways we interact, oppose, come together, and are forced to leave one another. Vaughan doesn’t shy away from the reality of any it, and it makes for an incredibly layered, complex and heartfelt examination of human nature, and how those individual aspects of one person shift and evolve when being confronted against the contrast of another perspective.

Saga artist Fiona Staples has been the chief architect and executioner of the series most awe inspiring moments with her phenomenally imaginative art work and visual storytelling. Yet, while Staples Saga work is often defined by her large scale bombast and boundless creativity, she excels in the small stake intimate visual storytelling of issue #46 just as well as the books more epic settings. Issue #46, for all intents and purposes, is a “talking head” issue, and one where it’d be easy for the artist to coast through. But Staples expression and character acting is superb and engaging, with an incredible range that hones in on the cast humanity. It’s an expressiveness that never feels over the top or too pronounced, but clearly conveys the emotional and intellectual weight of the communications among the books protagonist in her exceptionally clean line style. Staples proves once again why she is among the most revered modern visual storytellers in the medium for how compelling she makes the ordinary and familiar.

There are many obvious reasons for Saga’s success and universal acclaim; it’s a sprawling and beautiful science fiction epic that is full of surprise and amazement at every turn. Yet, beyond all that, Saga has always worked to a deeper degree for how engrossing it is on a micro level with the expanded casts fascinating personalities, and the dynamics those create for the relationships with one another.  Issue #46 pushes that aspect of the series to the forefront, and it’s a stark reminder of the series core that ultimately shapes the entire whole. Saga is often one of the best single issues month to month for a variety of reasons that have been laid out countless times over. But in issue #46, its fundamental focus on the characters personage that makes the titles most important strength clear. Beyond the space travel, the adventure, the action, the titillation, the imagination, the wonder; there is the book’s complex humanity, and it’s that which is the most awe inspiring.