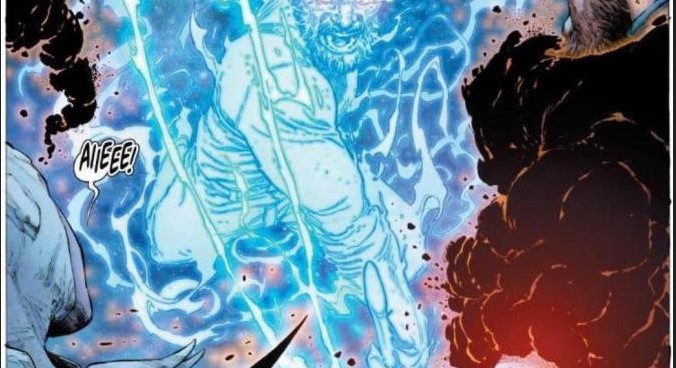 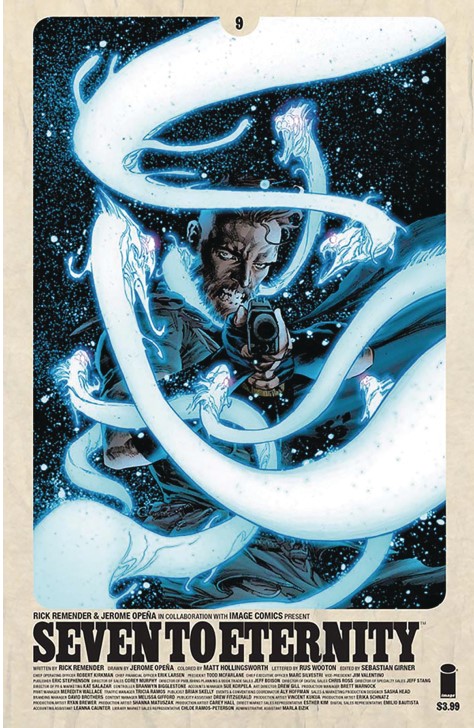 Can the candid words of a tyrant be trusted? Can the intentions of a dying man be selfless? These are just a few of the questions posed in this week’s issue of Seven To Eternity. In this series, Remender has consistently tiptoed the line of compromising his character’s integrity. In issue #9 the characters are no longer tiptoeing that line, they are straight up straddling it. But wait, there is more! Not only do we reach a new high point in Adam’s morally ambiguous journey, but with Jerome Opena back on the book teamed up with colorist Matt Hollingsworth, we get some absolutely incredible fantasy action pages that rival any big budget film. My phone screen saver used to be a picture of Pennywise, now it is a picture of spirit Zeb plunging his dual wielding lightning swords into the belly of the Black Well. I believe a fist pumping “F**k yeah!” is required at this time. 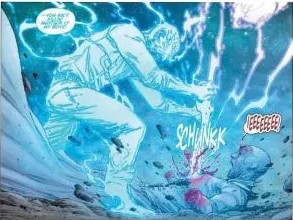 Okay,  rewind for a second, before we get too far ahead of ourselves. Pretend you didn’t read that Zeb-daggers-in-the-belly-of-the-Black-Well stuff I wrote last paragraph because this issue centers around the journey Adam and the Mud King are taking to the fabled Springs of Zhal, which will cure Adam of his deathly illness. Now, Adam made a promise to his father to never, ever hear the Mud King’s proposal. See, The Mud King is not like other fantasy villains. He has this intuition which allows him to know your deepest desire. Guess what? He will grant that desire to you, but then you become his slave. He is able to link with your body to see and hear through you whenever he pleases. So just shoot the fucker in the head right? Wrong. Everyone he is linked with will die if he dies, which is a very bad thing seeing as he owns practically everyone in Zhal. Okay, so Adam promised his dad that he would never hear the Mud King’s (also known as The God of Whispers) proposal. Well, to keep his family safe, Adam did in fact hear the proposal to heal himself of his terminal illness. Naturally, Adam kidnapped the King, betraying some new friends in the process, and is on his way to find the Spring. There, now that we are all caught up we can talk about issue #9.

The issue is prefaced with Adam’s journal entry stating that the Mud King is not what he expected, whether or not it was an act he believes there was some truth behind it. But, even with that journal entry here is something I didn’t expect; the Mud King is kind of charming. We get a different angle on the tyrant in the beginning of this issue. He tells us that he has saved more lives then he has ruined. When Adam questions why the King doesn’t project to the world some of these good things he claims he has done, the King basically responds, because people suck and already have their minds made up. If they wanted to believe the tyrant stories then they will choose to disregard any of the good stories. Every side in war thinks they are the heroes. He follows this up with saying that people are inherently selfish. The desires that everyone has, the life force driving their every move is at it’s core, selfish.  The depth Remender has added to the Mud King was unexpected. We even get a flashback scene of the King as a young boy reading the minds of others and finding out how terrible everyone is, even those close to him. It makes sense that hearing the terrible thoughts of others could really mess up a young boy. But actually, it seems as though the King has taken it really well. He made a decision that he would use the selfish nature of the population for his own selfish gain. The whole premise of his power is based off of people choosing themselves over others. If no one accepted his offer then he would be powerless.

Adam, on the other hand, is struggling with his own moral compass. Claiming that everything he does is for his family and any blood on his hands along the way is so his family can be safe. In this issue, he sounds a lot like early Walter White and we all know how that one turned out. Adam may be arguing with the Mud King, but he is also going against everything his father taught him and he is doing so to save his own life. The protagonist who is passionately refuting the antagonist’s world view is actually actively falling deeper and deeper into it with every step. Every man has a price. This is beautifully crafted dialogue with so much ugly truth in it, you can’t help but stop and appreciate the uneasy feeling it gives you. Adam’s reactions to the Mud King feel raw and real. At times he brings up good points, but when the King has an answer for it, he quickly resolves to changing the subject or disregarding the response altogether.

Remender has always been one to add depth to his characters making his heroes hopeless wrecks and his villains troubled souls. However, with Seven To Eternity he takes the angst out of it and creates very real feeling characters.  It isn’t that the good guys are actually bad and the bad guys are actually good. There is more to it then that. It is more like everyone draws their own line in the sand between right and wrong, and everyone has a point where they will cross that line.  Adam’s line was not hearing the Mud King’s proposal. But, once he saw no other option he heard it. After crossing that line one time, it is hard not to do it again. Right now he is looking back at that line and wondering if he can still see it. The Mud King, on the other hand, is the only one who understands what makes people tick. He is very calm and confident, making his speeches very hard to ignore. It makes for a very interesting experience as a reader where you are constantly flip flopping with who you agree with. Like in Breaking Bad, I think we might get a point where we realize what Adam is doing is right, or wrong.

While half of the issue is the Mud King massaging Adam’s already struggling guilt complex, the other half is Adam battling one of the Mosak knights who he recently betrayed. This is where Remender can let the magical fantasy ideas fly because with Opena and Hollingsworth at the wheel, you know it’s going to look fucking rad. Adam is able to get the upper hand in the fight despite his ancestor spirit shooting gun turning on him. He is able to knock off the Mosak’s helmet just to discover that this helmet was in place to keep a greater evil at bay. Some crazy looking smoke starts to shoot out of The Black Well’s forehead and it looks like this might be the end of Adam, until the Mud King releases the spirit of Adam’s father Zeb who saves the day. These action panels of spirit Zeb and the Black Well are amazing. The detail Opena puts into these giant action panels mixed with the vibrant colors from Hollingsworth make them poster worthy. Opena has a way of making everything feel big. The close up panels have so much detail, you really get a sense of the characters reactions and movements while also understanding their physical state. Then he can also pull back for the far shots where he uses every inch of space to create the vastness and beauty of the world. There is one panel in particular which is just Adam talking to the King, but it is from Adam’s perspective who has to look up at the King and we can see in the background the beautiful starry sky with birds in the air and a dude parachuting. He uses every inch of that small panel to turn a boring heads talking panel into a vast and active world. Then of course, the final page where the spirit of Adam’s father is walking off while Adam is brought to his knees on the edge of the rock, breathtaking. I think Remender saves his most ambitious ideas for Opena and it is very clear why.

In this comic, there is no discernible hero and villain. Each character thinks they are the hero because it is in their nature to believe what they are doing is right. And in contrast to that, for every character that thinks they are doing the right thing, there are a handful that morally oppose their actions. Seven To Eternity is a fantastic character study, you will see yourself in everyone and no one, depending where you look.