The new arc of Saga finds the cast scattered into three groups. The first consists of Alana, Klara, Izabel and Hazel. They are currently being held hostage by Dengo, a Robot determined to right the social injustices of the Robot Kingdom. As leverage, he has kidnapped the infant son of Prince Robot IV; as part of his vengeance he has murdered the Princess, mother of the child and wife of Prince Robot IV.

This naturally did not sit well with Prince Robot, who formed an uneasy alliance with Marko. Both of them need each other to track down their child, yet both of them also blame the other for their child’s misfortune. Traveling with them is Yuma, who betrayed Alana to Dengo and thus is not held in too high a light by Marko or even Prince Robot. In their middle of all their bickering and blame-casting, stands Ghus adorably befuddled by all the drama. Finally, Gwendolyn, Sophie, The Brand & Lying Cat track dragons whose, ahem, bodily fluids, may prove a medicinal remedy for The Will’s illness. The good news is that they successfully find dragons. The bad news? Well, it’s really more like the dragons found them . .

Vaughan does an expert job of alternating between these various groups, always keeping the reader clear of where action travels next. One of the strengths of Vaughan’s writing throughout the series has been his ability to seamlessly slide new characters into the ongoing story-line, steadily expanding the narrative’s scope bit by bit. This is true of #25, which ends with the introduction of a few new faces which promise to play an important role in upcoming events.

At the same time, Vaughan has been gradually deepening the social commentary of his story. In the previous arc, Dengo brought attention to the class disparities within the Robot Kingdom. His drive for revolution comes from a very real outrage at the plight of the less fortunate, such as himself. Vaughan opens the fifth arc along a similar vein. Hazel narrates how the conflict between Wreath and Landfall effected the different levels of society. At first, Landfall filled its armies through a lottery, in other words a draft. In such a way, all ranks of society shared the sacrifices, including the loss of life.

However, as time went by, certain segments became less willing to volunteer their children for the cause. Not that they stopped believing in the fight’s righteousness; in fact their lust for their opponent’s blood was stronger than ever. They simply lacked the resolve to pay for it with their own. And so the army became all volunteer, its ranks overwhelmingly made up by recruits from the lower classes searching for a way out of a life with precious few options. Then, as more time passed, both Landfall and Wreath found proxies for their conflict, moving the battlefields further and further away from their homelands. Everything about the war from sacrifice to veterans’ care became more abstract, no longer worth a second thought to the materialistic, pleasure seeking citizens in whose name whole planets were being desolated. If any of this sounds familiar it, it should: it mirrors very closely the evolution of the United States military from the Vietnam War to today. 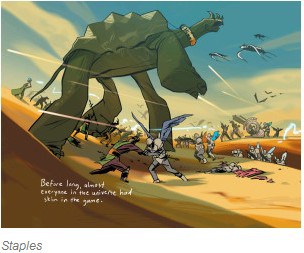 Matching Vaughan skill as a writer, Staples’ art continues to excel. This issue calls for a variety of settings and moods, requiring that she illustrate everything from a turtle monster to frigid landscapes to glowing dragons to a cute seal creature in overalls. Her imagination is boundless, which is reflected in the variety of design for the new characters which arrive on the final page. Between her visuals and Vaughan’s storytelling, Saga is back and just as thrilling as ever.