In my column last week, I examined the early adventures of Captain Universe, and how writers explored the idea of everyday people as superheroes. I also discussed how the authors of these adventures used them to comment on issues of the day, such as the women’s movement or juvenile delinquency. Despite this social awareness, these stories do date in some aspects. Today, I am going to discuss another series which updates this idea of an everyman hero.

In 2003, just a little over twenty years after Captain Universe’s debut, DC launched a series H-E-R-O by Will Pfeifer and Kano. The concept itself was nothing new; in fact, it predated Marvel’s Captain Universe. Dial H first appeared in 1965 as the lead feature of House of Mystery #156. The story, credited to Dave Wood and Jim Mooney, tells the tale of Robby Reed, an average American teenager who discovers a mysterious device. When he presses the buttons in a certain combination (seemingly spelling out “HERO”) he is temporarily transformed into a super-powered being. So far, pretty familiar, right? The twist is that each time he uses the dial, he becomes a different hero with a different power set. He is, as the tagline proclaims, “The Boy Who Could Change into 1,000 Super-Heroes.”

The feature ran for nearly twenty issues, terminating with #173. After that the concept would be revived periodically, most extensively in the early 80s, though even here it jumped around between a couple different titles. Of note is the fact that DC invited readers to submit their own character designs for heroes and villains appearing in the stories. If your submission was selected you received credit and a (hopefully non-lousy) t-shirt. Naturally, DC assumed rights to your creations. To be honest, I have not read any of these early takes on the Dial H concept. They sound like pretty standard fare for their time, including Robby’s habit of exclaiming “sockamagee.” I like to imagine the phrase a jumbled version of “sock it to me,” but obviously it isn’t. The later 80s tales start sliding off into some darker places with possible shades of exploitation. Again, having not actually read them, I cannot comment further.

My first real experience with the concept came with the most recent incarnation Dial H by writer China Mieville. This fabulous series left me interested in other takes on the concept. With this in mind, I picked up H-E-R-O: Powers and Abilities by Will Pfeifer and Kano, which collects the first six issues of H-E-R-O. Pfeifer continues with the idea of an average person gaining powers, but adds more variation to it. The other Dial H series focused one or two individuals, such as Robby in the original or Nelson and Manteau in Mieville’s. Pfeifer goes in a different direction, passing the dial around more. For the first four issues, the dial is with a young man, Jerry Feldon. After that it spends one issue with Matt Allen before passing into the hands of his teenage daughter, Andrea. In this way, the series bares a stronger resemblance to the Captain Universe concept that anyone could suddenly become a hero. 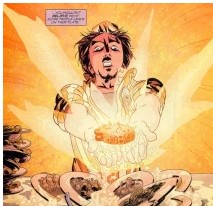 Pfeifer also picks up on the social commentary thread of those early Captain Universe stories, looking more deeply into how the average person would react to suddenly receiving such abilities. As I remarked last week, recipients of the Uni-Power always instantly figured out what was happening to them and how to harness it. When Jerry first dials a hero, he has a bit of a learning curve. In fact, he is a bit of a desperate state. He lives in Heaton, Pennsylvania, a former factory town where the factory is long gone. As one of the “lucky” ones, he holds down a dead end job soda-jerking. There is a co-worker he likes, but cannot work up the nerve to ask her out. Plus, she seems too obsessed with the time he saw Superman. No, how could he compete with that? So, one night he finds himself alone, on a roof top where he used to come drinking with his buddies. In his hand is a strange device that he found while on dishwashing duty at the shop. For no good reason, he starts fiddling with it and—BAM!—he is flying through the air.

What is so appealing about Pfeifer’s portrayal of Jerry is that he has good intentions, even if his follow-through is lacking. His instinct is to be the hero, but unlike Captain Universe, mastery of his abilities does not come naturally. On his first flight as a hero, tries to stop a drunken driver, only to inadvertently injure himself, while sending the driver careening off the road, crashing into a traffic sign. Transformed back to Jerry again, he calls the police to report the accident. On another occasion, an attempt at scaring a drug dealer straight ends with Jerry misjudging his strength and savagely beating the criminal. Again, terrified that he might have killed a person, regardless of how reprehensible, he rushes the man to the hospital in a panic. This pattern repeats through Jerry’s narrative. However, Jerry is not a hopeless case. He learns from his experiences so that even after he no longer possesses the dial, he finds a way to help others. In his case, he demonstrates how truly the hero could be you.

Issue #5 finds the dial in possession of a hotshot businessman, Matt Allen. For him, the dial feeds his ego, blinding him to the concerns of those around him. In his encounters with criminals, he seems detached, as if the crime committed (which is never named) is less important than the adrenaline rush from stopping it. Similar to an addict, Matt grows increasingly withdrawn from his co-workers, friends and family. He lets everything he has built for himself crumble away. Even after his wife leaves, stealing away with his daughter while he’s at work, his main concern is finding where he misplaced the dial.

Matt never finds the dial, because Andrea had stumbled upon it while preparing to leave with her mother. She does not know what it is, only that it seems important for her to possess some sort of souvenir of the father she may never see again. Eventually, of course, she does try it. Unlike the adult men, however, Andrea does not use the dial for crime-fighting. She uses it more simply for escapism, giving herself a sense of power which seems lacking from the rest of her life. She shares it with two of her friends, causing hijinks at the school. This issue has a more whimsical tone that the previous five, yet Andrea is no less compelling of a character. She seems just as important, but also more naturalistic, a depiction of a teenager with powers than Delayne as Captain Universe two decades earlier.

From here, the series continued to follow the dial from user to user. For a few issues Pfeifer examined how street-level criminals would take advantage of such a device. Eventually, he brought back Robby Reed in a subplot that leads into the series’ conclusion at #22. It would seem that no iteration of the Dial H concept lasts more than a couple years. In fact, DC has never bothered to collect more than the first six issues of the 00s version. However, I would definitely recommend seeking out Powers and Abilities. For my part, I shall be searching for the remainder of the series at my next convention. Having enjoyed the first six issues, I look forward to discovering where Pfeifer took the concept next.