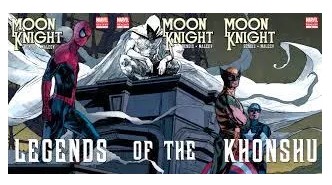 Considering Moon Knight By Bendis and Maleev. A Debate

Warren Ellis released the first issue of his new Moon Knight Series and it was met with universal acclaim. Prior to this Moon Knight’s last series ended in 2012. The series was launched to much fanfare from superstar creators Brian Michael Bendis and Alex Maleev but ended up being severely polarizing. Some people love Bendis and Maleev’s run on Moon Knight like me. Others think it sucks like our own Ithorsapien aka Josh. We debated it’s merits and now we are sharing that debate with you.

Josh: Ok, Pat; sell me on BMB’ Moon Knight run, why should I care? 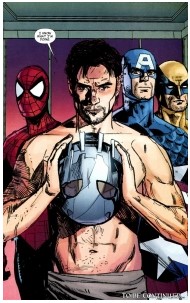 Pat: Alright so for me I think Moon Knight under Bendis and Maleev was a very interesting and ambitious idea that doesn’t quite fully form mostly because it didn’t have the chance after not finding the audience. Now first off Bendis didn’t come up with Moon Knight having Dissociative Personality Disorder. Recent runs prior to his had him taking on the personality of his alias which is stupid. What Bendis did is took that and flipped it on his head. It was already established that Moon Knight was crazy by the time he got to him, Bendis attempted to use it to his advantage. With the three personalities the best part was in the first issue when it’s revealed in the end. Completely unexpected and totally original. With that Bendis uses the multiple personalities as a commentary on superhero’s in general and those superhero’s in paticular. How does Marc Spector perceive them? How does his perception affect the personality that is in his mind? How does it affect his actions when he’s acting out those personalities? It was a way to do a character study of one person through the prism of more recognizable hero’s and while it didn’t always worked it’s kind of brilliant. Also I don’t know how you feel about the art of Alex Maleev but I fucking love it when he illustrates dark urban settings and it was cool to see him apply that to Los Angeles.  So tell me what did you not like about it?

Josh: Bendis’ proposal is sound on paper, but good ideas only get you so far. 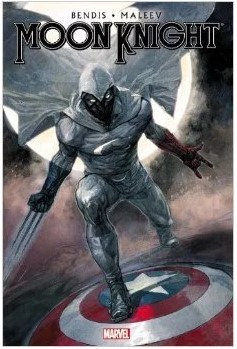 When Bendis took the reins after MK’s damning Shadowland mini, he had a choice; back to basics or push forward. So he pushed MK to LA cause why not, ripped him away from his supporting cast, had him make a tv show of his life, and dress up as three of the four heroes he met most in his previous runs. The problem comes in when he’s acting like Wolverine with none of Wolverine’s fight skills and claws and grrring without his mask in a crowded room. He didn’t adapt the other heroes skills and techniques, he cosplayed as other Avengers which seemed to fail most of the time. Marc Spector being Moon Knight had gotten him this far so why change to these other identities when it’s not working? I’m not sure how DID works; but the previous runs made it seem like Marc burrowed into his other personas as a coping mechanism. It served a purpose other than him being crazy; Spector was too far gone so Jake Lockley came in, then for some reason Steven Grant took over. It’s plausible that Marc Spector would come back in after Shadowland, but not that he would just alternate dressing up as Spider-Man then switch to Captain America when a fight went bad. Jake Lockley was more level headed than Spector, which is why that persona was chosen.  Spector put in so much effort to imitate other heroes instead of actually being Moon Knight and trying to improve that persona. Maleev was fine, in fact I would say he was my favorite part of the book.

Pat: “He didn’t adapt the other heroes skills and techniques, he cosplayed as other Avengers which seemed to fail most of the time. Marc Spector being Moon Knight had gotten him this far so why change to these other identities when it’s not working?” 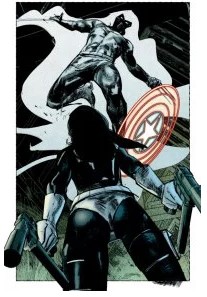 I’m going to address this is reverse order. “Why change” is a perfectly logical observation because there really is no reason for that. Now as for not adapting I think that’s the point. You are seeing who Spector is in the context of how he acts out other peoples actions. You are seeing Spector by how see’s other people. Why does he switch from Spiderman to Captain America? What makes him use the Wolverine persona? That’s all over this run and if your looking for it that’ll keeps you on your toes. Even without that on a base level I still think it functions as a great story about a guy with baggage that is hiding his dissociation personality disorder in plain sight while juggling two separate lives as a crime fighter and a movie producer.  I think you also have to cognitively decide not to get hung up on the different personalities being who they are but if you don’t it’s pretty great. Is your main issue that it’s those personalities and that doesn’t jibe with continuity or is it more that those personalities didn’t make sense to you?

Josh: Neither.Spector’s imagined personas; Spider-Man is all about surprise attacks, Wolverine charges in, Cap assess the situation, are not entirely wrong. Years of knowing these people you would think he could go alittle deeper with his thoughts on them. It seemed to me that Bendis took away alot of what made MK interesting. Which if you want to revamp him, that’s fine but you have got to replace (successfully) what you’re taking away from the character. Losing MK’s crescent darts and replacing them with fake claws and crap web shooters, switching out his brutality for cute Avenger ghosts, dropping Frenchie, Marlene, and Crawley for Lucious Fox and Echo. Not to mention when he changed, he could start out dressed as Spider-Man, get that torn off and now he’s Wolverine cause he’s growling and has claws and no mask with his MK costume showing. Now, if he had borrowed the web shooter, claws, and shield and combined them with his old techniques that made him a better hero than that would’ve worked with the Avengers personas guiding him with advice. That would’ve been cool. There’s also the problem that aside from rare instances, Spector’s ghosts never interacted with him aside from Khonshu. I don’t think a crazy person can say “Hey, I want to change my neuroses alittle so people will like me”. He could get worse with his previous condition which has been done sure, but if we’re gonna see a seismic shift on MK’s mental process seeing the catalyst would have been nice. 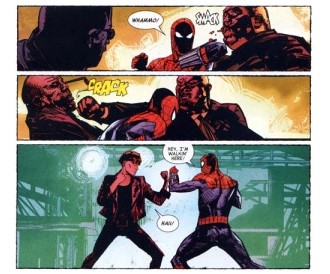 Pat: Those are all strong points. I think in order to enjoy the series you need to leave pretty much all your preconceived notions of Moon Knight at the door and just roll with it which is admittedly hard for anybody that was expecting Moon Knight they’ve been reading for years or sometimes decades going in. I’m sure the idea was “people love Bendis let him do what he wants” and that’s what he did without considering continuity or anything else. I suppose ultimately that’s a failure for the series because while I think it’s good in and of itself when your doing superhero’s you pretty much have to consider the context of continuity on some level. I guess that’s part of what makes superhero comic criticism interesting; it has so many different layers and factors to consider. I still think the series is great but I’m willing to concede that it was probably to much at the expense of past continuity. Any final thoughts?

Josh: Yeah, Warren Ellis did it right. Props to Bendis for trying to make Moon 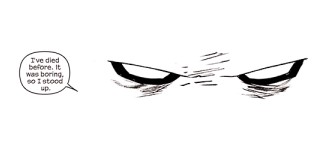 Knight more accessible even if it didn’t work out. Ellis has done a more faithful and interesting take in his one issue than any I saw in Bendis’ though. Ellis acknowledges MK’s rich history and the Lockley and Grant personas as well as the visage of Khonshu on Spector’s shoulder. We see him making a conscious adjustment in methods that make sense and are actually working for him (working sans crew, with the police under the Mr.Knight moniker, toning down his brutal tendencies, and wearing a costume somewhat in line with his classic look). I could talk all day about how great the new issue is; the point is Ellis took what was great about the MK and gave me a great story without having to use Avenger gimmicks or ultra violence. Bendis threw away alot of the stuff Ellis embraced; maybe it made his MK run great, but I know that the opposite was true for his Daredevil run and THAT was a fantastic run built on previous continued and concepts