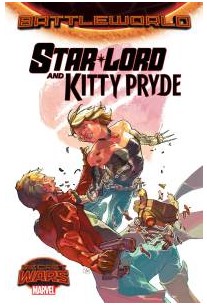 Starting this issue with a song from The Little Mermaid put my mind in a certain “state” for the whole comic. I’m not sure if that was the point, but in any case, that is what happened. The book opens with Peter singing Part of Your World as he explains that on Battleworld they don’t have Disney movies, so everyone thinks he is a musical genius. A pretty funny concept, for sure. However, I think the choice of The Little Mermaid was an interesting one. A movie that in my opinion has a sexest empty story with an outstanding soundtrack. If you are unfamiliar with The Little Mermaid (then you haven’t been to karaoke with me) it’s about how a woman with an amazing singing voice gives it up to be with a man, but in turn cannot use her voice at all. She must make the man fall in love with her, without a voice. By simply looking cute and being clumsy, Ariel is able to make the prince fall in love with her…bullshit. How can you fall in love with a girl that you can’t communicate with? It isn’t like she was charming, or able to sign or write to him. Basically, it was her beautiful looks that won over the prince. Alright, maybe I am being a bit harsh, it does have a really good soundtrack. Anyways, I thought that was an interesting choice to begin a comic about a very strong willed and compelling female character, Kitty Pryde. Kitty is what the Disney Princesses should strive to be. She doesn’t take any crap from men, even Gambit the collector, that charming smug bastard. When the extremely popular Disney singer, Peter Quill, lays one on her she punches him straight in the mouth. This is a great issue for Kitty. Oh did I mention she has adamantium claws, where did those come from?

Alti Firmansyah’s art looks like a Disney movie. Again, I’m not sure if the song put me in this state of mind or not but this art looks like it should be preceded by the magical kingdom. That is not a criticism by the way, I think it looks great. It reminds me of the good old days of Disney when all the best movies were coming out. Kitty is the princess of the story and Peter the prince, however things might not follow exactly as the classic stories go.

I was not expecting much out of this book and I think story wise you aren’t going to get anything that makes you scratch your head or pull out a calculator. However, it is fun and enjoyable. If you are like me and can get your mind into the Disney mode, I think you could actually have a good time with Star Lord and Kitty Pryde #1.