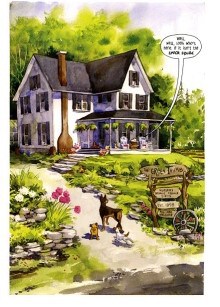 In 2003, Evan Dorkin was offered the chance to contribute to The Dark Horse Book of Hauntings anthology. The idea of writing a horror story had long interested him, even if he had little desire in a conventional shocker. After toying with various ideas, he settled on the concept of a haunted doghouse. Yep, doghouse. Hence was born the series of stories which would eventually be labeled Beasts of Burden.

Burden Hill is a small everytown. The people population pretty much goes about their business, while the dogs, along with a feline hanger-on, amuse themselves. Recently, though, Jack has been having trouble sleeping, as there is something unsettling about his home. Suddenly, he would rather spend a night out in the rain than under his own roof. At their wits’ end, they decide to howl a summons for the Wise Dog. To the surprise of some, this ritual actually works. The Wise Dog (a magnificently shaggy character) is able to summon the spirit, and learn its story. It would seem that canine ghosts, similar to many of their human counterparts, are restless spirits due to the tragic circumstances of their death. The Wise Dog is able to sooth the departed, however, releasing her for more peaceful pastures.

“Stray” is only eight pages long, yet it does a good job of establishing the tone of the series. Mixed in with the horror is a fair amount of humor, much provided by the ever gripping Pugsley. Dorkin, along with artistic collaborator Jill Thompson, elaborate on this formula through their three succeeding anthology tales. In one the animals confront a coven of witches (and, naturally, their black cat familiars), while in another they must face down a pack of zombie dogs. As in “Stray”, Dorkin is clever in how he plays with the tropes of the horror story. At the same time, he continually fleshes out the various animals as distinct individuals, possessing characteristics recognizable from both pets and people. The most moving of these anthology tales is “A Boy and His Dog,” co-written with Dorkin’s wife, Sarah Dyer. The huskie Ace discovers a strange tattooed adolescent sleeping in his dog house. Human and huskie quickly bond, only, well, let’s just say that things grow tragic when the full moon rises. In spite of it all, though, Ace exemplifies the ideal of dog as man’s best friend all the way to the final heartbreaking climax.

Based on the success of these short stories, Dorkin and Thompson released a four issue Beasts of Burden limited series. (Dark Horse has collected that mini-series along with the original four stories in a lovely hardcover entitled Animal Rites). Dorkin continues with the anthology format, as each issue of the series is a stand-alone tale. However, while the previous stories were good, these four are excellent. Through increased page count, Dorkin presents our heroes with heightened stakes & more dire threats. At the end of #1, the Wise Dog formally inducts the animals into his mystical Society as junior apprentice watchdogs (and watchcat). Despite Pugsley’s protests to the contrary, the Wise Dog insists they are more than ordinary animals. Indeed, they are now on the path to becoming wise dogs themselves.

By the way, if all of this sounds rather canine-centered, cat lovers should note that the ginger Orphan is prominently featured throughout the stories. He is a great character, who gets his turn to shine as the primary hero of “Something Whiskered This Way Comes.” It is also one of the best stories in the collection.

Dorkin’s editor at Dark Horse originally wanted Dorkin to illustrate the first Beasts story himself. He declined, insisting that Thompson be offered the job. Luckily for us all, she accepted. I have long been a huge fan of Thompson’s work; she was illustrating Sandman when I first started buying it in issues all those years ago. Her painted art for Beasts is truly outstanding. She conveys the fantastic with the proper sense of wonder and dread, such as the gigantic, demonic frog creature in “The Gathering Storm.” Along with these foreboding supernatural scenes, she also conjures beauty out of the everyday world. The opening splash page to “The Gathering Storm” is a stunning image of a cozy house on a tranquil day. In addition, she perfectly captures how these animals move; they never feel anthropomorphized, just dogs and cats who happen to talk. Finally there are the animals’ priceless facial expressions. Whether conveying fear, bravery, humor, concern or any other emotion, they cannot help but affect the reader. Simply put, this is beautiful artwork.

Over the course of seven years, Dorkin and Thompson have taken their Beasts from a one-off variation on the horror genre to a fully realized world of dogs and cats protecting us from supernatural threats. Dorkin and Thompson have continued to release one-shot issues, including Hunters and Gathers earlier this year. Hopefully, readers will eventually get a new limited series from the creators. I have the suspicion that an ongoing would be too much to hope for. Then, again, who knows what The Great Dog in the sky has in store for any of us . . ?