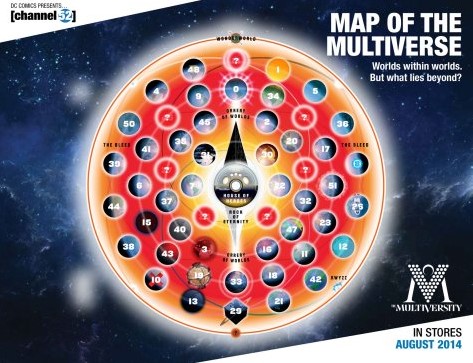 Infinite Worlds: A Brief History of the Comic Book Multiverse

Both DC Comics’ Multiversity series and Marvel Comics’ Edge of Spider-Verse event showcase characters from multiple parallel universes (that is, a “multiverse”).  These two series are not the first time that the multiverse concept has been used by DC and Marvel.  Over the years, the publishers have each established a multiverse of parallel universes in their respective comics, and the concept has become a popular element of superhero comics.

The concept of “parallel worlds” – defined by The Science Fiction Encyclopedia as “another universe situated ‘alongside’ our own, displaced from it along a spatial fourth dimension” – has a long history that predates science fiction.  The parallel world concept can be found in ancient philosophy (for example, Platonism), religion, folklore, and myth (Heaven, Hell, and Asgard can be described as parallel worlds), and literature (Lewis Carroll’s Through the Looking Glass).

In 1956, DC Comics editor Julius Schwartz oversaw the revival of the comics character The Flash.  First appearing in Flash Comics #1 (January 1940), the original Flash was Jay Garrick, who gains the power of super-speed after inhaling hard water vapors. The character’s adventures continued through the 1940s, the period labeled by comics historians as the “Golden Age of Comics”, and ended in 1951, when superhero comics lost their commercial appeal and were replaced by other genres like Westerns and horror comics.

Schwartz kept the superhero’s name and superpowers, but changed The Flash’s design and alter-ego.  The Flash was now Barry Allen, a police scientist who gains super-speed when he is soaked in lightning-charged chemicals.  The new Flash debuted in Showcase #4 (October 1956).  Significantly, the comic acknowledges the original character’s existence; indeed, Barry Allen is inspired to assume his superhero identity because he reads the fictional comic book adventures of the Golden Age Flash.

Comics fans were eager to see the return of the Golden Age Flash, and DC Comics obliged.  The two Flash characters first met in The Flash #123 (September 1961) in the story “Flash of Two Worlds”, using the parallel world concept; the Silver Age Flash vibrates his molecules at a different frequency at super-speed and is accidentally transported to a parallel world, where the Golden Age Flash fought crime in the 1940s and is now retired.

This parallel world (identified as “Earth-Two” in future stories) was the home of Golden Age characters like The Flash, The Spectre, and The Sandman, while Barry Allen’s world (“Earth-One”) was the home of the modern DC Comics superheroes.  Soon, DC Comics added other parallel worlds, like Earth-Three (the home of supervillain versions of the Justice League of America), Earth-S (the home of Captain Marvel and other Fawcett Comics characters purchased by DC), and Earth-X (where the Quality Comics characters purchased by DC – Uncle Sam, Black Condor, etc. – fought the Nazis, who won World War II on that world).  DC Comics soon had a robust fictional multiverse.

In 1985, DC Comics destroyed its multiverse in the crossover event Crisis on Infinite Earths, which revised DC’s narrative history so that there was now only one Earth; the Golden Age characters appeared in the 1940s and retired in the 1950s, but inspired the modern superheroes that came after them.  However, DC Comics revived the multiverse concept in its weekly 52 comics series (2006) and the subsequent Flashpoint crossover event (2011), so that there are now 52 parallel Earths.  These parallel Earths will be explored in the upcoming Multiversity series.

Marvel Comics’ multiverse continues to be well-utilized by creators.  Earth-1610 (identified as the “Ultimate Universe”, the home of 21st century updates of the classic Marvel characters) has been the setting of several popular comics titles.  Marvel’s upcoming Edge of Spider-Verse series will showcase versions of Spider-Man from across the Marvel multiverse.