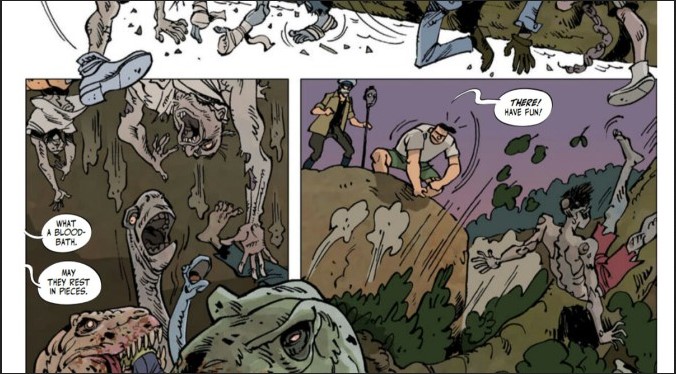 Pop culture is over saturated with zombies. The Walking Dead is the tipping point with it’s ubiquitous popularity across multiple platforms of media, but it’s also the sum total of decades of the concepts proliferation.  From Night Of The Living Dead all the way to World War Z, the zombie myth may be the most popular and resilient horror concept of the twentieth twenty first century. Werewolves, ghosts, Frankenstein, vampires; none of them have seen the same level of popularity or sustaining relevance as zombies. With the proliferation of media available & being created, it’s become increasingly difficult to do something original with the idea. Enter The Z Word by Jerry Frissen, Guy Davis, Charlie Kirchoff & Jorge Miguel, whose ten year old series approaches the zombie apocalypse with the gift of satire at it’s most wackiest.

The Z Word is a new collection of the European series, The Zombies That Ate The World. It’s a viscous parody of the zombie genre & American culture in equal measure. Written by Belgium comics writer Jerry Frissen of the Image series Lucha Libre. with art by BPRD veteran Guy Davis & Jorge Miguel, The Z Word is a hilarious send off that pulls no punches. It’s premise is simple yet kind of brilliant in that, in 2064 zombies are real but instead of being an epidemic, are just another part of everyday life. They aren’t mindlessly eating anybody but instead, trying to live a normal life. In reality, it’s humans that are the real danger as they routinely abuse zombies for their own ends. While that’s a pretty dark metaphor, albeit a spot on one, it’s aided by the increased absurdity of the comic.  In that sense, Frissen, Davis & Miguel go all out in the best way possible. In the course of the the books 200+ plus pages they kill Sean Hannity, zombie George W Bush & zombie Jesus while creating a scam zombie moon colony, a zombie wolly mammoths and even zombie dinosaurs. 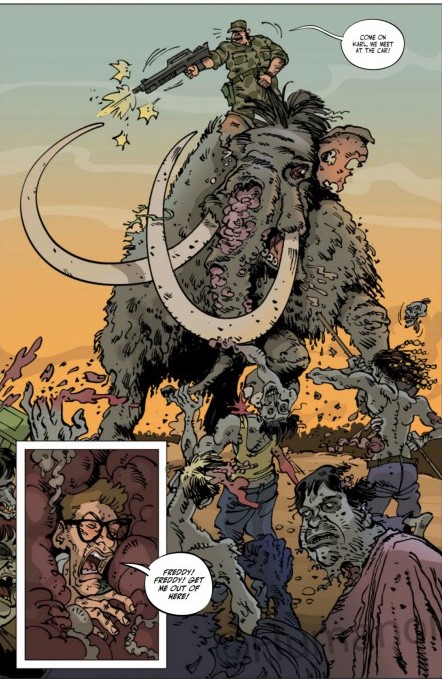 Frissen navigates the world through an eclectic cast of true assholes, headed by Freddy the Belgium, basically the worlds biggest goomba stereotype taken to it’s most logical extreme of inanity. Frissen introduces Freddy in the fourth chapter of the collection, appropriately titles Enter The Belgium, and the book ascends to another level from that point on. Freddy is a lovable moron who can’t help himself in his delightful stupidity & violence. Artist Guy Davis brings brings the same dynamic detail to his cartoonish style that readers will recognize from his BRPD work with striking and bright color work from Charlie Kirchoff while Jorge Miguel steps in for the latter half of the book maintaining the style and tone established by Davis & Kirchoff in the early chapters.

The Z Word isn’t for everybody; it’s humor can be crass and the translation can be awkward. The series was created between 2004 to 2008 and in that way, some of the jokes that were timely at it’s release can feel dated. But in other ways, it feels more then timely right now. As The Walking Dead has expanded to three separate television shows & the Tea Party has infiltrated the American politics, in that sense, The Z Word’s satire feels right on time.