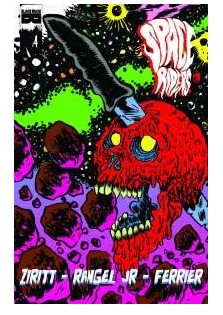 Ziritt and Rangel Jr’s Sci-Fi adventure comes to a close in this issue.

As the villainous Hammerhead seeks to kill Captain Peligro, he attacks the headquarters of the Space Riders to draw him out. Peligro obliges and takes Hammerhead on alone while his faithful crew seek to wipe out Hammerhead’s forces. The good guys win, the Galaxy is safe, and cue inspiring action music.

It’s been so long since I read issue 3 of this series, but I couldn’t care less. Having no idea what was happening just added to the experience of reading the book.

It crystallized with this issue that the creative team is probably Adult Swim fans, the Adult programming block on Cartoon Network that routinely has disturbing/personal/grotesque/imaginative shows that push the boundaries of animation. I could see a comic like Space Riders being an Adult Swim cartoon, with its self-aware writing and mash-up premise. Maybe a cross between Super-Jail and Mary Shelly’s Frankenhole.

The story plays pretty much like you would expect, with a few touches that make the book stand apart from its inspirations.

The art is the best mix of a six-year-old’s acid trip and old school cartooning. There’s a genuineness to the art, with the folds in the paper and coffee stains in the corner of the pages that make the book feel like a labor of love rather than a mass-produced commodity by corporations to sell merchandise. It feels more real than a book from the Big Two.

The art is rough, but carries a flair with it along with the neon colors and thick ink lines. Instantly retro but somehow fitting with the Post-Post-Modern we see occasionally.

Overall, a fun book that should be looked at by all to see what comics were and could be again; fun, trippy and weird.