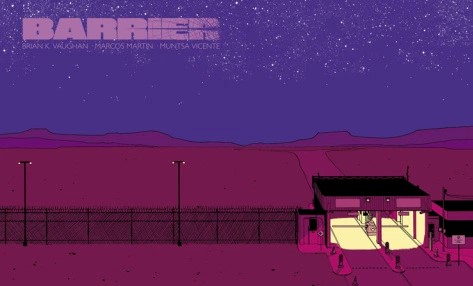 Sorry to bother, but would you like to read a brand-new comic I created with Marcos Martin? https://t.co/OqdUe9NMgT pic.twitter.com/TYlHf9bqx4

And just like that, another new series from one of comics all time greatest writers had arrived unannounced and unforeseen.

Barrier see’s Vaughan teaming up with his Private Eye/Doctor Strange partners Marcos Martin & Munsta Vicente for a strange introduction to the comic series that ends up being not at all what it seems.

Most of Barrier is a parallel story of an American rancher on the Mexican border in fear of the drug cartels killing her livestock & a man from Honduras trying to get into the United States illegally. In that regard, Barrier is a realist look at the two opposing sides of the American immigration debate.  It’s a stark contrast between the two protagonist that Vaughan and co fully commit to up to having the illegal immigrant section’s dialogue written completely in Spanish. It’s an interesting look at how the two separate cultures collide with Vaughan’s excellent character work and illustrator Martin’s signature box style of illustration. Colorist Munsta Vicente does an especially engaging job with these washed out and bright western color tones that give the comic a completely distinctive look from the trio’s past work together.

But then, as the two protagonist meet, Barrier becomes a science fiction comic instantaneously and almost completely devoid of context. There is a clever allegory here with the story choice and it’s certainly unexpected, but it also feels a little jarring. This is Vaughan’s thing, he creates real life allegory for current events with science fiction and ultimately, that’s exactly what Barrier is. But  in some ways, it feels almost like a bait and switch. The comic we get for the majority of the issue is fascinating and one that felt especially timely in out current political climate. While I trust Vaughan, Martin & Vincente to come through on this series, part of me can’t help but wonder what could have been had the trio decided to play this one straight. While I understand that it’s never really been their thing and they are clearly doing exactly what they want here, it also feels like if the team was going to play it straight, this would be the subject for them to do it on and this would be the time for them to do it as they are at the height of their popularity. And maybe that isn’t fair but Vaughan, Martin & Vincente make it that way by having so much of this debut issue focused on a story that is kind of ancillary to the main plot point yet a major issue in the United States.

Ultimately, I’m sure Barrier is going to be a great comic and most of it’s debut is a good comic as well, but because of the abrupt shift at the issue’s end, that feel’s like two different things and while I respect the creative teams choices, the comic I thought I was reading felt a lot more exciting then what I ended up getting. 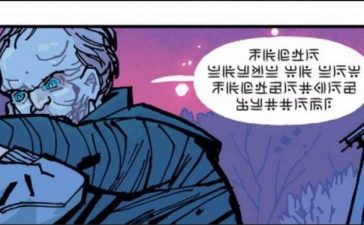