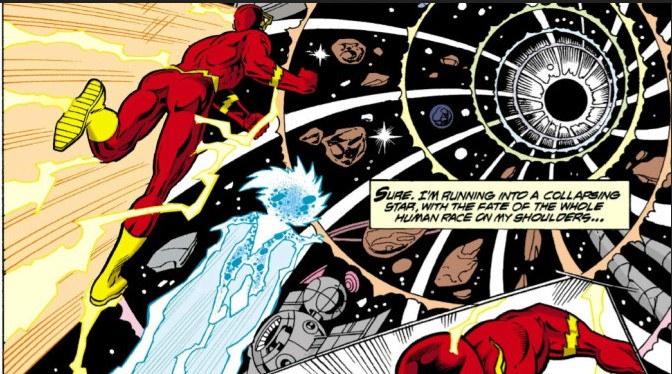 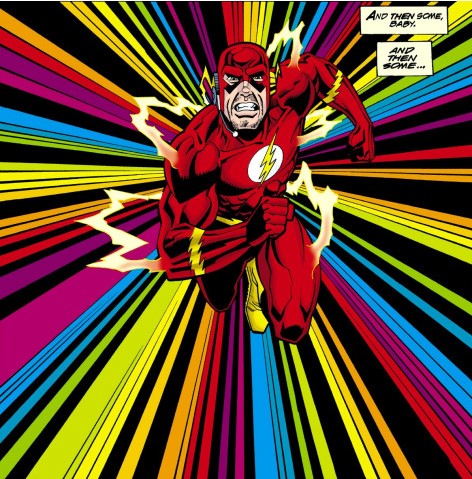 “ The Flash  is the only one left that I would still do. If I’m gonna do the Flash, I want to do it as a science-fiction story like The Incredible Shrinking Man or Stephen King’s Thinner, or The Fly, where you basically take a scientist and then subject him to a very simple equation. For Barry Allen, he’d just be getting faster and faster and faster — and what would that mean? Because somewhere up there is the speed of light, and when you hit the speed of light, basically all time stops and it’s the end. That’s the limit. So we’re watching this guy progress through it, faster and faster. By the end of Act 1, his clothes are burning off every time he moves, so he has to build himself a suit, and then he paints the suit red like a Ferrari and is just speeding around like he’s on coke all the time! I want to do that as a sci-fi story, but out of it comes the familiar image of the Flash. I think that’d be totally different, just taking it from a different angle”- Grant Morrison on writing The Flash in 2013

“I wish him well but there’s not good feeling between myself and Mark for many reasons most of which are he destroyed my faith in human fucking nature.”-Grant Morrison on Mark Millar in 2011

This is the Grant Morrison we know now, the veteran game changing writer that is basically done with the superhero genre. He would want to write The Flash at a totally different angle and he unequivocally dislikes writer Mark Millar. But this of course wasn’t always the case. At one time Grant Morrison was the most important figure in superhero comics who co-wrote comics with Mark Millar including nine issues of The Flash. You’d think that Mark Millar & Grant Morrison being who they are and who they have been for quite some time, their writing on one of DC’s most popular characters would be more widely celebrated or at least more well known, but that’s not the case. Nobody remembers their run or generally cares to seek it out. Morrison is known for Doom Patrol or The Invisibles, while Millar is mostly identified with his work on Civil War & Kick Ass as opposed to anything the two did together on The Flash. What happened? Why doesn’t anybody remember? Why don’t Morrison & Millar acknowledge their run on the title? 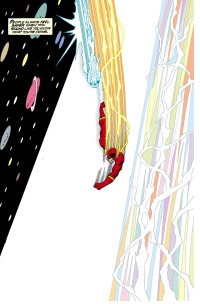 The story of Mark Millar & Grant Morrison’s working relationship starts in Scotland, where both writers hail. You can hear about it from Millar’s perspective in this Let’s Talk Comics episode, but the cliff notes version goes something like this: Millar met Morrison as a fan of the latters work and the two became friends. Morrison helped Millar get work at DC and the two would come up with story ideas together when they were hanging out that would end up being comics series co-written by the two. While Grant Morrison flourished, Millar struggled to sustain work on a series, and his comics were often on the verge of cancellation.
In 1997, Grant Morrison was at the height of his popularity having resurrected DC’s Justice League property with JLA and handling the successful DC One Million event. Millar was still struggling, but Morrison was continuing to work with the writer by letting him fill-in on JLA issues or co-writing series together like Aztek, Vamperilla & The Flash. At the time, The Flash was a series that had been defined by writer Mark Waid in a modern context as he’d been writing the comic for over 60+ issues before handing the title off to Morrison & Millar. The pair would do nine issues together in total, and Millar would write three more on his own. Afterwards and ultimately, Mark Waid would return. Their Flash is basically lost in the annals of history and overshadowed by longer and more popular creator runs, and that’s too bad because, in spite of it’s anonymity, it’s uniquely excellent.

With the Flash there is Garnder Fox, Carmine Infantino, Crisis Of Infinite Earths, Mark Waid, Geoff Johns and everybody else in terms of 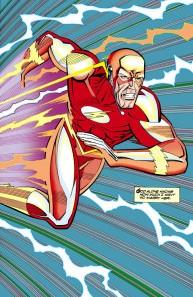 important creators or stories on the property, but in terms of Millar & Morrison’s time on the book, they are about as high up on the everybody else list as could be. Millar & Morrison are a great team on the book as they manage to capture the everyman style of Wally West that Mark Waid established with the high concepts that Morrison lives in. You can see the early stages of Mark Millar’s distinctive personality in his writing here with the dialogue and characterizations while the stories themselves are all Morrison. In fact, the series becomes more and more a Morrison book up to the final Human Race arc where Wally West is kidnapped by a large scale alien species to run a cosmic marathon for the fate of the earth with his imaginary friend from childhood. I can see the compulsion to read that and think “that’s not a Flash story,” which is dumb but common. In a lot of ways, Morrison’s time on The Flash touches on some similar themes that he approached on JLA & Animal Man in particular, but it’s always on the terms of The Flash. This is basically the genius of Morrison’s superhero work, he doesn’t try to fit the property into the high concept but instead understands the high concept of the property. It’s why he was able to resurrect Animal Man, why he did the definitive modern take on the X-Men & Superman, why his JLA is the blueprint for the game changing The Authority & The Ultimates, why he could kill Bruce Wayne and why Multiversity is the best DC comic of the last three years.
That vision and dynamic between the two gives way for a lot to like about the run. There is a great Mirror Master story that involves time going backwards, a heartfelt one-shot about Jay Garrick and an opening story about Wally West breaking his leg and optimizing the speed force into a wearable suit. As far as a Flash comic goes it rarely gets any better then this.

Cliff notes on the aftermath: Mark Millar and Grant Morrison had a falling out over writing credits on The Authority, a book that would make Millar a star comics creator. Millar would go on to be Marvel’s top writer for a period of time in architecting the company’s Ultimate’s line and top selling Civil War event before having his creator-owned comics become a massive Hollywood success’s with Wanted & Kick Ass, film adaptations that would eventually lead him to a leadership position within Fox’s film studios. Grant Morrison kept being Grant Morrison while the DC comics he called home moved their aesthetic further away from his sensibilities, and the man who understood superheroes best grew less interested in them.  Almost all the work that Morrison & Millar did together has been overshadowed by the comics they have done separate from one another. The prevailing consensus on Grant Morrison’s cannon seems to be his late 80s work on Animal & Doom Patrol, The Invisibles and basically all of his 2000s comics for better or worst, whereas anything that Millar wrote prior to The Authority is an anomaly. 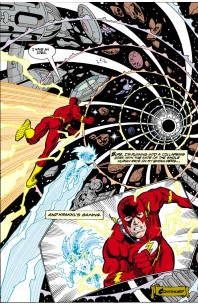 Nobody really talks about their collaborations together; it’s an after thought in what’s become a massive catalogue for both creators as is their run in 75 years of Flash stories. That’s a mistake because this is easily one of the best Flash comics I’ve ever read. It’s imaginative, enduring, exciting and thought provoking while staying true to the property’s ethos. But that’s all lost in the past and drowned out by the noise of comic feuds, Hollywood adaptations and major event books.Morrison & Millar don’t even seem to remember as the latter has a whole new take on the hero and the former fails to mention his time on the title in a two hour podcast covering his entire career. I remember, and you should too, because there’s a reason both writers are the two of the most influential creators in the medium and that’s evident in a sparse nine issues that showed Wally West run across the universe and back again to save earth by two comics writers that would start off trading story ideas in Scotland dive bars to rise to the top of their respected industry in opposition to one another. A muted cosmic epic lost in the very real tangled history of fame and fortune, blink and you’ll miss it.