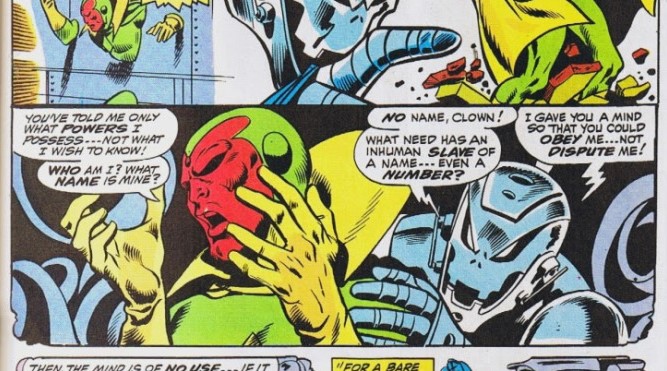 Ages of Ultron, The Beginning

After three years, a trio of solo films, and a seemingly endless parade of trailers, Marvel’s Avengers sequel finally arrives in theaters next week. Well, unless you live in Europe, Australia, much of Asia, South America and parts of Africa and the Middle East, in which case you get to see it this week. If you ever wanted a reminder of how unimportant American audiences are to blockbuster profits, remind yourself that this film opens in the Ukraine and Kazakhstan before its home country. Regardless of when it arrives at a theater near you, the Joss Whedon directed sequel will pit the Avengers against one of their most resilient foes: Ultron.

Ultron’s first appearance was in Avengers #54 (1968) by Roy Thomas and John Buscema. Ultron’s debut, though, is one of the most underwhelming for a high-caliber villain. The issue finds the Avengers tormented by a new rooster of Masters of Evil, who are taking orders from a mysterious Crimson Cowl. The Masters of Evil, working on intel sold to them by the Avengers butler Edwin Jarvis, invade Avengers Mansion. (It also seems that Whirlwind’s secret identity is The Wasp’s chauffer. Apparently, Hank Pym wasn’t big on background checks).

Having subdued the Avengers, a second Crimson Cowl appears and unmasks the first as a robot. (Cue off-panel comment, “that must be why he stayed seated all the time. I don’t know why, but I always assume these lines are spoken by Clint Barton). The robot’s head is instantly recognizable as Ultron’s distinctive visage. However, instead of lingering over this powerful menace, the story immediately moves past this silent prop to the real evil mastermind: Edwin Jarvis. OK, so back up here: Ultron gets less attention than Whirlwind and Jarvis is trying to destroy the Avengers? Good thing I was reading this in trade, so I could quickly move on to the explanation.

Issue #55 does sort out all of this. Ultron reappears as a full-functioning (i.e. standing) robot. Ultron had hypnotized Jarvis into betraying his allies. While Ultron’s motives remain undefined during this initial appearance, his contempt for humanity is obvious from the beginning. When Jarvis pleas with the Cowl to spare the Avengers “in the name of all that is human!, the Cowl becomes enraged. Pulling back his hood, Ultron reveals his true nature with the exclamation “What makes you think that I am human?? Soon he is gleefully knocking around Jarvis, while boasting that the butler “shall be the first human felled by the hand of—Ultron 5. This is a great dramatic moment, which is truly the first appearance of Ultron as readers know him. Eventually, the Avengers rally, with an assist from the new, nobler Black Knight, defeating the Masters of Evil. Ultron sneaks away, though, along with the reasons for his hatred of the Avengers.

After a one issue break for some time-foolery (really is there any character in the Marvel Universe who has not used Doctor Doom’s time machine?), Thomas revisits the villain. Onve again Ultron has chosen to work through a proxy. This time, though, it is one of his own creation: a nameless “Synthozoid This is the debut of The Vision, who sneaks into the Avengers Mansion, battling them until overcome by an intense pain.

The Vision is immediately an intriguing character. His brooding, synthetic nature is an appealing variation on Marvel’s template of misunderstood hero. He has been programed by his creator for one purpose, which is destroying the Avengers. Yet, at the same time, something within him rebels against that conditioning. Ultron gave him a mind of his own and thus the android is able to make his own choices. Or is he? He thinks that he is betraying Ultron by leading the Avengers to his creator’s hideout, only to be told that Ultron programed this weakness into him in order to lead them all into a trap. And yet Vision continues to shun Ultron, playing a pivotal role in the defeat and seeming destruction of this enemy of humanity.

These are fun stories, however, it remains odd how fractured this initial arc for Ultron is. Thomas waits until after the character’s defeat to provide an origin. Discovering the mystery of who was Ultron is at the heart of the iconic #58, “Even an Android Can Cry. In order to determine The Vision’s future status, the team tries to dig into his past, and in the process uncovers Ultron’s as well. Here is where Thomas first introduces the idea that Pym created Ultron as an experiment in robotics. Rapidly, the new life leaps through stages of development racing from “da-da to “dad to “father dear. Clearly Pym has engineered something which is evolving quicker than its creator can fathom. Part of this development is an immediate dislike for his father. It would appear that Artificial Intelligence also suffer from textbook Freudian neurosis.

It has been remarked that Ultron is a 20th Century reworking of Mary Shelley’s Frankenstein, wherein a scientific breakthrough turns on its creator. In his initial appearances, however, this comparison does not work. Frankenstein’s Creature was an innately good individual who is only driven to violence by the neglect and prejudice of others. He is forsaken by his creator, whereas Ultron turns against his before Pym even has a moment to take in what has happened. In Thomas’ worldview, characters are inherently good or evil, even the A.I. ones. Ultron’s hatred of humanity (which is not yet expressed in genocidal threats) is contrasted by the natural goodness of The Vision. He is truly a kind soul, who wishes to do good, which is why the Avengers ultimately decide to add him to their ranks. Meanwhile Ultron, for the time being at least, is left in ruined piecemeal, his lifeless head a child’s toy. Thomas quotes from Percy Shelley’s famous poem “Ozymandias, underlying the folly of Ultron’s desire to conquer humanity.

Next week, I shall be discussing how some later writers have used Ultron.