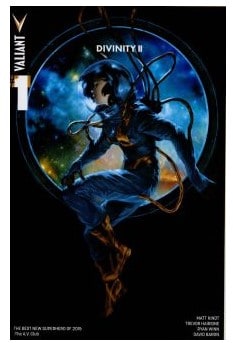 One of the most satisfying elements of the Valiant revival is how naturally Matt Kindt has settled into their larger universe. While he had his successes with work for hire projects at The Big Two (Frankenstein Agent of S.H.A.D.E. or Marvel Knights Spider-Man), he never seemed to find his place in the companies in the same manner indie creators like Kieron Gillen or Jonathan Hickman had before him. Valiant, though, has proven much more receptive to his talents allowing Kindt to place his own distinct stamp on properties such as Ninjak. His Divinity mini-series read like a creator-owned book which happened to take place in a larger shared universe. Since then, readers have watched the character more fully integrated into Valiant, particularly having a major presence in an arc of Imperium. On Wednesday, Valiant launched a sequel to last year’s mini-series, which continues the strong storytelling of the original.

Other companies may have taken the opportunity to double-down on the links tying Divinity to other series, but, at least in the debut chapter, Kindt skips this route. Indeed, except for flashback cameos, Abram (aka Divinity) himself, does not appear. Instead, Kindt shifts the focus to his comrade cosmonauts. The premise of Divinity was that at the height of the Space Race the Soviet Union was able to launch three astronauts into deep space. Once out in deep space there was an accident (typical, right?) granting Abram extraordinary cosmic powers. Divinity chronicled his return to Earth in the present day and his attempt at adjustment. Divinity II promises to do the same with his comrade Valentina, if along a rather different path.

Abram left, in their eyes abandoned, his comrades in rather precarious circumstances. As the issue opens Valentina and Kazmir are stranded on a strange alien planet. Kazmir is wounded, raving about his hidden love for Valentina. Valentina remains distant. Readers are given glimpses of her childhood, which began as a street urchin and in a sense did not get much warmer even after she was adopted. Her foster mother dies and her father is more interested in her as a behavioral guinea pig than anything else. Life for Valentina has always consisted of struggle in one form or another, so that when she enters the training program for cosmonauts, it is simply another maze for Myshka (the “little mouse) to run.

Kindt does an excellent job laying out Valentina’s character in a compelling manner. Her background renders her sympathetic, even if the reader does not entirely agree with the cold-heartedness of her disposition. Mirroring Abram, she too makes contact with “the unknown reaping incredible abilities. However, her journey home is not driven by a desire to reunite with loved ones as it was for Abram. She never had any to miss in the first place. Her devotion was towards the Soviet State, an ideology which has long since crumbled into dust. Or do traces of the old authoritative hand still remain? As with Joshua Dysart in Imperium, Kindt does not shy away from using current political figures in his series. Watching how the sensibilities of Vladimir and Valentina may or may not align should prove fascinating.

Also returning for the sequel is Divinity penciler Trevor Hairsine. His work for the first series was a career highlight which he outdoes with the latest chapter. His sketchy style serves the heightened drama of the story conveying both Valentina’s raw power and the raw emotion behind it. He lends the marooned space scenes a surreal quality, highlighting the otherworldly nature of the situation. This feeling is reinforced by David Baron’s psychedelic palette, which favors pinks and purples. Together Hairsine and Baron craft a compelling alien terrain.

All in all, Divinity II gets off to a strong start and promises to be another worthy addition to Kindt’s growing body of work for Valiant.

Review of Bug! The Adventures of Forager #1 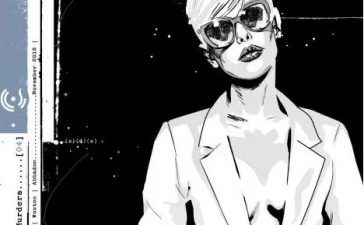 Review of The Black Monday Murders #4