Review of Bug! The Adventures of Forager #1 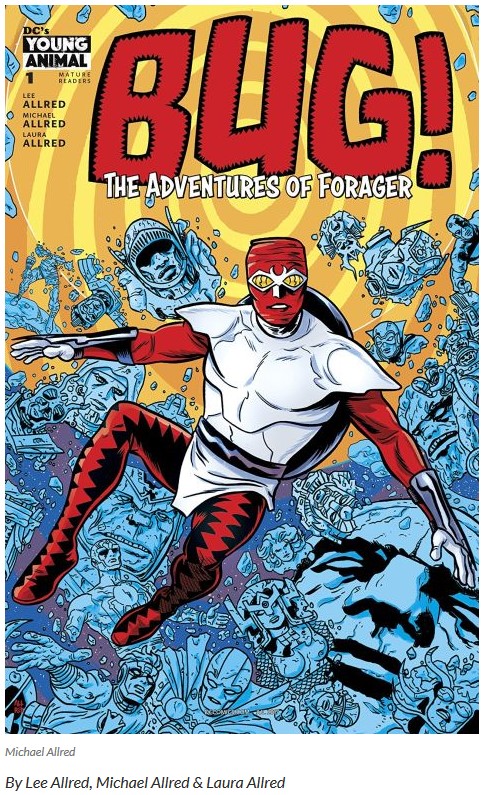 The old met the new on Wednesday as DC’s ongoing celebration of Jack Kirby’s centennial crossed paths with the publisher’s newest imprint, Young Animal. This blending of sensibilities is not novel for Young Animal; Shade the Changing Girl is a homage to both Steve Ditko’s original stories along Peter Milligrin and Chris Bachalo’s iconic 90s take for Vertigo. In this case, Bug! The Adventures of Forager is a new limited series centered on a minor player from Jack Kirby’s sprawling New Gods cosmology. Forager is a member of a race of humanoid creatures called bugs which compose the working class of New Genesis. They are viewed, often dismissively, as nameless, interchangeable laborers in the machinery of New Genesis. Forager, however, feels the tug of independence, a sensation reinforced by the suggestion that his destiny lies above, not below, the surface. The opening page of Bug! relates this background information in a succinct manner while also delightfully establishing the series’ idiosyncratic tone.

The comic opens with Forager asking “Why am I not like the others?” Forager is confused by these strange emotions of individuality, wishing for the simpler perspective of his fellow workers. Artist Michael Allred illustrates Forager’s inner turmoil with a series of close-cropped panels, creating a cramped ambiance which mirrors Forager’s confusion. This sensation is heightened through the use of alternating black panels which suggest gaps in Forager’s memory. Events flash by the reader’s eyes: a confrontation with Orion, Batman knocking out Orion (with just one punch?) and Forager’s heroic actions. Through the use of such stark snapshots, Michael Allred, along with writer Lee Allred, convey exposition in a tense, engaging manner while also announcing the oft-kilter tone of their series. Indeed, it is only after the first page that things start truly getting weird.

Forager wakes up sunk deep within a gooey cocoon. Once he fights his way free he discovers himself in a . . . perfectly ordinary basement. The room appears to be a type of storage facility, full of odds and ends such as a snare drum, Christmas card and mannequin limbs. Forager reflects on how Metron would evaluate the situation (“science, blah, blah, blah”) and concludes that the New Gods, not knowing what else to do with his body, stashed it away for the time being. Just as Forager is beginning to get a hold of the situation, he meets a child ghost, troublesome monsters and a philosophical teddy bear.

As this summery suggests, there is a strong current of absurdism flowing through these pages. There is a looseness to Lee Allred’s script which lends the narrative an anything could happen vibe. Yet, as events grow increasingly surreal, Lee Allred never loses sight of his story’s emotional core; the internal dilemma glimpsed in the opening page reoccurs throughout the issue. It is most prominently addressed in a conversation Forager and the teddy bear have on the subject of free will. The teddy bear observes that simply rebelling for the sake of rebelling is its own form of prison. The hero Orion is as confined by his hatred for Darkseid as any Parademon is by its blind devotion to the tyrant. At the same time, Lee Allred keeps the beats breezy with puns. This tone carries over to Michael Allred’s art which illustrates one of the teddy bear’s observation with the image of New Gods tipping over, like dominoes, blindly following the instructions of Highfather. These panels mirror the elaborate domino relay with which the ghost girl is filling the room. Michael Allred plays up the ridiculous side of the scenario with his adorably blank faced stuffed animal. He is assisted in this approach by Laura Allred’s bright, energetic coloring. Balancing serious and satirical can be tricky; often one tone ends up undercutting the other. What is so impressive about Bug! is how well Lee and Michael Allred blend these two sensibilities.

One of the defining hallmarks of Kirby’s late period career is a sense of anything goes. Series such as Kamandi gleefully leaped from one outrageous scenario to another, constantly reveling in the fantastical, while also lacing in some social satire along the way. Lee and Michael Allred successfully channel this rambunctious spirit for Bug!. Mid-way through the comic, the dominoes start tipping over and doors are flung open to broader canvases which include more characters from Kirby’s time at DC. Through it all, Michael Allred keeps his spirited art flowing, fully embracing the script’s oddities. This is a comic that both follows its own rules yet feels entirely logical. In such a way, it is a lively romp and fitting tribute for Kirby, The King of Comics.