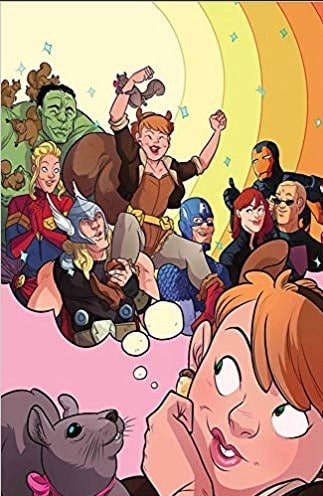 Let’s play pretend for a minute. Imagine a world in which Squirrel Girl did not exist. Other than making for a much sadder living experience, this week would have been nearly impossible for me to choose my favorite issue. From a strong trio of Converge titles with Hawkman, Legion of Superheroes, and The Flash to the always brilliant Image books such as Invisible Republic and Kaptara to other Marvel favorites like Star Wars and Black Widow, this was a great week in comics. However, when choosing the finest book, a great week makes things all the more difficult. Thankfully, Ryan North and Erica Henderson’s Squirrel Girl came back with issue four, perfectly drawing to a close their first arc and providing with my unequivocal choice.

The story is rather simple: Galactus is on his way to devour Earth, and it is up to Squirrel Girl and her trust rodent sidekick Tippy to stop him. The battleground? The moon. Method? Not even Doreen knows for sure. Apparently, this is not the first time Doreen has taken on a godlike being (for more details on her showdown with Thanos, ask someone who knows non – X-men Marvel continuity, because this guy has no clue), but just how she was going to defeat him was something I was skeptical of. Starting at the end, we see Doreen standing over Galactus’ body while taking a selfie. But how did she do it? How did she win? Of course, the issue then goes back to show how it all went down. North’s crafting of the time line may not be the most original but it sure as hell works well with the story, leaving us guessing for just a moment longer.
And that is what North does so perfectly: pacing. He knows when to reveal, when to drop a joke, when to beat the heart, and all of those are well represented in this issue.
So clearly, this was no a false alarm. Galactus was indeed on his way, again, to gobble up the earth. Now wise to the ways of the planet’s mightiest heroes, Galactus dismisses the herald. Why allow Iron Man, Thor, or even SG a chance to foil his dinner plans by sending the Silver Surfer to hold the table? In fact, his only warning was delivered via his social media account; however, since he has no followers, no one saw the post. Yet, despite all odds and thanks to some stolen Stark tech, Doreen is prepared to 86 the pale blue dot. Her hand to hand tactics are not exactly of the caliber required to do more than perhaps polish his armor. Back to the drawing board.
This is by far the most interesting I’ve ever seen the man in purple. This Galactus calls Thanos a tool and himself “Dude,” while waxing on how the English language lacks a gender neutral, singular third person pronoun. This is the Galactus we see when peering through the looking glass. We even get an explanation for why he has never actually devoured the Earth. Doreen deduces that he knows that if he comes looking to eat their earth, the heroes are bound to find him a replacement world to eat. Coming to Earth is the equivalent of popping up to the Burger King drive thru: obviously, it’s not what you want to eat, but at least it’ll fill you up. So, naturally, Squirrel Girl finds the replacement lunch. I’ll leave where she takes him a secret, but you’d be NUTS to think it was anything but the perfect choice for this series. (See what I did there? Of course you did.) Belly full, Galactus stretches out back on the moon and slips into his food coma, allowing Doreen to snap the selfie, and bringing the issue full circle.
Henderson’s art continues to deliver that special cartoon flavor, blending well with North’s playful storytelling. Sometimes a team just seems to perfectly click, and this is one of them. There’d be no Squirrel Girl without both of these wonderful creators, and, like we learned during pretend time, that is not a world we want to inhabit.

P.S. That page with Squirrel Girl sitting on Galactus’ shoulder as the stare off at the Earth from atop the moon is spectacularly adorable. At least, it is until you realize Galactus is wondering if he wants it deep-fried or oven-baked.