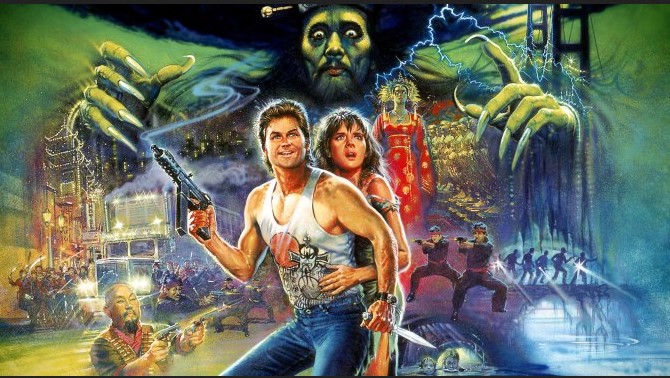 Big Trouble in an 80’s Remake

I was at my peak wrestling watching days when The Rock exploded onto the scene. He was my favourite wrestler and this carried over into enjoying most of his films as an adult. I am a fan of Dwayne Johnson in the right role. In saying all this, I am horrified at the thought of this remake. Please don’t ruin my childhood, Dwayne.

Play your cards right…you live to talk about it

Big Trouble In Little China did not do well at the Box Office. IMDB reports that with an estimated cost of $25 million, it hit the big screens July 2, 1986 and made under 3 million during opening week. However, it has since gained a huge following and become a cult classic. So what is it that makes this movie so loveable? The answer is the 80s. This is a classic 80s action flick. With a fearless yet non threatening leading man, who has more one liners than Rodney Dangerfield. The movie has fantastic hand to hand combat, over the top cheesy dialogue, loveable characters and Chinese Black Magic. However, it does flirt with the line of being so bad that it is good. It is almost a terrible movie, but in my opinion has just the right amount of, “I was born ready!” to make me laugh, instead of roll my eyes.

Kurt Russell is the perfect fit for Jack Burton. An arrogant truck driver who can’t wait to run his mouth about something. You don’t have to guess who the leading man of this story is, Jack Burton lets you know right away. I cannot imagine anyone else delivering the lines he does without completely changing the tone of the movie. A hero who is so far out of his comfort zone that he is essentially non threatening.
However, Jack Burton will do anything for his truck.

Why the recent comic is great

It’s all in the reflexes

If you know nothing about the movie, please do not go pick up this comic and tell me it is terrible. I assure you, it will be terrible. The reason the comic book works is because of the movie. The Big Trouble In Little China movie ends on a big cliffhanger, however with bombing at the box office and then the following it received later, a sequel would not make much sense. But a comic book is a perfect medium to explore more of this story. The comic book is even more over the top than the movie. Telling the same style jokes, with even more goofy plot lines. The jokes hit hard with nostalgia and the action sequences flow with 80s grace. This could only work as a comic, because it is paying tribute to the movie. I can hear everyone’s voice in my head, from Jack to Wang and even Egg. If you enjoy the movie I would recommend the comic. It is a lot of fun and I think the only way this story could have continued on.

Why Dwayne “The Rock” Johnson is great

Know your role and shut your mouth

Dwayne Johnson is one of the most charismatic men in show business. There is a reason he is called the people’s champion. Fans of wrestling love The Rock. Even more so, fans of big muscles love The Rock. I will watch a lot of movies Dwayne comes out with and I have learned this, he can make some really good movies when he knows his role. The big tough dumb guy role definitely has its place with movies like The Other Guys and Get Smart. Also he can bring it home in movies where his ever impressive frame needs to be put to work, such movies as Faster, The Rundown and The Fast and The Furious franchise. What a movie never needs is The Rock. We don’t need the over dramatic arrogant asshole. We were given that with wrestling and that is where it should stay.

Why the remake will bomb 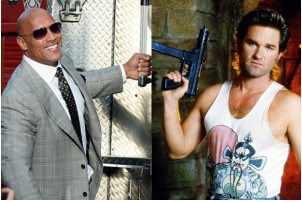 I do not even know where to start. Dwayne Johnson has already played Jack Burton. His name was The Rock. An arrogant prick who is full of one liners. A guy who doesn’t care about anything but himself and will entertain the pants off you whether he fails or succeeds. So this should be a perfect fit right? WRONG! Big Trouble In Little China is on the boarder line of terrible. It flirts with that line so well that it is actually extremely good. We don’t expect the lines that come out of Jack Burton to come from Kurt Russell. It is this mystery and surprise that keep us laughing with every “You know what Jack Burton says at a time like this…” Just picture The Rock saying, “It’s all in the reflexes”. I actually cringe thinking of it. Even worse, what if he said, “It’s all in the eyebrows” and then looks at the camera? I would probably throw up. Even though Kurt Russell was pretty jacked 😉 for this role he is very awkward and unassuming making phrases like, “Everybody relax, I’m here” gut bustingly (add to dictionary) funny. If Dwayne Johnson comes into a scene and says, “Everybody relax, I’m here” I actually relax. Who could take that tank out? The guy is literally made of steel and tungsten (note to self, look up the meaning of literally). I think a remake could bomb big time and potentially do damage to the original, turning it into a joke. I see only too options, the remake takes itself too seriously and comes across as a fluff movie, or it takes itself as a joke and comes across as stupid and insulting to the original. I just cannot see Dwayne Johnson as my childhood idol Jack Burton. I don’t get it. But, as David Lopan says, “You are not brought upon this world to get it!” So instead I will suck it up, because guess what? If I don’t want my childhood ruined, then I can just choose not to watch the movie. Isn’t that great news! 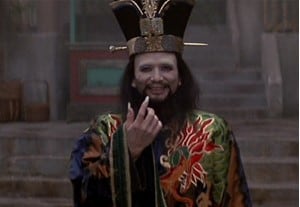