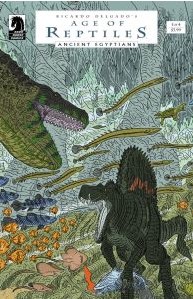 Comics, like movies, are a visual media. They are a form of storytelling intimately tied to images. Words alone will never suffice, they must be illustrated in some fashion. This is one of the reasons I love silent film as much as I do: it gets to the heart of cinema’s uniqueness, telling a story through moving pictures in the way that only it can. Comics are capable of something similar, as my colleague Dean has discussed previously. Free the images from the limitations of words, and watch a whole new visual language develop.

These thoughts passed through my mind as I read the first issue of Ricardo Delgado’s new Age of Reptiles series. Set in the pre-historic period, it abandons all written language in order to fully immerse the reader in the world of dinosaurs. A more traditional creator would have employed some type of narration, or at the very least, provided occasional text boxes to clue readers into the time and place. Delgado avoids even the latter, giving no context beyond the series subtitle: Ancient Egyptians. In theory this might sound intimidating, but in practice it is quite thrilling.

The comic centers on a green dinosaur and his search for food during the day and shelter at night. He walks through overgrowth, wades through water and confronts beasts much larger than himself. Delgado’s page layouts instantly create a steady rhythm, making the action easy to follow from panel to panel. Each image is teeming with atmosphere. Delgado leaves out the sound effects, which only heightens the power of his pictures. For example, a herd of stampeding animals speaks for itself, evoking the sounds of frenzied movement, splashing water, the hissing of both predator and prey. In addition, he is able to give the dinosaurs immediately recognizable facial expressions without a hint anthropomorphizing them. The results are quite captivating from the first panel until the last. This is a comic full of awe-inspiring images.

At the same time, Delgado uses his story to remind readers of the centrality of the struggle for survival. Pretty much all the actions in this issue are defined by the quest for food—either to gain it or to avoid becoming it. It is a harsh, vicious world. Yet, at the same time, there is an interaction towards the end which almost suggests the idea of respect between predator and prey. Does one animal spare the life of another? Or is it simply my wish to read my own human emotions into the unfeeling eyes of a carnivore? Is there nothing else behind that gaze than (as Warner Herzog once remarked of bears) the cold desire for food? Such questions lend Age of Reptiles an intriguing subtext.

Altogether this is an exceptionally compelling comic book, which demonstrates the power of images. I was not familiar with Delgado’s work before reading this issue, but shall definitely be searching out more of it in the future. And of course looking forward to the next installment of Age of Reptiles.