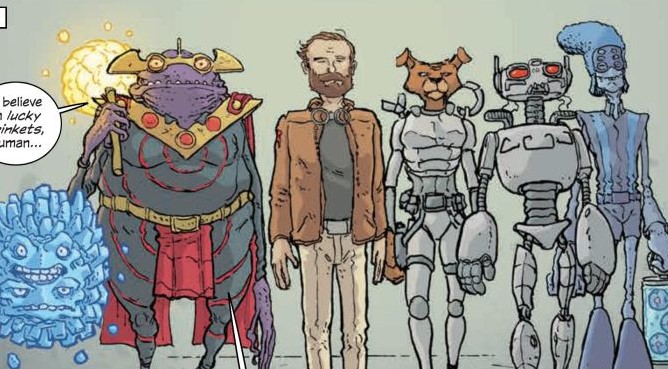 “Nick and I always knew that when the comic got to a certain point we would be changing format, as Manhattan Projects was always intended to eventually be a book where we could tell any kind of story – in any genre – we wanted. We were also aware that doing so would mean that we would be changing the entire structure narrative that moves each individual character’s story incrementally along, and replacing that will be tight arcs focusing on a single (or few) characters.” – Jonathan Hickman

Jonathan Hickman and Nick Pitarra spent 25 issues building a fictitious world filled with historical characters behaving in unpredictable ways. Manhattan Projects became a huge hit for Hickman, Pitarra and Image Comics over the last few years. The anticipation of what these scientists would do next and the top secret underground world they operated in was enough to draw in readers of all genre’s. Manhattan Projects was a science fiction book I suppose, but it had many other elements beneath the surface. It took 25 issues to introduce it’s very large cast of characters while grounding us in a familiar yet clearly fictitious world. Nick and Jonathan have done exactly what they set out to do. They created their own universe in which to tell any genre of story, with a cast of a dozen characters to spin off. That’s an incredible feat if you think about it. This year, 2015, marks their first time testing the MPU (Manhattan Projects Universe) with their spin off series, The Sun Beyond The Stars.

There were only three issues to come out in 2015 but the quality is second to none. As great as Manhattan Projects was, don’t for a second think that it lost anything now that the narrative structure is changed. In fact, I would argue that these three issues rival any three of the strongest from the original series.

The Sun Beyond The Stars focuses on Yuri and Laika. The space man and his space dog. Yuri has been searching the galaxy for Laika, he just wants to be with his best friend, while Laika has grown some thick skin living in space. If she was happy when Yuri eventually stumbled upon her, then she has a funny way of showing it. The story of a broken man searching for his dog, takes an unexpected tonal shift when she welcomes him not with a warm embrace, but instead a spiteful fist. The awkward conversations between Yuri and Laika is spot on. Right when we expect the warm fuzzies Hickman hits us with the cold realities. There has been some criticism that Hickman is a very cold writer, that he doesn’t inject enough emotion into his characters. Perhaps he is simply just a science nerd, disconnected from the social world. Or maybe he is in fact a robot himself, programmed to follow a set of script writing rules. Well, you can try and sell that garbage to someone else. There is no greater proof of Hickman’s characterization ability then with  The Sun Beyond The Stars. Hickman starts with the two space cadets and adds a number of fantastic aliens to the mix. I think Hickman just might be the best at writing quirky aliens. He is able to find the humor in a specific character traits and work it from all the right angles. This band of cmisfits contain a few of my favorite new characters of 2015. 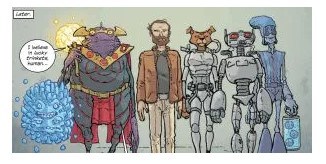 From left to right:

Rys – Floating blue blob with two faces. Both mouths only say the word Blarg for 2 and a half issues, until he decides to just start speaking English. When faced with the shocked face of Yuri saying, “You can talk?” he responds with, “Of course I can talk. I’m a floating head with two mouths. Why wouldn’t you think at least one of them would be able to communicate properly? …Most of you seem pretty dumb and not worth a real conversation. Plus, why should I be accommodating when you haven’t bothered to try and learn my language.” Yuri is shut down but the floating head while Hickman teaches us to not judge a floating head by the number of it’s mouths. Hickman waits for just the right amount of time before setting up this deadpan delivery from Rys that has me laughing out loud.

Judge Ryleth the Hammer – The adrenaline craving judge who thrives off any situation that involves bringing a small time criminal to death. He has a very shaky moral compass, basically deciding as he goes along what crimes are worth prosecuting. You may get away with murder one day and be on death row for trespassing the next. When Ryleth decides you have broken the law, your life is in serious danger. They don’t call him the Hammer for nothing. A very hilarious self aware judge who likes to keep law breakers on their toes, never knowing what they can or can’t get away with. The best way to make sure criminals don’t cross the line is to make that line blurry.

Yuri – From the original Manhattan Projects series. In a historical sense he was the first human to enter space in 1961, although I don’t think he went quite this deep into space. The man is on a mission. He is doing basically whatever it takes to find his “lost in space” dog Laika. What is a man without his best friend? Just a Russian astronaut looking for a place to park his ship.

Laika – From the original Manhattan Projects series. In a historical sense she is the first animal to enter space in 1957. A stray from the streets of Moscow was sent in a space craft to orbit the Earth, with no expectation of survival. She did in fact die on the trip, in reality. So yeah, if I was her I would be super pissed when I saw Yuri too. Bunch of Soviet bastards sending a stray dog to survive in space without enough oxygen. The chip on her shoulder in this spin off series is well deserved.

UNa – A compulsive lying robot. He claims that it is impossible for him to lie due to his programming, this is of course a lie. UNa is one of my favorite characters. His lies are so outlandish it is impossible not to love him. UNa has the best exchange of the series with Primor, the grey Sionnu standing beside him. Primor is trying to get UNa to pilot the Nebula Left to get back to the Sionnu Science Council Homeworld for some good old fashion revenge. Primor tells UNa that negotiating is beneath him so just present the best offer and that will do. UNa, the compulsive liar, answers with, “Okay. It’s gonna take one hundred and fifty-seven quadrillion credits to do the job.” Primor pauses and responds, “I was thinking less.” UNa creates many of these humorous moments with his ridiculous lies, whether it is calculating a simple addition incorrectly or claiming there is only one crystal key to a hyperspace gateway in the entire universe, when really there are hundreds of thousands out there. I’m sure glad they need his money to get around because you can be assured that everyone hates this guy.

Primor – The driver of the plot. A grey class of Sionnu, which is the slave class, has murdered everyone who calls themselves his master and he isn’t done yet. Primor is on a mission to go to the homeland of the Science Council where he will destroy the world of red Sionnu’s and get his revenge. I find it interesting that the Sionnu are classed based on color. A not so subtle commentary from Hickman, appropriate for the 1960’s.

This group of six characters are a blast to read each issue. They fit together so terribly it makes for a really fun ride. While Hickman makes each of their unique personalities shine Pitarra brings the wacky alien species to life. No two species look the same. There are several scenes where there are multiple alien species in one room. The detail in these panels and the imagination burst off the page as you can’t help but scan each and every character on the page. The panel progression from Pitarra gives this spin off more of a cinematic feel than the original series. The different angles of each conversation set the room up for the punchline while the different cut shots in action sequences highlight the fast paced exciting story. 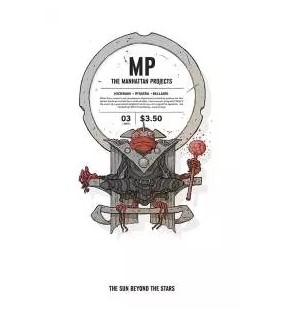 The Sun Beyond The Stars is not your familiar Manhattan Projects but it is something greater. It is a goofy science fiction book, taking the best quirky alien scenes from The Manhattan Projects and turning it into a series. Those scenes were always my favorite part of The Manhattan Projects. Contrary to what Laika has to say, space isn’t depressing, space is hilarious. Even though this is the shortest page total you will see on my year’s finest list, it was one of my favorite books of 2015. Hickman and Pitarra have set us up for many many years of Manhattan Projects. What they have done with this comic book is an incredible accomplishment. I know we are all holding our breath for the dimension traveling Einstein series, who knows what 2016 will hold!