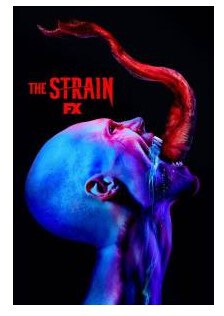 With the hit FX series The Strain returning in the summer, I thought it would be fitting to look back at one of the co-creators, Guillermo Del Toro, previous works and how they led to The Strain‘s existence…

Those that follow comics writers will know that many like to repeat certain tropes/themes/arcs in their stories, and this holds true to print novels and films. Guillermo Del Toro, having written for most of these, is no exception. Most of his works have a horror bent, ancient mythology plays a role, and he tends to favor using practical special effects and less CGI. He also has a recurring interest in vampires, and infectious bites.

In 2004, Del Toro was hired in his first American film to direct the sequel to Blade starring the titular vampire hunter. The vampires in the Blade series typically are pale, super strong, fast, and human in appearance except for having fangs. They have the same vulnerabilities normally associated with vampires (garlic, sunlight, silver, thirst for blood) except for holy water and religious totems. In Blade 2, a new breed of vampires appears that is stronger and feeds on both humans and regular vampires. They are immune to garlic and silver, have more enhanced bite, and “turn” and feed much quicker. 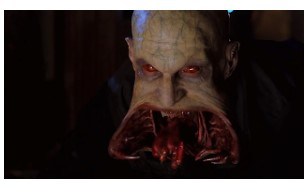 This turns out to be an intentional evolutionary jump by a Vampire ruler to dominant the Human Race, by way of a viral serum. 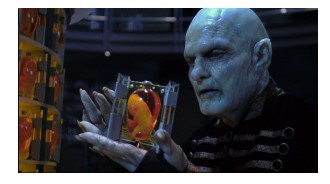 Already Blade 2 and the Strain have much in common in portraying vampires, but there’s a piece missing. How effective is the vampire bite on the neck? It involves them chasing their prey, fighting them to submission, and some process or ritual in order to “turn them.” What if the delivery method for the vampire curse was more virulent, more assured? What if it was literally a virus?

Also in 2004, Del Toro wrote and directed Hellboy. In that, he takes the frog monsters of the first story arc of the comic and revamped them as an ancient race of demons that use a tentacle tongue to inject eggs into prey, and can resurrect  themselves as long as there are eggs somewhere to hatch.

Here is a rough concept for the throat stinger of the Strigoi from The Strain. An interesting delivery system, and a more dangerous monster to fight if it can infect you from a distance.

With the Strigoi, “blood worms” that carry the virus are injected from a muscular stinger to victims. The worms also reside throughout a Strigoi’s body, and can burrow into a person’s bare flesh and quickly reproduce asexually. Cutting out the worms from an infected person is not effective, and often fails to succeed. The Strigoi of The Strain are vulnerable to UV light, pure metallic Silver, and sunlight. After a painful flu-like metamorphasis, the turned lose their hair, ears, nose, and reproductive organs to become Strigo.

They are controlled through a psychic link by a central figure who plans to dominant the human race by spreading a vampiric virus across the world.

It’s interesting to see Del Toro’s earlier work show ideas that would later form the foundation for a hit TV show, novels, and comic books. With the Strain those ideas take center stage and even surpass his previous works, which isn’t surprising since Del Toro, along with Chuck Hogan, were able to build a property from the ground up.