Reevaluating Sword of the Atom 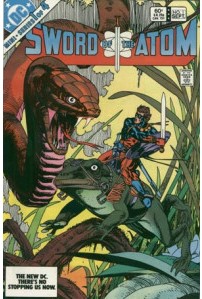 In 1983, Ray Palmer’s life went through a bit of an upheaval. His adventures as the super-powered, shrinking hero Atom was taking a toll on his marriage to Jean Loring. Not helping was the fact that he was spending most of his non-spandex time holed up in his lab performing experiments. Then one night, Jean and him have a particularly searing argument (the details of which will be discussed below), resulting in a temporary separation between the spouses. Thus, Ray leaves his home and flies out to Brazil where he hopes to investigate possible white dwarf material, the same substance which is the source of his powers. As his luck would have it, however, he stumbles upon a coca plantation instead. There is a struggle and the private plane carrying Ray Palmer crashes deep in the Amazon Rainforest.

This is more or less set-up for the 1983 limited series Sword of the Atom by Jan Strnad and Gil Kane. In the aftermath of the crash, Ray finds his suit badly damaged, and along with it his ability to restore his normal size. He is not only lost in unfamiliar, deadly terrain, but stuck at a height of 6 inches. Then, a huge snake slithers into sight. The situation appears pretty dire for Ray until suddenly the snake is driven off by a group of yellow-skinned, 6 inch people speaking a foreign tongue. Ray had set out to find star substances fallen from space only to discover instead an alien race living deep in the jungle.

What follows is a mostly entertaining blending of fantasy and super heroics. Ray sides with a rebel force seeking to overthrow their cruel king Caellich. Caellich, however, is not inherently vicious, but has been manipulated into such a role by his advisor Deraegis. Meanwhile, Deraegis covets the throne for himself. So convincing has been Degaegis’ smearing of the king, even Caellich’s own daughter, Laethwyn, has turned against him. Laethwyn had been in love with one of the rebellion’s leaders, yet, after his death, finds herself swooning in the arms of their new commander: the Atom. Ray, for his part, is equally smitten.

Strnad is a pro at juggling all of this exposition, allowing the story to flow clearly, if a little predictably at times. As I said, it does fall victim to some standard tropes of the genres, such as the princess in distress waiting for the stranger to save her kingdom. At the same time, Strnad and Kane do a good job revitalizing the story with unique features of the Morlaidhan civilization. The most memorable of these are the Morlaidhan’s signature choice of mount: frogs. At first glance goofy, these beasts are looking pretty spry and efficient by the end of the story. Indeed, Kane’s art is strong throughout the series.

However, despite these strengths, there was one aspect of Sword of the Atom, which kept nagging at me as I read it: gender roles. Comics have had a long, complicated relationship with female characters stretching back to The Golden Age, where readers could find examples of the positive side by side with the terrible. As the medium matured, so did their take on the “fairer sex.” Just two years prior to Sword of the Atom, Frank Miller unveiled Elektra, who both broke and conformed to traditional expectations for female characters.

At times, it feels as though Strnad is trying to bring a new degree of naturalism to the dynamic of Ray and Jean’s marriage. The spark of their argument in #1 is Ray catching Jean in the arms of another man. Instead of using this as an excuse to paint Jean in terms of some insensitive hussy, Strnad lets Jean speak her mind. He presents sympathetically her list of grievances with Ray. She feels that her husband is never there for her. Even when he is not off gallivanting with the Justice League, he is locked up in his lab. He has neglected to leave any spare room in his life for her. Under such circumstances, can he really blame her for seeking emotional support elsewhere?

Later, in the Sword of the Atom Special which followed the mini-series, Ray and Jean have another calmer conversation. They sit at their old college make-out spot, wondering what the future could hold for them as a couple. They realize now that despite good times of the past, they have grown into different people, who no longer want the same thing from life. Jean cannot expect Ray to be content as the husband of a small town lawyer any more than Jean should be satisfied with being the wife of a superhero. Jean is never faulted for being a driven career woman with a professional life of her own. However, that only reinforces how Ray and she deserve partners more suited to their lifestyles. It is a mature dialogue, with which, if you remove the spandex, many an adult couple could relate. It is also probably the most sympathetic moment that DC has ever given Jean (who has definitely not been treated well by the company on other occasions).

At other times, though, Strnad plays right into standard gender stereotypes. While Jean’s affair is given context that does not change the fact that it is her infidelity which drives Ray from her arms and into the Amazon wilderness. Yet, when Ray takes up with the exotic princess, he gives little indication that he is concerned about how Jean might feel about any of this. He does stop to consider if they are being disrespectful to Laethwyn’s recently deceased lover. One short carpe diem speech from the princess is enough to convince Ray that all is good. It would seem that the double-standard of wife adultery/deceitful, husband adultery/invigorating remains firmly in place.

This leads into the series biggest problem: Laethwyn herself. Strnad tries to position her as part of the rebel fighting force, bravely resisting tyranny. At one point, she is shown riding into battle alongside the Atom. Only problem is she is never depicted doing much actual combat. Maybe a sword swoosh once or twice. For the most part, she hangs back and lets the men do all the work. (This is as good a time as any to observe that Laethwyn is the only female Modlaidhan to appear outside of crowd scenes). The most embarrassing moment comes at the climax of #4. Fearing for the Atom’s life, Laethwyn rushes forward to help him. Her way is blocked by the rebel lieutenant Voss, who literally knocks her unconscious with a single slap. She is then carried off for her “safety.” Elektra Natchios she definitely is not. Oh, and did I mention that she wears even less clothing than Elektra does? (I’m still unsure what keeps the top half of Laethwyn’s outfit in place). Finally, if you look at the covers which include the princess, she is always cowering behind the Atom’s protective figure. Hardly an assertive, independent figure.

All of this results in a rather mixed message as far as male/female relationships go. Yes, Strnad does attempt something more sophisticated than a black and white blame game, yet he undermines that with a very dated female character. It is a shame, as otherwise, this was an enjoyable adventure series.