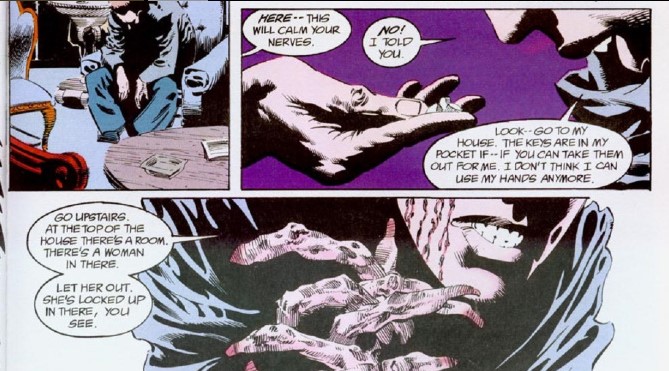 It probably came as no surprise to long-time readers that I recently selected Neil Gaiman’s Sandman as my favorite comic series. I have written enthusiastically about the series in the past, as well as covered the latest addition to The Endless mythos: Sandman Overture. This Wednesday, Gaiman and artist J.H. Williams III bring Overture to an end. In anticipation of this event, I thought that I would revisit some of the most memorable moments from the original series. Gaiman was lucky to work with a wide variety of artistic talent for Sandman; together they created many of the most striking and poignant images in the medium.

NB: I have limited myself to the original 75 issue series. Thus, nothing from either Death limited series or the various additional takes, including Overture, which Gaiman has scripted since “The Tempest.”

Also entries are listed in the order in which they were published. The list does contain spoilers, as it would have been pretty impossible to include The Kindly Ones or The Wake otherwise . . .

Dream engages in a verbal duel with one of Hell’s demons in order to win back his helm. His final implication that hope may even survive an annihilating supernova is a powerful statement, especially when paired with his later observation “What power would Hell have if [its inhabitants] were not able to dream of Heaven?” For this Infernal sequence Sam Kieth handed in the best art of his short run.

Simply one of the most heart-breaking pages in comics. The simplicity of the baby and Death’s exchange gets me every time . . . 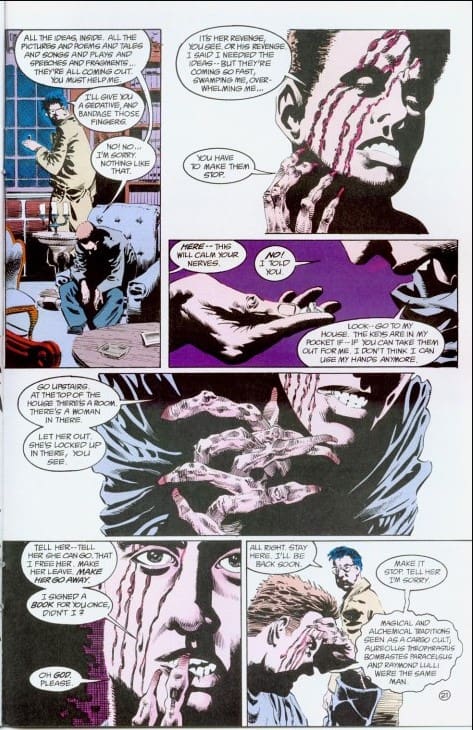 What writer doesn’t want endless ideas? Well, Gaiman took that concept and with Jones’ able assistance gave it a horrific twist. Yes, the guy completely had it coming, but still, pretty searing stuff, especially if you read it for the first time as teenager dreaming of a literary career yourself .  . .

“I think maybe it’s hunting something” from Sandman #18

The conceit of “Dream of a Thousand Cats” was that once cats ruled the planet and people were merely mouse sized prey. Then one night a thousand humans dreamed of a different order and so it came to pass. Thus a cat wanders from town to town imploring her fellow felines to dream the world right again. It would only take a thousand of them. So, yes, that kitten is dreaming of a hunt, but it is definitely not rodents which are clasped between its paws . . .

“And how could anyone own a soul?” from Sandman #23

In this philosophical sequence, Lucifer takes Dream on a tour through Hell. The twist is that Lucifer is expelling all of Hell’s inhabitants. None of them were held prisoner by anyone other than themselves. Lucifer is sick of being humanity’s scapegoat for all that ails the world; it is time for them to take responsibility for their own lives. They were the ones to blame, never him . . . 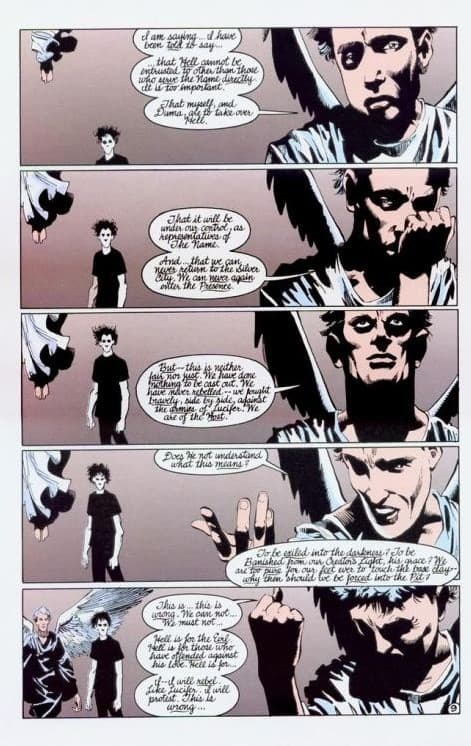 One theme which reoccurs throughout the series is Gaiman’s fascination with dualism. For example, each of The Endless actually serve two mutually entwined functions. Dream also defines reality as without reality what shape could dreams have? Death visits not only at the end of lives, but at our birth as well. Thus, the solution to who should take possession of the vacant underworld seems obvious in retrospect. Heaven must exist to give Hell meaning and vise versa. However, what really makes this scene still striking after all these years, is the palpable anguish of the angel who has been cast out, not due to any fault of his own, but in order to restore some cosmic balance. The silent acceptance of his partner only underlines the pathos. 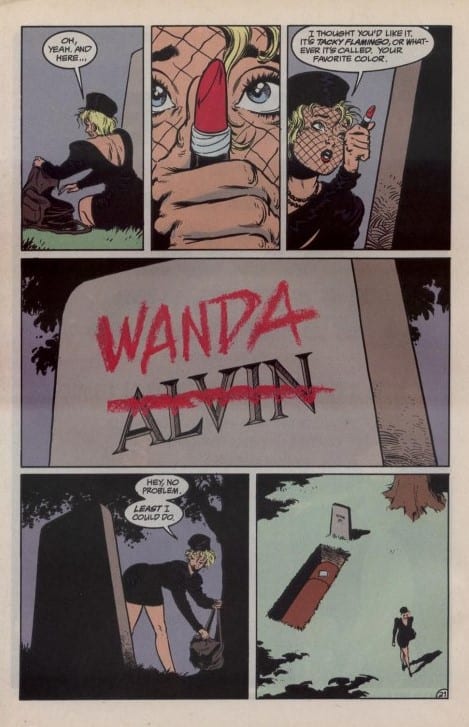 From the beginning, Sandman was at the forefront of comics’ representations of alternate sexuality. No where is this as clear as A Game of You. Wanda was most likely the first authentic trans character I ever read, and her tragic story remains powerful. This scene touches on how everyone has a private world within and riffs on Wanda’s childhood fondness for a Bizarro type comic book character. In a series full of somber farewells, this is one of the most poignant.

Speaking of mortality, there is this sequence from Brief Lives. Death is the same for us all, whether a newborn infant or millennia old ancient one. There is no  intrinsic value in simply accumulating years — it is the quality of them that matters. A powerful, if at times hard to accept, truth . . . 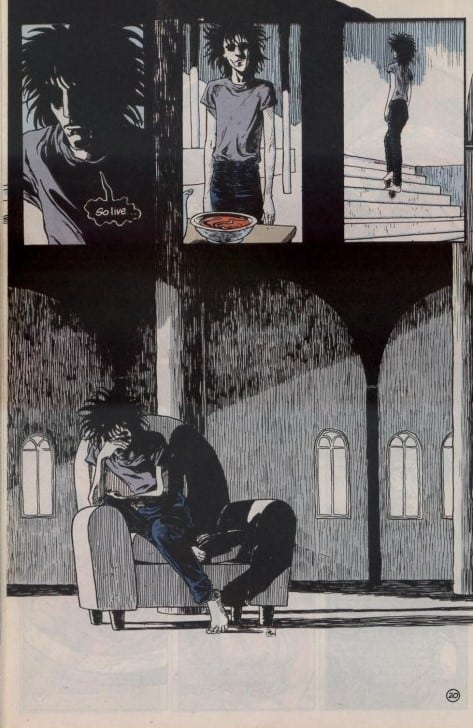 Over the course of the series, many of Dream’s past mistakes come back to haunt him, but, arguably none so bitterly as his treatment of his son Orpheus. After centuries of emotional distance, the only amends left for the father was to accept his son’s request to be euthanized. Thompson’s minimalist art resonates with both Dream’s grief and guilt . . .

“And the world went mad” from Sandman #53 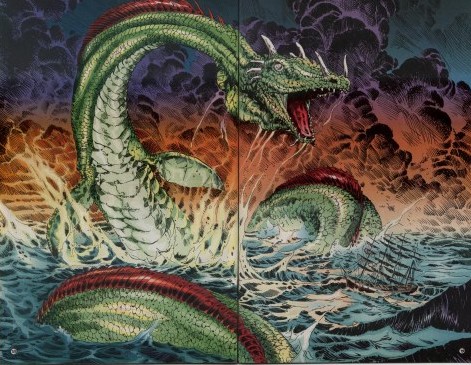 Not enough is said these days about how amazing an artist Mike Zulli is. His stunning rendition of this sea serpent from the Hob tale in World’s End has long been stamped in my memory. And the most impressive part? This was not even the best art he turned in for the series . . .

One of the side pleasures of Sandman is seeing Gaiman’s take on the Norse Pantheon. For example his version of Thor as a dim-witted, boastful muscleman is an entertaining contrast to the more noble version with which fans are more familiar. His Loki meanwhile is downright chilling in ways his Marvel counterpart has rarely been. In this masterful monologue, Loki addresses a character peripheral to the plot. While on one level literary meta, it is also a resonant statement on the human condition. We will die without ever knowing the full story of the events we have experienced or the people whose paths we have crossed. That is all our tragedy . . . 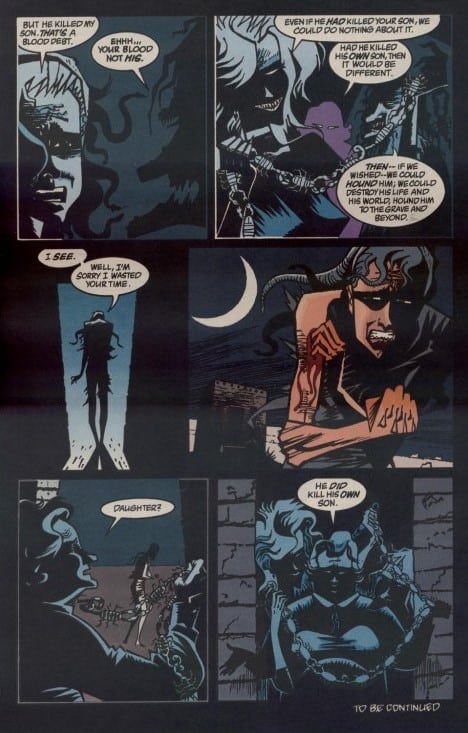 More than any other arc of Sandman, The Kindly Ones was a bit of a naIlbiter, especially when it came to Gaiman’s newfound love of emotional cliffhangers. Pretty much every issue left readers mumbling “oh ^^^^” to themselves. There are a few others I considered citing (Matthew the Raven’s calling Death to her brother’s side comes readily to mind). However, this proclamation of the Furies (aka Eumenides aka “The Kindly Ones”), has always stood out in my mind. It was the moment, where it became clear for the first time just how dire Dream’s situation was. It also serves as reminder of how well all the various threads of Gaiman’s long running narrative came together for the series’ climax 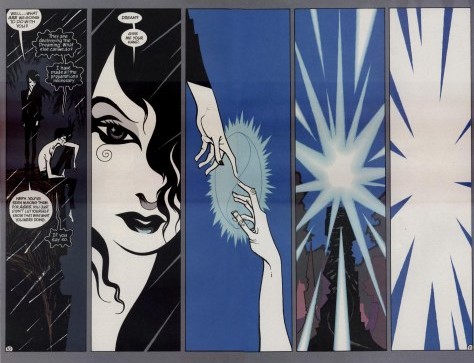 By the rime this issue arrived, the writing was clearly on the wall.  Morpheus’ final fate may have not been a surprise, but Gaiman handled it beautifully. Death even tries one last time to cheer up her brother, before fulfilling her own function. Lovely . . . 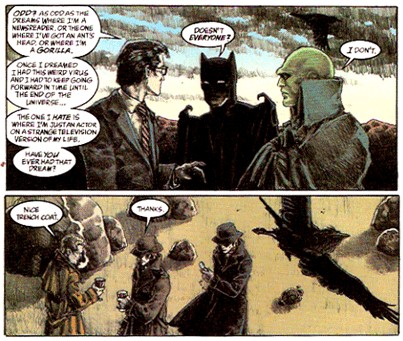 Lest anyone forget, even after Vertigo started, Sandman took place squarely in the DCU. In The Wake, countless dreamers witness the funeral for Morpheus, Lord of the Dreaming. Gaiman takes a break from a string of solemn eulogies to offer a bit of affectionate poking at some familiar faces. J’onn’s “I don’t” is priceless. (Later on, readers would glimpse Darkseid in attendance as well).

The Wake ends as the mourners one by one wake from their slumber. The ceremony is over and the dead laid to rest. Now comes the next morning, the future. The child Daniel has transformed into the new Dream and steps forward to meet his siblings for the first time. Beforehand though Matthew offers up a little pep talk in his own distinct, winning manner. Here is a page where it all comes together: Gaiman’s knack for character, his lush evocative narration and some gorgeous art from Zulli. 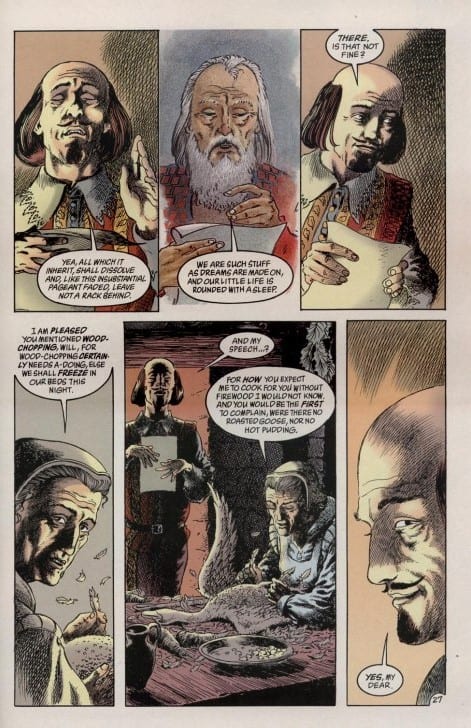 Early in the series, Dream is seen striking a bargain with a young playwright by the name of Will Shakespeare. Dream will provide the inspiration, if Shakespeare will furnish him two plays celebrating the power of dreams. The first A Midsummer Night’s Dream, was examined in the award-winning issue of the same name. It’s a stellar comic, but my sentimental favorite will always be “The Tempest.” Gaiman’s portrait of the author is compelling. His Shakespeare is an aging man concerned with legacy both in regards to his family and his work. I love how this page depicts the joy found in his writing, the sly grin he gives his wife at the end. Vess’ art, as throughout the issue, is stunning. The page is a warm snapshot, though only half the story . . . 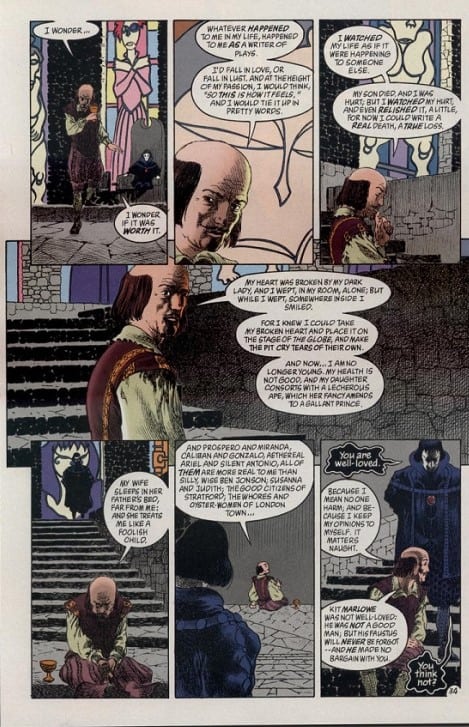 Shakespeare looks back on his life and sees only a heartless striver. He was more a writer than a man. Did he mourn the loss of his son? Of course, he did. Yet, at the same time, the gears in his mind were already shifting: I can use this, “for now I could write a true death.” His life was lived through a filter, all experience was potential material for a new play. In the end, he gained the fame and fortune he desired, yet again, was it worth it? Any creator who is honest with themselves can ask the same question. Again as a young writer myself this scene struck me profoundly. My own expereince since has taught me that there is a fair amount of truth behind it. The final lines of dialogue in the series is Shakespeare reciting the last verses of The Tempest:

“As you from crimes would pardoned be,/Let your indulgence set me free.”

One could easily imagine Dream, alone in a darkened room, wishing the same thought on more than one occasion.

Then again, haven’t we all?