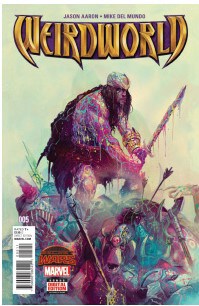 The first issue of this Secret Wars tie-in started with a bang: a full-page, stunning illustration of the barbarian hero Arkon locked in mortal combat with a menacing squidshark. Yes, squidshark. As absurd as that concept might sound Aaron and Del Mundo sold it from the very first beat. Del Mundo’s art had a visceral charge, matched by Arkon’s determined narration. It was a thrilling moment. It was also one that knew better than to take itself too seriously. “So swears Arkon, Lord of the Warlords. Arkon the Magnificent. Arkon the utterly lost.” This combination of adventure and whimsy set the tone for the entire series which this week comes to a fitting conclusion.

Throughout the last four issues, Arkon has been on a quest to find his lost kingdom of Polemachus. He was its ruler once, until, through devilish trickery unknown, he found himself exiled to the wilderness of Weirdworld. Emphasis on the wild in wilderness. Weirdworld is a sprawling territory encompassing many different terrains vaguely connected, but not limited, to realms of fantasy, Maps are useless as the landscape is always shifting. Nothing is certain. At the end of issue #4 readers learned that Polemachus was not even on Weirdworld; it was beneath it. Arkon’s life had literally been turned upside-down.

Today’s installment begins where #5 left off: a despondent Arkon contemplating suicide. In the issue’s first pages, he reels himself back from the brink (he was planning to jump into the abyss off the edge of Weirdworld) by refocusing his anger. Instead of internalizing, he externalizes. He is “too damn angry to die. But not to kill.” Luckily for him a target soon comes swooping into view: Baroness Morgan Le Fay, the tyrannical head of the domain. They have been stepping on each other’s toes for most of the series. It started as a competition for control of a dragon (the same one Morgan now comes gliding in on) and progressed from there. By now Morgan views Arkon as a dangerous upstart, while Arkon considers the Baroness the cause and origins of all his troubles.

#5 is centered on this confrontation between Arkon and Morgan along with the various other parties that come to their aid. Aaron takes this opportunity to call back several of the characters seen during Arkon’s wanderings. While these detours had been fun, I assumed that they were not essential to the main narrative. Aaron demonstrates otherwise by having them come to Arkon’s defense when he is most in need. In one way or another he lent them his support in the past; now they raise their arms in his defense, charging headlong into battle under the battle cry of Polemachus.

And what a battle it is. Del Mundo illustrates the initial clash of forces with a stunning two-page spread. It is a lush, vibrant action filled image. It is rich in detail, always leading the eye someplace new to explore. It bursts with creative energy. Similar to #1’s opening, it is a moment which sums up the feel of the entire series: dynamic and imaginative. Also similar to #1 there is even a bit of whimsy: a pair of butterflies gracefully preparing to drop an atom bomb into the melee. It is the best visual gag of the week. As he has throughout the series, Del Mundo does lovely work for #5. His hazy coloring (assisted by Marco D’Alfonso) in particular tinges everything in the proper mood.

Aaron does his part maintaining the ambiance right to the final page. Without giving anything away, Aaron honors the absurdist aspects of Weirdworld, a land that appears to exist without rhyme or reason. Lives are at the mercy of arbitrary cosmic forces beyond our paygrade. At any time, the metaphysical reset button could be hit and, well . . . All the resolute hero can do is square his shoulders and soldier on. In the end, is that not the human condition?

Weirdworld has not only been one of the best Secret Wars tie-ins but one of Marvel’s best series of the year. Full of thrilling action, fabulous art and flavorings of humor, it has been a delight to read. It is only fitting that Aaron & Del Mundo’s final chapter should be This Week’s Finest. 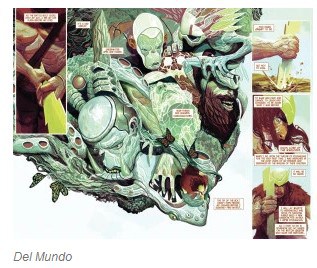