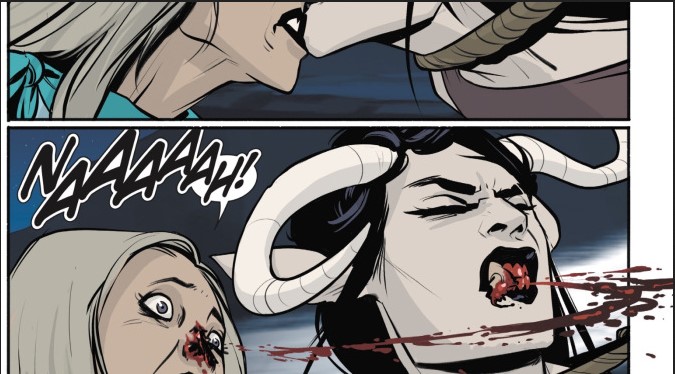 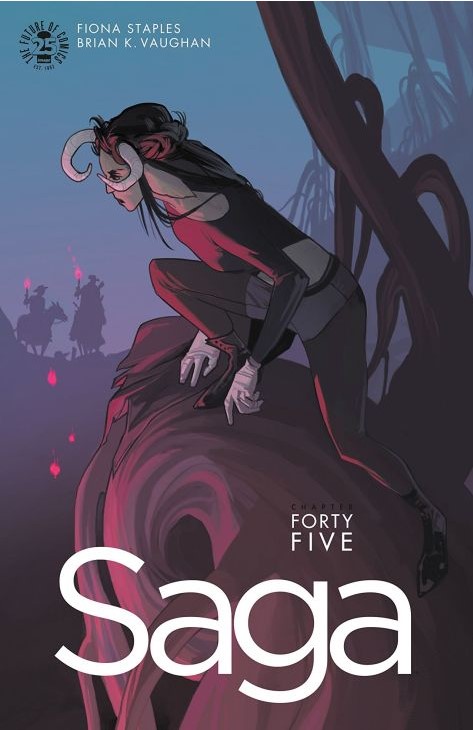 Do you think when Brian K. Vaughan and Fiona Staples are discussing Saga concepts, they know when they hit the jackpot? I mean, they have a ton of amazing ideas in these forty five issues, but every now and then they have an idea that is elevated to genius level. I can’t help but wonder if they get extra excited for certain issues to come out. Are they just chomping at the bit to reach the issue they think is next level? Honestly, with the high level of quality that Saga is month in and month out, they are probably always excited for that next issue to hit the stands. When it is all said and done, and the final installment of Saga is released for the last time, I would like to know what Brian an Fiona’s favorite part of the story was, because for me, it’s right here.

This arc is taking place on the planet of Pervious where Marko, Alana, Hazel and Petrichor are trying to find a way to get Alana’s miscarried baby out of her body. Alana has been experiencing magical fits, which in one instance saved the groups life, but it is taking it’s toll on her. Whenever you projectile vomit black sludge because of the foreign magic power your miscarried fetus is passing onto you, it is definitely time to get that child out. This brings us to where the last issue left off. Alana sees her dead son at around the same age as Hazel while they are on a train heading towards a baby removal solution. In this issue, we get an explanation of who that boy is. This is the next level genius shit I’m talking about. Like Saga often does, this intergalactic space opera grounds us in a sobering manner with a heartbreaking look into what it could possibly be like to be the mother of a miscarried baby. The boy, Kurti, is a projection created by Alana. It is a Wreath spell which can determine the outcome of certain events. High Clerics of Wreath would use it to determine the outcome of battles. In this instance, it’s showing the family what their son could have been like. No sooner after Marko and Alana figure this out, Hazel wakes up and starts to interact with Kurti. The joy of seeing Hazel interact with her brother is heartbreaking for the parents, this is where Vaughan and Staples hit you over the head with it in the best way possible because it is literally breaking Alana’s heart. There is a high chance of her going into cardiac arrest if she keeps the spell up too long. Seeing a life that could have been, right in front of her, is killing her. If she lets that sadness consume her it will destroy her, and for a short time, it does.

The spell gets to Alana and she has a heart attack.  In one of the best father-daughter moments you will read in a comic book this year, Marko has to talk Hazel through the spell that can save her mom. It is an electricity spell to jump start her heart but Marko is too powerful to perform it. So, he tries to calm Hazel down and walk her through the spell. One of my favorite things about the spells in Saga is finding out what fuels them, and in this instance, the spell is fueled by doubt, which is perfect for the occasion. It’s basically a case of harnessing fear in a moment and overcoming it. While this is a very dramatic scene, I think we know that Alana is not going to die here in this field. Instead, it’s more about a family having to come together to get over a tragedy which is heavy on all their hearts. A miscarriage can destroy a family. It’s hard on all of its members, especially the mother when she starts to think about the child she might have had. It is up to the rest of the family not to be strong and present a composed life, but instead be vulnerable and lean on each other. This family has gone through a lot of horrible shit in forty five issues and it’s always excited to see how they will move forward.

The Kurti story is what makes this issue great, but I couldn’t leave you without mentioning the suspense of the issue provided by Petrichor having a run in with some bandits. This is a good old fashion shoot out where the hero of the scenario is outnumbered and despite putting up a decent fight, ends up hanging from a rope. Petrichor often wears her character on her sleeve, but this exchange with the bandits really shows us what she is made of. Petrichor basically tells a fantastic lie that gets her out of trouble with the bandits. They are even ready to do her a favor until she bites the nose right off of one of their faces. Which is where my favorite page of the week comes from, broken down into three panels with the middle being the actual nose ripping, blood spurting panel. Some really fantastic work here by Staples. She is the best in the game right now and it is pages like this which are logged as evidence.