My Experience with Comics Piracy 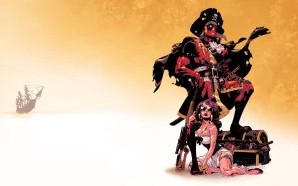 In all the recent discussion about the health of the comics medium, none of it has been about comics piracy. Even a few years ago, very few articles dealt with the issue due to a lack of readily available facts and difficulty in research. Here I’ll share a perspective that I think is a new angle, in that I used to know comics pirates and even shared their stolen goods…

Comics piracy, at its most basic core, involves illegally downloading/viewing digital comics to avoid paying distributors or the publishing companies. While the reward is free comics, its at the detriment of retailers and all the creators who spend hours producing the work.

We’ve all seen, and presumably rolled our collective eyes at, those ads playing on DVDs and Blu-Rays warning about illegal downloading and how it harms the economy. Just now I realized how ironic it is those ads play on movies you’ve most likely purchased anyway. Still, piracy does have a negative effect on the movie industry. Before it became a widespread issue, movie executives could roughly predict a film’s success via its box office and home video sales. Many of our favorite cult movies likely would never have been made unless it was seriously considered their DVD sales would recoup the cost of a box office failure. But now, with every single new release available for download at zero cost all the math is meaningless to predict a film’s potential performance. The people that might’ve paid $12 for a B-movie starring a C-list actor could stay at home and save that money, meaning the movie is an even bigger wash at the box office. So execs are less likely to take risks on films that are not guaranteed to make some profit, and that leads us to now with constant reboots of hot garbage and cliched stories that seem like TV movies.

So that’s films, what about comics?

Comics are nowhere near as lucrative as movies, but they’re arguably better for storytelling and rewarding creative talent. They’re not millionaires running around in sports cars doing cocaine (anymore), they’re working joes sacrificing better money and security to do what they love. With a smaller audience, and inherent difficulty with publishing, they have enough problems without losing money with their work being available for free on the Net.

Now, I used to work with people who cared about none of this. They habitually downloaded all of their media. It was convenient, and the job pay was decent but hardly enough to pay for cable, movie tickets, food, gas, car insurance, rent, etc. Initially, I thought these people were cheap jerks. It seemed cool having shows and movies right at their fingertips, but they constantly were bored by it and wanted something “new and better”.

The guy in charge of pirated files, the supplier, the “pusher-man”, was a jolly 6’2 30ish guy. By far the nicest guy I’ve ever worked with, and definitely one of the top 5 biggest Batman fans ever. When he found out we both read comics, we had dozens of discussions on Batman, Superman, Jim Lee (who he considered the best artist living), whatever was mainstream and common conversation fodder. Eventually, he offered me a flash-drive full of comics as a gesture of friendship. I took saying to myself “ok, just this once I’ll indulge. I love comics, I pay every month for new stuff so it evens out.” Of course, he kept offering me stuff and I kept taking it. He asked me what books I wanted, and I asked for stuff I knew I’d never be able to afford and he found them online for free. Before he he moved on to greener pastures, he sold me some of his prized hardcover collections to help pay for his new apartment and impending nuptials and I was happy to do it. He had some pretty cool books and they were in stellar condition.

I’m sure this guy doesn’t fit the image you would think of when you imagine a pirate and he could be atypical from others out there. I never did get a solid reason for why he pirated comics, other then him mentioning “There’s a lot of crap out there, so I tend to just skim through it until I find something good.” Why he downloaded the same stuff every month if he had decided it was crap, I’ll never know. Something else that I find interesting is how little he paid attention to what was happening outside of the books themselves, like new projects that were announced, or when books came out (he often asked me when comics were coming out as he usually had no idea). Granted, I’m pretty heavy into this thing called comics but he had this routine going on for years. I suppose that when something you love becomes something easy to attain and unlimited in availability, it holds less value to you.

Sure enough, all the files and data that I received from my coworkers has sat untouched by me. I’ve viewed less than 10% of it over a period of 2 years. That could just be my personality, most of Marvel Unlimited library hasn’t been read either despite paying $10 a month for it. However, based on my old coworkers behavior I think that treating something you enjoy as free really does render it boring. Without going to the store to physically obtain it, or using a credit card to pay for it online, free comics seem to be meaningless.

The reasons for pirating, aside from price and easy access, are mostly gone. Digital copies are available the same as the paper releases. Multiple apps exist to store comics on many devices, even publisher specific ones for their die hard fans. Retailers and whatever book stores still operating are carrying a more diverse stock to appeal to as many customers as possible. Really, pirating just seems like selfish preference instead of any kind of necessity.

I feel more than a little guilt for indulging in the practice. I like to think of myself as an honest person who legitimately loves and supports comics and so I plan on never reading pirated comics again.

I’m curious to know if anyone else out there wants to share any experiences they’ve had with pirates or illegally downloaded comics. Do you become bored with the easy accessibility, does it effect how you enjoy their quality?