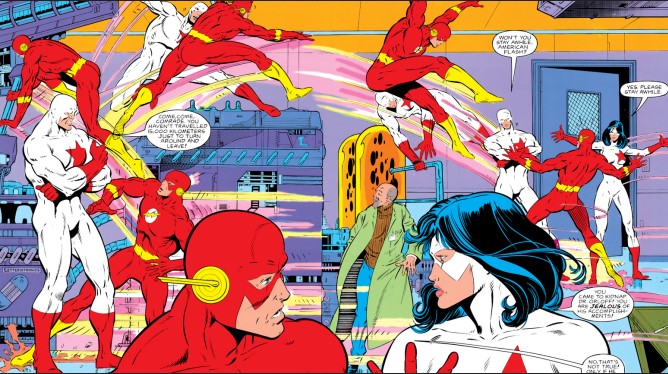 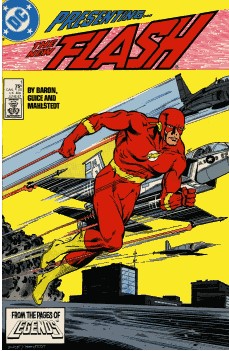 Last year as part of Nothing But Comics’ celebration of 75 years of scarlet speedsters, I turned the spotlight on Jay Garrick and Barry Allen. However, time ran out before I was able to tackle the third person to hold the title of The Fastest Man Alive: Wally West. Long a fixture of Barry Allen’s life, Wally’s promotion from kid sidekick to adult legacy hero represented a bold choice on DC’s part. Barry Allen’s debut in 1954 had given new life to the superhero genre, ushering in The Silver Age of comics. Thirty-two years later, his death played a pivotal role in the events of Crisis on Infinite Earths, the DC mega event which is one of the markers cited for the ending of the industry’s Bronze Age. When the smoke cleared Wally West was poised to help lead into DC into a new era.

The DC Universe post-Crisis was a blank slate which editorial allowed its talent to explore in a variety of ways. Frank Miller and Mike Grell built on the 1970’s work of Danny O’Neil, plunging their heroes deeper into the grime of urban crime and social unrest. On the other extreme, Keith Giffen and J.M. DeMatteis restructured the Justice League into a character driven, humor filled romp. Blending these two poles was Mike W. Barr’s Detective Comics run which found room for both Robin’s quips and Batman’s brooding. Meanwhile, Alan Moore and Grant Morrison (joined in a couple years by Neil Gaiman) were laying the groundwork for what would become DC’s greatest achievement of the next decade: Vertigo Comics. All in all, it was a period of renewal for the company, which created an environment well suited for a new Flash.

While Wally first donned his mentor’s uniform in #12 of Crisis, his new solo title did not debut until a year later (1987). At first glance, writer Mike Baron adopted a straight-forward stay the course approach to the character. The issue opens with Wally’s Titan teammates throwing him a surprise birthday party. Over the course of the next few issues multiple Titans would cameo in Wally’s book, most notably Cyborg. Wally would also frequently avail himself to the resources of Titans Tower. As eager as Wally is to correct anyone who mistakenly calls him Kid Flash, he sees no need to cut himself off from that part of his past.

What is more intriguing, however, is how Baron scripts Wally’s coping with recent events. Despite the fact that Crisis has faded from the horizon, Wally is still processing Barry’s death. To make matters worse, fate keeps tossing new obstacles in his way: low income, Vandal Savage, winning the lottery, his girlfriend Francis Kane leaving him, battling a deadly A.I. virus, falling for a married woman, stalked by her powered up jealous husband, traveling to Siberia to save said estranged spouse’s life, and being dragged into the Millennium crossover in a very personal way (i.e. dad was not who he always seemed to be). And that is all in the span of a mere eight issues. Much of this is the standard approach to serial storytelling, pilling on the plot twists to keep readers returning for each new installment.

At the same time, Baron portrays it having a toll on Wally’s personality. Instead of bouncing back from each encounter, Wally grows increasingly weary. Almost all of these issues end on a cliffhanger or similar note of inconclusiveness. For example, having defeated Vandal Savage in #2, Baron concludes the issue with Wally’s asking Francis to move with him into the new palatial home he has purchased on Long Island. The final panel depicts Francis’ startled speechless reaction. Then at the beginning of #3, Wally comes home to discover that Francis has left him, explaining that she needs time for herself.

At first, this whirlwind narrative shift seems to lack transition (Baron does not even provide a caption for how much time has passed between chapters), yet it reinforces Wally’s sense of disorientation. Events keep happening outside of his control; barely has he caught his breath than something else is on his plate. The longer this continues, the surlier his personality grows. He is tempted to pick fights with city officials concerned about the potential collateral damage caused by having a superhero as a neighbor. He rarely smiles, instead he walks around as if ready to punch someone at a moment’s notice. It is a dour take on the character, which Baron likely intended to set off the new Flash from his more good-natured predecessor. It also allows him to dip into the tides of contemporary relevance that were increasingly flowing through the DCU at the time.

The best example of this would be Wally’s relationship with Dr. Tina McGee, the married woman with whom he begins a relationship. She is a nutritional expert at a Utah S.T.A.R. Labs facility where Wally has gone to expand his abilities. They have an instant attraction to each other, which Baron convey in a charming, natural manner. She is also a decade older than the 20 year old hero, a fact he dwells on as much as her marriage. Tina insists that the marriage died long ago, continuing in name alone.

Baron never judges either party for this affair; indeed he constructs the story in such a way that the reader is rooting for them to be together. The husband, Jerry later Speed Demon, is abusive, beating Tina when she asks for a divorce. This plot choice injects social issues into the comic, though it is at the expense of Tina’s character. She never really recovers her agency. In fact, readers never see her doing much in the way of science; she exists more as a love object than anything else. It is an awkward two steps forward, one step back engagement with the women’s movement which is typical for the period. It is interesting that comparing Flash girlfriends from the 40s, 50s and 80s, it is Iris West who comes off as the most independent.

Art for these issues was provided by early career Jackson Guice. His art is still a bit rough at this stage in his evolution; his figural work in particular could use some refinement. His work here neatly resembles what was the current DC house style, giving little hint of the detailed, dynamic illustrations Jackson would provide twenty years later for Ed Brubaker. Still, there is a palpable energy to his action sequences, especially the ones featuring multiple speedsters piling onto each other. In these pages Guice captures the bursts of energy that come with their rapid movement.

All in all, these first eight issues of Wally West’s time as The Flash are an interesting glimpse at a hero still in development. Wally is grappling with his bearings, just as DC is experimenting with what they what the post-Crisis DCU to be. Over time writers such as Mark Waid, Giffen, DeMatteis and Geoff Johns would evolve Wally into the goofy, warm-hearted hero that fans remember so strongly today. Eventually Wally West would prove himself to be not only a worthy successor to Barry Allen, but, in the eyes of many fans, the greatest speedster of them all. These issues represent Wally’s first steps along that difficult road of self-discovery.